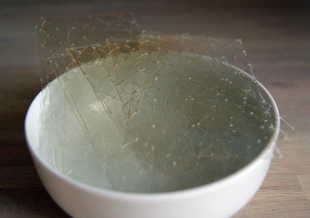 Gelatin plates for cooking and baking

Gelatine (often incorrectly referred to as gelatine ) is a mixture of tasteless animal proteins . The main component is denatured or hydrolyzed collagen , which is produced from the connective tissue of various animal species, particularly pigs and cattle.

Gelatine lacks the essential amino acid tryptophan , it is not considered a complete food protein . In unpurified form, gelatine is also known as glutine glue .

Gelatine is the name for jelly made from industrially produced gelatine, in contrast to gelatin (also called aspic ), which is cooked from raw materials rich in animal collagen. The basic recipe is made from broth or water, vinegar and gelatine in leaf or powder form and is used, for. B. used to tie parfaits , not to be confused with galantine .

Gelatine swells in water and dissolves when heated from around 50 ° C. It is a hydrocolloid , in which the gel formed (when cooling) becomes liquid again when heated. This gel / sol transition (see also: sol-gel process ) is thermo reversible and is also responsible for the fact that gummy bears melt in the mouth (and do not stick like starch products, for example). Gelatine is sensitive to temperature. If it is heated over 80 ° C for a long time, it is hydrolyzed and thus loses its gelling power more and more (measured in Bloom ).

Like all other proteins , gelatin has amphoteric properties. This is why there is a pH value at which the (positive) electrical charge of the amino groups is as great as the (negative) charge of the carboxy groups . This isoelectric point of the gelatine depends on the type of production (acidic digestion: pH 6.0 to 9.5, alkaline digestion: pH 4.7 to 5.6). Gelatin is the least soluble at the isoelectric point. This property can be used when determining the point.

Since hydroxyproline is only contained in significant amounts in gelatine in substance mixtures in the food sector (approx. 13%), the amount of gelatine added can be estimated well by quantitative determination of this amino acid. A differentiation from gelatine is collagen hydrolyzate , which is hydrolyzed by enzymes and sold as a dietary supplement .

To obtain it, the initially insoluble connective tissue from (mainly) the skin and bones of pigs and cattle, but also poultry and fish, is subjected to a digestion process ( hydrolysis ) that breaks down the peptide bonds so that the collagen that has been made water-soluble can be extracted. The digestion can be done by boiling (making a bouillon in the kitchen) or by treatment with acids and bases and subsequent extraction (industrial production). Gelatine can contain 1–2% inorganic substances and up to 15% water.

Gelatine on the display board "The recovery of the bone"

It is expected that around 450,000 tons of gelatine will be produced worldwide in 2018. Edible gelatine used in Europe is made from 80% pork rind (approx. 5 kg pork rinds make 1 kg gelatine). 18% of the gelatine is obtained from animal bones, another 10% from skins. Other raw materials are used to make the remaining portion (2%) of the gelatine.

Because of the BSE disease, guidelines for the manufacture of gelatine were set by the EU Commission in 1999 .

Fish gelatine is made from the collagen contained in fish skins, u. a. in order to comply with Jewish and Islamic dietary laws (see kosher and halāl ). Allergic reactions to fish are common. On the other hand, there have been no reports of clinical reactions to gelatin in commercially available foods. There are insufficient data from provocation studies with people who have a fish allergy and who have specific IgE to fish gelatine or who react positively to a prick test with fish collagen or fish gelatine. In 2004, EFSA assessed the data submitted by the Swiss fragrance and flavor manufacturer Givaudan as insufficient. Givaudan had submitted an application for approval of fish gelatine for the encapsulation of flavorings. On the other hand, it was also stated that it was not very likely that fish gelatin would cause a severe allergic reaction in the majority of people with fish allergy under the specified conditions of use.

The process used by most manufacturers for the production of gelatine is described as follows: The starting materials for the production of gelatine are connective tissue (skins and bones, cattle split ) from cattle, pigs, fish or poultry. For pretreatment, fat and inorganic constituents are roughly removed from the starting material and the material is crushed (bones are crushed, defatted and freed of calcium carbonate , calcium phosphate and calcium fluoride during maceration ; this demineralised substance is called ossein ). Depending on the starting material, one of two treatment methods is chosen:

The pretreated material is now soluble in warm water ( bouillon ) and is extracted over up to 5 stages with increasing temperature. The temperature determines the gelling power ( Bloom value ): the lower it is, the higher the gelling power; the extraction fractions obtained last at the highest temperature have the lowest gelling power. For cleaning, the extracts are separated from the remaining fat and fibers and filtered. Finally, calcium, sodium, remaining acid residues and other salts are removed.

The thin gelatin solution is thickened in a vacuum dryer to a honey-like consistency. The highly concentrated gelatin solution is sterilized, cooled and dried, during which it gels and the gelled mass can be extruded in noodle form onto a drying belt . The belt then runs through a drying tunnel, at the end of which the gelatine is dried to a water content of 10-15% and is still ground into particles of the desired size. For the production of sheet gelatine, it is not extruded in noodle form, but a gelatine film is produced, for which a wide-meshed net serves as a drying belt.

Beef cutlet ; Meat in aspic made from gelatin

Gelatine is partly used in semi-fat products and light products such as semi-fat margarine, semi-fat butter and low-fat cheeses, as well as a gelling agent for the production of confectionery such as gummy bears , wine gums , soft caramels , marshmallows , foam wafers, liquorice or chocolate kisses . Furthermore, the can in bakery products ( glaze ) and desserts (z. B. Blushing girl , jello , Mädchenröte , whipped cream ) in meat, fish and sausages such as aspic and aspic , mints and Christmas sweets, as well as fining agents in Drinks such as wine, cider, vinegar and all fruit juices that are not naturally cloudy, and in some countries even in beer are used. Fish gelatine has been used as a substitute for lysozyme and casein, especially since the onset of BSE and because of the Jewish dietary laws, to remove sediment and to reduce the proportion of tannin in wine production .

Gelatine can also be used as a means of encapsulating vitamin additives (e.g. in food or effervescent tablets). The vitamins are thus enclosed in a water-soluble manner and dissolve again on contact with liquid. 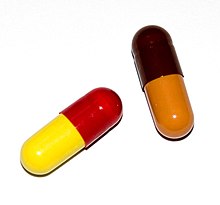 Gelatin is used to make hard and soft capsules . The medicinal substance, possibly processed with the necessary auxiliary substances, is filled into such gelatin capsules. Gelatine can also be used as a thickening agent to increase the viscosity of liquid medicinal preparations. From the large number of gelatine types, only gelatine A (obtained by acid digestion) or gelatine B (obtained by alkaline digestion) are used in practice. In medical technology , gelatine is used, among other things, to coat implants such as vascular prostheses .

Bovine gelatine in the form of polygelin as a stabilizer is or was contained in several vaccines , such as those against TBE , Japanese encephalitis , rabies , varicella and in the MMR vaccine . Although allergic reactions to vaccines with a frequency of around 1 reaction to 500,000 vaccine doses are rare, allergy to gelatin (in combination with thiomersal ) as an allergic reaction of the immediate type (up to anaphylaxis ) plays an important role and applies to around half of them responsible for all related complications, so this is now increasingly being removed from vaccines.

In emergency medicine , gelatine is used as a so-called volume replacement for the treatment of volume deficiency shock. Gelatine sponges, which are absorbed by the body, are also used to stop bleeding during and after operations. They can absorb up to 45 times their own weight in blood and serve as a cellular framework for wound healing .

Even in the early days of photography , gelatine was used in the so-called dry gelatine process. Gelatine is contained in the usual photographic films and photo papers , in some photographic high-quality printing processes it is the carrier of the pigment or chemical layer . Many photo printing papers for inkjet printing also have a gelatine coating and are therefore often used by manufacturers of classic photo papers manufactured.

In make-up making in film and theater or in rescue exercises, colored gelatine is used for realistic wounds. The organs, as you see them in hospital series, for example, are often made of gelatine. In the sport of paintball, it is also used as a cover for biodegradable ammunition. For the determination of weft ducts or the depth of penetration of a projectile is ballistic gelatin used.

In violin making, gelatine is applied directly to the wood as a primer after heating in a water bath, in order to ensure an even tint of the wood during later staining.

In addition to gelatine, the production of gelatine also produces by-products that are used further: meat bone meal ( e.g. as animal feed or fertilizer ), bone fat ( e.g. for soap production ) and calcium carbonate (e.g. for toothpaste production ). Metals, adhesives and particularly strong paper can also be produced with the help of gelatine.

Animal diseases such as BSE have historically led some consumers to avoid gelatin (especially as a food). In addition, gelatine is not vegetarian .

The results of the substitute processes vary greatly in their comparability with gelatine products.

Alternative methods of clarifying liquids work with clay , tannin , diatomite or asbestos . Instead of gelatin, however, are also casein (from milk), chitin (from fishing-waste production and biotechnology) and isinglass (a sturgeon swim bladder) is used. If gelatine is used as an auxiliary in production, it does not have to be declared as an ingredient. In these cases, their use can only be clarified, if at all, through direct product inquiries to the manufacturer. Gelatine-free products can sometimes be used for products from the pharmaceutical industry and other industries.