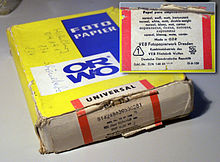 Photo paper or photo paper (short for photographic paper ) in the classic sense is a light-sensitive coated material, the base mostly consists of paper , for the production of black and white or colored reflective images by optical-photochemical means.

Inkjet printers and laser printers can use special art paper to produce prints in photo-like quality. These specialty papers for photographic use are also known as photo papers , but are not covered in this article.

Black and white photo paper is produced in different gradations or degrees of hardness, typically there is paper with gradations from 0 (soft) to 5 (hard). Gradation change paper is photo paper with changeable contrast behavior. Depending on the color used for exposure, a softer or harder gradation can be achieved.

Gradation change papers have a two-layer structure. The one layer, which has a hard gradation, is only sensitive to blue light. The second layer, which has a softer gradation, is only sensitive to green light. By adapting the corresponding light components with a so-called gradation change filter (either colored plastic film or by setting a certain light color in the color magnifier), either the exposure in the hard-working or that in the soft-working layer predominates. This allows all gradations between 0 and 4 or 0 and 5 to be created.

In 1866 Martinez-Sanchez and J. Laurant in Madrid developed the barite-coated paper as a base for light-sensitive emulsions. The classic photo paper for a black and white picture consists of a high-quality base paper, which consists of cellulose mixed with binders and fillers. If a white photo paper is to be created, optical brighteners are added to the cellulose pulp. Dyes are added for the chamois and ivory paper tones. Before the photographic layer is applied, the surface of the base paper must be smoothed. A white layer made from a suspension of gelatin and barium sulfate (also called barite ) is used for this. The barite layer stops the photographic emulsion from sinking into the paper felt and at the same time acts as an adhesive layer between the paper and the emulsion. A photosensitive layer is then applied. As is customary in classical photography , the light-sensitive layer consists of silver halide grains (technical term: suspended ), mainly silver bromide , in gelatine . As with other photographic materials, the photosensitive layer is also known as an emulsion , although it is actually a suspension . To protect against mechanical damage, a very thin layer of gelatin is poured at the end. Baryta photo paper is available in two paper thicknesses : 140 g / m² is called paper thick; 240 g / m² as strong cardboard.

The following layer thicknesses applied to the formerly common AGFA Brovira B1:

The silver halide in the photo paper is only sensitive to blue and violet light , which is why it can be processed in red or yellow-green darkroom light .

During exposure (i.e. the projection of a black and white negative with white light onto the light-sensitive surface of the photo paper; the time and intensity must be precisely controlled in order to achieve correct exposure) in a so-called enlarger (vertical projection of the negative image onto the work surface with the photo paper ; see illustration.) the photo paper is exposed. Then it is developed and fixed in various chemicals, then watered and dried. A drying press (see illustration) is used for drying . In conjunction with a high-gloss film and the appropriate photo paper (glossy), high-gloss prints can be produced. The durability of these prints is the highest of all known photographic materials, they can reach 100 years and more when properly stored.

The disadvantage of baryta papers is their high processing effort. In particular, the final wash must normally last at least 30 minutes, or 60 minutes if it is archivable, under running water, because during the previous development and fixation the photographic layer and the backing paper soak up chemicals that have to be flushed out with the final wash, otherwise the print is not durable. With an additional soda bath before the final wash, this can be shortened to 15 to 20 minutes.

Barite papers are therefore mostly only used for high-quality photo elaborations and for enthusiasts' purposes today. They have lost their importance for mass copies.

In the case of PE papers (also called RC papers, from the English resin coated ), the paper carrier is coated on both sides with a layer of the plastic polyethylene (abbreviation: PE). The PE coating prevents chemicals and water from penetrating the paper layer, which significantly reduces processing times, particularly during the final wash. It only takes a few minutes with running water. Drying can be done in the air , for example on a line for 1 to 2 hours (depending on room temperature and ventilation). It is faster with a PE dryer , which does this with hot air in a few minutes.

PE fume cupboards are more dimensionally stable than barite fume cupboards. One disadvantage is the lower durability: under ideal conditions, the polyethylene can last for up to 80 years, after which it can become brittle and become detached.

The image silver (the blackening of a real black and white image consists of finely divided silver oxidized after the development process ) is also less durable in PE prints. The paper layer in baryta paper prints can to a certain extent absorb harmful substances that affect, change or destroy the image silver and thus keep them away from the image silver.

Paper print from the 1960s with extensive light damage

Color papers differ from black and white papers in the type of light-sensitive layer:

In order to reproduce all colors as naturally as possible, there is a blue , green and red sensitive layer (from top to bottom) . During processing, dyes in the respective complementary color are created in these layers . H. Yellow , purple (also called magenta ), and blue-green (also called cyan ).

Accordingly, processing is also considerably more complex: the individual processing steps must be strictly adhered to in terms of duration and processing temperature in order to avoid color casts .

The vast majority of color images are produced from color negatives. The image quality is usually significantly better than that of color images based on slides, since negatives are specially designed for the subsequent production of color images (soft gradation , color masking to compensate for incorrect absorption of the layer dyes).

The task of color positive paper is to create a usable reflective image from the very high-contrast color slide. This is more difficult than it may first appear. The positive paper has to work very softly in order to reduce the high contrasts, because in contrast to the slide (approx. 1: 1000), a photo can only display a considerably lower contrast range (approx. 1: 100). The saturation of the colors also suffers from the flattening of the contrast . Nevertheless, the color image often contains eroded lights and tapering blackness.

This is why digital technology found its way into this niche area at an early stage: since the early 1990s, first the slides have been digitally scanned in order to produce color images from slides , the scan is automatically contrast corrected, and then the corrected digital image is exposed on color negative paper.

Ilfochrome paper (formerly Cibachrome ) is a notable special case among the color positive papers . It works according to a different physicochemical process than all other color films and papers, this process is called the silver color bleaching process , whereby the dyes are bleached to a greater or lesser extent in the course of the process, depending on the exposure. The dyes used are so-called azo dyes , they are brighter and more lightfast than all other photo dyes.

The disadvantage of the method is the comparatively low light sensitivity of the material and the high material price of the prints (not counting for photo paper plus processing chemicals, equipment), which is why it was never used on the mass market . 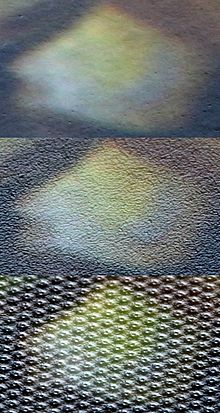 Since the gelatin layer, which serves as a carrier for the color pigments , has a higher refractive index than air, undesired reflections of the incident light occur on the surface . There are several ways to deal with these reflexes.

The most widespread is glossy photo paper and is now offered by many photo service providers as the only option for exposing photos. The surface is essentially smooth and the reflections are sharp , similar to a film or a sheet of glass. With glossy photos, the colors are perceived as brighter and more contrasting than with matt photos. Viewed objectively, however, this impression is based on an illusion . With optimal lighting conditions, for example illumination from the side when viewing the image from the front, an equivalent matt photo cannot be distinguished from a glossy photo with the eye. If you look at a glossy photo with sharp reflections with both eyes, the human brain is able to partially filter these out thanks to the spatial vision , as they are located in a virtual image plane behind the image. The subjective range of contrast, in turn, includes the photo including the interfering reflections. Therefore, the picture appears to be more contrasty than it actually is.

With matt photo paper, the surface consists of a disordered relief. This distributes the reflection over a larger angular range. The light reflections are diffuse . If the light source is far enough away (a multiple of the image size), unfavorable lighting conditions do not have a direct effect in visible reflections, but in an even reduction in contrast and color saturation of the entire image, since white light is added. Matt photos also look good from viewing directions from which glossy photos already show strong reflections, although they no longer have their full radiance. In optimal lighting conditions, matte and glossy photos are equivalent.

So-called silk or silk raster photo paper with a hexagonally arranged surface structure is also used. It also creates diffuse reflections and is supposed to protect the photo against copying. The price for copy protection , however, is that the rough structure is clearly visible to the naked eye .