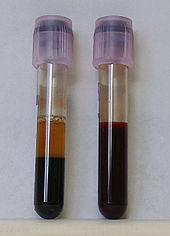 Example of a suspension: blood 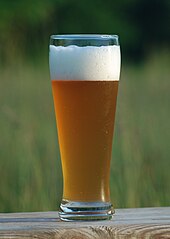 Example of a suspension: Hefeweizen beer

A suspension ( Latin suspendere , to hang up , to let it in suspension) is a heterogeneous mixture of substances made up of a liquid and solid bodies (particles) finely distributed in it . A suspension is a coarsely dispersed dispersion and tends to sediment and phase separate. The solids are "suspended" in the liquid phase .

If a suspension is left to stand, a solid with a greater density than the pure liquid (in contrast to a solution ) sinks slowly to the bottom and forms a sediment (sedimentation) with the particle size not too small . The supernatant liquid can be poured off ( decanted ) and thus the solid (sediment) separated from the liquid (decantate) . By adding so-called thixotropic agents or surface-active substances , sedimentation can be slowed down, and by adding flocculants it can be accelerated.

The stability of a suspension can be defined with a sedigraph . This measures the sinking speed of different particles according to Stokes' law .

The sedimentation can be accelerated by centrifugation .

One method for determining the material properties or the particle size and their distribution is ultrasonic attenuation spectroscopy .

Examples of suspensions are:

The liquid part of the suspension is often not a pure substance, but in turn a mixture: The carrier liquid can also be a solution , an emulsion or an unsedimented dispersion . Example: In sweetened milk cocoa, particles of cocoa components are suspended in a liquid that is an aqueous sugar solution and at the same time an aqueous fat emulsion. A sugared cocoa drink is therefore a "dispersion in a sugar solution".

Cow's milk is a dispersion of milk fat and protein in water. Other suspensions that look “milky” are also called “-milk”, for example

For medical suspensions, insoluble powders such as pharmaceuticals are suspended in carrier liquids. In contrast to a complete solution , the immiscibility of the constituents can lead to segregation due to the sinking of the solid particles due to gravity . From a macroscopic point of view, suspensions are therefore only homogeneous if they can be shaken up easily and quickly.

Such suspensions are used either externally or internally, for example on the skin, on the eye, in the body orifices or also intramuscularly.

Classification in the scheme of chemical substances