This article describes how to deposit and settle particles. On the concept of sedimentation in psychology, see sedimentation hypothesis . 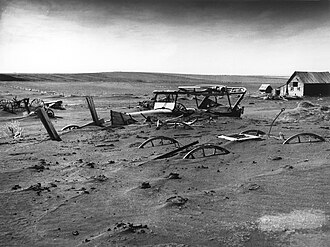 Property blown by severe sandstorms at the Dust Bowl in South Dakota , USA, 1936

Sedimentation or sedimentation (of lat . Sedimentum = sediment) is the deposition of particles from fluids or gases under the influence of the force of gravity or the centrifugal force . The layer of suspended matter that forms is called sediment , sediment or loose sediment . Unlike sedimentary rock is unconsolidated sediment , a loose rock .

In the case of currents , sediments are mainly brought in by the erosion of the cross-section. Another effect is the sediment input . Sediments (and other solids) from the catchment area are brought in here.

Inflow of the Rhone into Lake Geneva 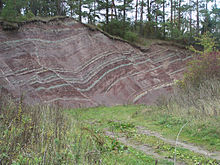 Cross-section of a thin-layer sedimentation sequence

Natural sediments can be divided into three main groups according to their formation:

The storage location is another option. Here, fluvial , limnic , marine , aeolian , glacial and pyroclastic sediments can be distinguished from one another.

In the case of natural sedimentation, the suspended solids are usually brought in by erosion processes and, in this case, primarily by fluvial transport , whereby the parent rock is usually preceded by weathering . Depending on the distance to the ablation site and the flow velocity, the grain size distribution of the particles carried in the water shows significant differences. The rule here is that the grain size of the particles decreases with distance and with a decreasing flow velocity, since the largest or heaviest particles ( debris ) sediment first and the flow is often no longer able to stir them up from the water bed.

Especially in stagnant water , these suspended matter form sediment layers through gravitational deposition, some of which are used to determine the age ( stratigraphy ). This is mainly due to the fact that, in contrast to rivers, there is no longer a current and therefore very small particles can also be deposited. In addition, depending on the climate system, the sedimentation often shows a different pattern in the course of the year, since the finer particles settle in a frozen body of water in winter, for example. Thus, similar to the annual rings in trees, coarser and finer layers develop each year, which are called varves . These often include living beings or their traces, which can develop into fossils in the course of fossilization . The formation conditions ( paleoclimate ) of the individual layers are also often documented in these, which is why sediments represent important climate archives . Marine, shallow marine and sea deposits in particular have a high informative value , which is why they also represent the main goal of climatological research boreholes.

While advancing sedimentation increases the thickness of the sediments, the rising pressure in the deeper layers can trigger further geological processes. The diagenesis forms the sedimentary rocks from the loose sediments . Snow represents a special case , which can also be layered and compressed to ice under the influence of pressure . If this effect lasts for several years, it can lead to the formation of a glacier .

The principle of sedimentation is used in areas of natural science, but also in everyday life:

In the production, storage and processing of suspensions such as For example, paints , casting resins , concrete or some foods, sedimentation is often a disturbing effect.