The title of this article is ambiguous. For attachments in dental technology, see matrix (dentistry) .

Boulder clay with boulder strewn in it; Clarification at Stolpe 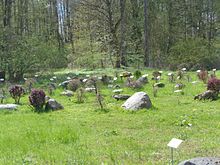 In geology and geography , the definition of bed load is limited to glacial sediments . The of glaciers deposited rock material forms in the unconsolidated state of glacial till ( karbonathaltig ) and -lehm (carbonate-free) or converted to solid rock, tillites . The coarser material within these deposits is known as glacial erratic boulder . It has in many cases due to the Eistransports characteristic scarring ( striae ) and then gekritztes attachment mentioned. Debris transported by the glacier is usually only rounded at the edges. Large debris (more than 1 m³) are known as boulders .

The history of bed load deals intensively with the individual rock, its formation and origin. It differentiates between sedimentary debris (from sedimentary rocks ) and crystalline debris (from igneous and metamorphic rocks ).

Boulders of Northern European origin are mostly igneous rocks such as granite or metamorphic rocks . Sedimentary rocks are much rarer, also due to their lower resistance. Attachments of rock types that have unmistakable characteristics and only occur in one area in Scandinavia are referred to as " guide attachments ".

In northern Central Europe, almost all types of bed load come from Scandinavia or the Baltic Sea basin, as in northern Germany, Denmark and northern Poland, solid rock only spreads out on the surface in a few, small areas. Debris from these deposits is mainly found in the vicinity of the standing area. Such so-called local attachments are the Holsteiner rock , the Sternberger cake or the Heiligenhafener rock .

Boulder lying on the surface of the earth was abraded by sand drifted by the wind. The characteristic Windkanter formed , especially numerous in the old moraine .

Church wall made of debris in Angermünde

A special category within the bed load is the guide bed load , whose area of ​​origin is narrowly defined and precisely known. They allow conclusions to be drawn about the path covered by the ice. Typical guiding attachments for northern Central Europe come from Scandinavia, e.g. B. the rhombic porphyries from the area around Oslo or the Åland- Rapakiwi from the Åland Islands in the Baltic Sea. In the Alps z. For example, Julier granite was used as a guide for the Inn glacier that flowed beyond today's catchment area in the Ice Age ( transfluence ).

The fossils recovered from Scandinavian sedimentary debris mostly originate from strata that are not exposed in Germany. They are therefore also valuable for collectors. These include trilobites , brachiopods and orthocerates ( nautiloids ) from rocks of the ancient world . Many fossil species are known to date only from boulders, including the famous Xenusion from the Lower Cambrian .

Glacial debris has been used as a building block in northern Central Europe since ancient times . Their use began in prehistoric times with the construction of the barrows . In the Middle Ages, numerous churches , but also secular buildings, were built from attachments ( field stones ). In modern times they were used to pave the streets. Attachments are currently popular in gardening and landscaping. Since 1990, numerous bed load gardens have been created in which valuable bed load is publicly exhibited.

In ecological hydrology ( limnology ) and in hydraulic engineering , solids transported by currents that slide, roll or jump on the river bed are referred to as debris or dragged loads . The term primarily - not exclusively - refers to fluvial sediments that are currently in the process of being transported or that have only come to a temporary rest. The term bed load is used to describe the bed load that is transported per second in a one meter wide stretch of water (in ).

In contrast, the geoscientific term gravel , which is similar in meaning, refers more - also not exclusively - to permanently deposited fluvial sediment.

The sediment load of a river consists of the bed load, the suspended suspension load and the solution load . The grain size, which represents the limit between the floating load and the bed load near the bottom, depends on the flow velocity at the bottom of the river, which in turn results in a certain balance of forces between gravity and inertia. It has been shown that the Froude number , which describes these relationships, roughly describes the limit above which a grain behaves like bed load (<19) or is carried along by the water (> 19). Due to the mutual friction of the pebbles, river debris is well to very well rounded and becomes smaller and smaller downstream. 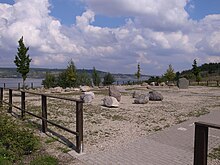