The title of this article is ambiguous. Further meanings are listed under Gneiss (disambiguation) . 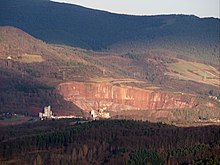 Gneiss quarry on the edge of the Palatinate Forest

The gneisses (old Saxon miner's name from the 16th century, perhaps in Old High German gneisto , Middle High German ganeist (e) , g (e) neiste "spark") are metamorphic rocks with a parallel texture that contain more than 20% feldspar . In the past (sometimes until the early 19th century), common names were: Gneus or Geneus .

Gneisses arise through metamorphosis , i. H. Transformation of rock under high pressure and at high temperatures. The starting material is covered by many layers of rock. As a result, gneiss only comes to the surface when either the overlying material has eroded or formerly deep layers have been lifted to the surface by tectonics .

Gneisses are widespread worldwide and are often found in the old cores ( cratons ) of the continents, where they were exposed by deep erosion . As a rule, these rocks have undergone several phases of transformation ( regional metamorphoses) since their formation . They form the oldest rock formations on earth, for example the Acasta gneiss from the Hadaikum of (4,030 mya) in the western Canadian shield and the gneiss-containing Nuvvuagittuq greenstone belt in the eastern Canadian shield. Gneisses also occur in the crystalline zones of younger fold mountains , e.g. B. in the main Alpine ridge of the Central Alps .

The composition of the gneiss depends on the source rock : the most important minerals in the gneiss do not form during metamorphosis, but are already present in the source material. Gneisses mainly consist of the mineral components listed in the following table (in%).

The structure fluctuates between fine and coarse-grained with a sometimes clearly visible parallel texture. In the latter case, we speak of regulated crystals . The rock can then appear layered, fibrous to coarse shale and often noticeably banded. In contrast to this, there are orthogneiss with poorly developed texture features and relatively uniform crystal sizes or only slightly crystallinity in the matrix .

Gneisses differ in their mineral composition, in their structure and in their genesis (history of origin).

Regardless of this, gneisses can also be distinguished on the basis of their structure : for example, eye gneisses are known when a fine-grained rock matrix "flows around" larger mineral inserts , or flaser gneisses when the structure is linear and fibrous and less planar and slate. Gneisses are often clearly banded.

It is also common to differentiate between the gneisses and their parent rock (educts). 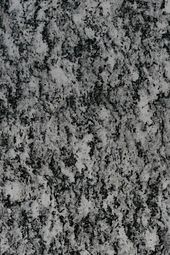 Granite gneiss , syenite - or debris gneiss they differ from chemical and mineralogical identical metamorphic rocks (such Metagranit etc.) only by its typical slate-like structure. Gneiss are also differentiated according to the degree of their metamorphosis as epi , meso or kata gneiss . The higher the pressure and the higher temperatures prevailed when they were created.

The layer structure ( foliation ) of the gneisses is created by segregation (segregation) of layers of light feldspars, quartz and dark minerals. This happens because of the different plasticity at different temperatures. Layered silicates (especially biotite ) tend to regulate themselves over a large area under tectonic stress through lateral recrystallization. Quartz and feldspars tend to remain grainy. The spatial position of the cleavage areas corresponds to the direction of the maximum tectonic shear forces .

Gneiss as a natural stone

Often, gneisses are also traded as "granite" because they have very similar technical properties to this rock group. However, they have a consistently higher water absorption and better flexural tensile values . As natural stones, they can be polished and are largely frost-resistant. The feldspars and mica determine the color, and quartz determines the abrasion resistance of the gneisses. Layered silicates give the gneisses their ability to cleave when they occur in layers in the rock.
Essential technical-physical parameters are summarized in the following table using the example of Erzgebirge gneiss.

The technical differences between para and orthogneiss are minimal. As a rule, the colored gneisses are either migmatite or orthogneiss, and the gray gneisses are paragneiss. The light (almost white) "gneisses" can also be granulites .

The professional association of German geoscientists has named gneiss Rock of the Year 2015.