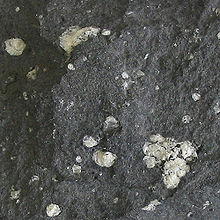 Andesite with secondary cavity fillings made of zeolite

Andesite in the route iron map

Andesite (also: islandite ) is a volcanic rock with a medium SiO 2 content (intermediate volcanite). Its plutonic counterpart is the diorite .

During his investigations on volcanoes in southern Italy, Leopold von Buch identified the mineral albite in rocks, which he suspected to be similar to trachytes. From his investigations in this regard, he concluded that there was a new type of rock . Taking into account rock samples that Gustav Rose had collected on the Aeolian Islands and the results of volcanoes from Humboldt's journeys in South America as well as other observations made by Franz Julius Ferdinand Meyen and Eduard Friedrich Poeppig on this continent, Buch concluded in his report to the Royal Academy in 1835 in Berlin on a comparable composition. Because of the widespread distribution in the Andes , he then coined the term andesite .

However, Alexander von Humboldt rejected his assessment or this proposal. Only Justus Roth brought the name back into the rock nomenclature in 1861. The rock was redefined by Friedrich Johann Karl Becke in 1900 on the basis of more modern mineralogical aspects as the effusion equivalent of diorite . Walter Ehrenreich lists Tröger as a type locality near La Hoyada ( Province of Catamarca ) in the Argentine Andes.

The professional association of German geoscientists chose andesite as rock of the year 2020.

Andesite is a volcanic rock (“ effusion rock ”) that occurs particularly in subduction zones and in the volcanic zones of the oceanic ridges (for example on Iceland). Andesites are, in addition to their accompanying rocks , the dacites , rhyolites and alkaline-calcareous basalts , the typical rocks of the island arches and orogenes . They appear in the form of lava flows , lava domes , as a component of pyroclastic deposits and volcanic breccias as well as corridors and storage corridors .

The rock emerges as lava at temperatures of around 950 to 1,000 degrees Celsius .

Andesites can be greatly changed ( altered ) in their mineral content by hydrothermal solutions . In the course of a metasomatosis, several new minerals are created in the parent rock. These by-products are called Propylite . The process of propylitization is not limited to andesite alone.

Andesites consist of 0 to 20 percent quartz and plagioclase feldspar , pyroxene , amphibole and biotite . In the absence of quartz, andesites lead to foids and are identified as foid-containing andesites . There are also garnet- and cordierite- bearing andesites; they are called garnet-bearing and cordierite-bearing andesites . If hornblende occurs, they are referred to as hornblende andesite . If olivine is present, andesite does not contain quartz (olivine is only formed if there is silicate undersaturation); andesites are close to basalts , but they usually have neither amphibole nor biotite and the proportion of plagioclase is low. Andesites usually have a brown-violet to gray color and often a porphyry structure . Porphyry andesites of the pre-Permian age are combined with other “old” intermediate volcanic rocks under the collective term porphyrite .

The synonym islandite was introduced by the British geologist Ian SE Carmichael, who studied the tertiary volcano Thingmuli ( Þingmúli ) in East Iceland around 1960. In doing so, he found a type of rock that was previously unknown to him, in which, in contrast to rocks from the mainland, the iron concentration also increased with increasing silicate content. He called this type of rock islandite. Today it is known as andesite. Islandite often contains porphyry particles ( zeolites , leucite etc.). The volcano Hekla andesite is currently erupting in Iceland .

In Europe, andesite is found in Greece in Krokees near Sparta in the Peloponnese , in Italy near Predazzo in the Bozener area and in the Euganean Hills , in Hungary near Szentendre , in Finland near Rovaniemi , in Spain in the Pyrenees near the place El Pont de Suert and in Germany in the Halleschen Mulde , in the Flechtinger mountain range and in the Saar and Nahe area . There are numerous mining sites in Hungary that mainly produce road construction aggregates and other crushing products. Most of the deposits are used for crushed stone and chippings and only a few types are marketed as natural stone .

Cultural and geographical significance of the Andesite Line of Oceania

The division into the three areas of Oceania : Polynesia , Melanesia and Micronesia comes from Dumont d'Urville , one of the last great explorers, who circumnavigated the world three times between 1822 and 1840. It is primarily linguistically and culturally oriented. The inhabitants of western Polynesia and Micronesia are relatively light-skinned, while the Melanesians are very dark to black.

The so-called andesite line (also andesite boundary ) is also decisive for the classification . It not only denotes a geologically distinctive boundary, but has also been of decisive importance for the different cultural development up to the social structure, religion and culture, also as a sign of how deep and direct even geological conditions are in the history of peoples influenced (not only through the spectacular volcanism or earthquake, but through the presence or absence of a single rock that was by no means directly used as a raw material). 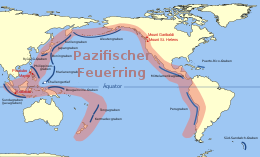 The term andesite line originated before the geology of plate tectonics was understood. It was first used in 1912 by the New Zealand geologist Patrick Marshall to denote the clear structural and volcanological boundary that stretches from east New Zealand to the Fiji Islands to north of the New Hebrides and the Solomon Islands.

The line is named after the rock andesite. It occurs as volcanic rock in many volcanic areas (in Germany for example in the Vulkaneifel ), especially on the volcanic edge ( Pacific ring of fire ) of the large Pacific basins , the course of which it roughly follows, and it ensures fertile soils in their surroundings, see above that the farmers accept the volcanism that is almost always present.

The line follows the western edge of the islands off California and passes the Aleutian Arc south along the eastern edge of the Kamchatka Peninsula , continues along the Kuril Islands , Japan , the Marianas , the Solomon Islands and meets the North Island of New Zealand . On the other side of the Pacific, the line runs northeast along the western edge of the South American Andes towards Mexico and from there back to the islands off California. Indonesia , the Philippines , Japan, New Guinea and New Zealand - they are all eastern extensions of the continental plates of Australia and Asia - lie outside the andesite line.

This geological fault line separates two large areas in the Pacific. In the area to the east of it, the islands consist mainly of the tips of submarine volcanoes, which also form coral reefs and atolls , and have very different climates , depending on their location in the wind, which brings rain or not. To the west of this are remnants of regions that were partially flooded after the Ice Age and consisted of Pleistocene sediments and metamorphic , silicic acid-rich andesite rock, with very diverse and diverse landscapes (so-called “high” volcanic islands with mountains, valleys with alluvial land, etc.), and Because of its favorable location near the equator, it also offered the best climatic conditions for settlement.

The islands east of the line, on the other hand , are shield volcanoes made up of low-silica, basaltic, thin-bodied lavas, created by hotspots (Hawaii) and oceanic transverse faults , and their structure does not correspond to the Australian continental plate , but to the oceanic floor . Because of the much poorer soils, they have far fewer resources than the western areas, and often only rise a few meters above sea level. In addition, there is often a lack of fresh water and the flora and fauna are relatively poor. A decisive reason for the cultural preference for andesite-rich areas is that the soils that develop on volcanic parent rock are extremely fertile because of the richness in various soluble minerals. The importance of this fertility is all the greater because, especially under tropical climatic conditions, the soils are often poor in nutrients or are very quickly depleted if, as in the rainforest, there is no biological nutrient cycle between growth and rotting.

The increasingly difficult conditions towards the east prevented the hunters and gatherers coming from New Guinea during the Pleistocene, who from 1500 BC. BC trained the Lapita culture , first of all to advance further into Oceania, so that this settlement only took place very late and after the turn of the century around 300 AD by peoples who had a highly developed shipping technology that allowed them to use theirs Obtaining food for the most part from the sea. These peoples have both linguistic and phenotypic (skin color, etc.) in common.