The Andes ( Spanish Cordillera de los Andes , Quechua Anti or Antis ) are the longest (above sea level) mountain range on earth and the highest mountain range outside of Asia. They form the southern part of the American Cordilleras , which are orographically interrupted in Central America .

The Andes stretch along the west coast of South America from Venezuela through Colombia , Ecuador , Peru , Bolivia , Argentina and Chile . With a north-south extension of 7500 kilometers from the tropics (at 10 ° north) to far into the extra tropics (at 55 ° south), they exceed the Rocky Mountains of North America (4800 km) by about half and are almost twice as long of the Himalaya - Karakoram - Hindu Kush system in Asia with its 4400 kilometers. In the south and in Ecuador they are up to 200 km wide. Between Arica (Chile) and Santa Cruz de la Sierra (Bolivia) the east-west extension is over 600 kilometers.

Due to their height, their length and their extension in north-south direction, the Andes offer a good example of several types of geographic change in shape .

The Andes consist of two, in some sections more, main chains running in parallel. In the middle section in Peru, Bolivia, northern Chile and northern Argentina, these chains are very far apart and enclose the central highlands ( Altiplano ), in which Lake Titicaca is embedded. The center of the Inca Empire, Cuzco , was north of this plateau. 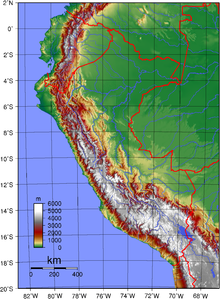 The division of the Peruvian Andes requires a distinction between northern and southern Peru. The mountain junction of Cerro de Pasco serves as a border where the three northern and the two southern chains unite. The north is divided into a western (e.g. Cordillera Blanca), central and eastern cordillera (Cordillera Huaguruncho). The inter- Andean long valleys of the Marañón and the Huallaga , between which the Cordillera Central rises, serve as a demarcation . The western Cordillera occidental serves as a watershed between the catchment areas of the Pacific and the Atlantic. The southern part of Peru is divided into the western (e.g. Cordillera Volcánica) and eastern Cordillera (Cordillera Huaytapallana). The longitudinal valley of the upper Río Mantaro and the upper part of the Apurímac valley to the south serve as the border.

Formation of the Andes

View of the Andes while approaching Santiago, Chile.

The Andes are a prime example of a mountain range over an ocean-continent subduction zone . In the case of the Andes, the oceanic lithosphere of the Nazca plate and, to a lesser extent, the Antarctic plate , dips below the continental lithosphere of the South American plate . Where the Nazca plate competes its way under the continental bloc, there is a deep-water channel , which in the Peru Trench (-6262 m) in the north and the Atacama trench is divided (-8066 m) in the south.

Subduction of the Nazca plate under the South American plate

The subduction of the Nazca plate under the South American plate began at the latest about 140 to 150 million years ago ( Upper Jurassic or Lower Cretaceous ), but initially without causing significant deformation processes on the western edge of the South American plate (so-called upper plate deformation). The beginning of the actual orogeny (mountain formation) is only set for the Eocene (45 mya ). The exact reason for this delay is unknown, but it is assumed, among other things, that the deceleration of the African plate in the course of the collision between Africa and Eurasia must have caused the South American plate to accelerate westwards from the Paleogene , since the opening rate of the South Atlantic has been increasing since Collision has not significantly changed Africa. This acceleration resulted in Nazca-South America convergence rates of up to six inches per year, greatly increasing the pressure the two plates put on one another. This is held responsible for the horizontal shortening and extreme thickening (up to 80 km) of the continental crust of the western edge of the South American plate, accompanied by vertical uplift. In the late Miocene (10-6 mya), especially the central Andes between 10 and 30 ° south latitude experienced uplift rates of just over one millimeter per year. This part of the mountain range is therefore both the highest at just under 7000 m and the widest at up to 800 km.

As part of the Pacific Ring of Fire, the Andes are an area of ​​strongest seismic and volcanic activity. The highest volcanoes on earth are here: The 6795  m high Monte Pissis ( Argentina ) and the 6864  m high Ojos del Salado (Argentina- Chile ). Post-volcanic phenomena such as solfataras , geysers and fumaroles are common.

The highest mountain in the Andes is the 6961  m high Aconcagua in Argentina on the border with Chile . This makes the Andes the seventh highest mountain range on earth after the Himalayas , Karakoram , Hindu Kush , Pamir , Tian Shan and Tibet, and also the highest outside of Asia. Between 99 and 117 peaks (depending on the source of the text and comparison of the heights of the notches ) reach heights of over 6000  m . The Argentine-Brazilian mountaineer Maximo Kausch holds the world record for the highest number of six-thousanders climbed in this mountain range .

More volcanoes in the Andes 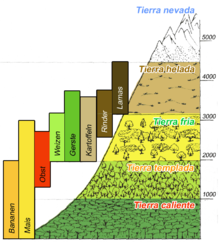 The altitude levels and their economic use

The highest biodiversity on Earth prevails tropical mountains as here in on the slopes montane rain , cloud and cloud forests of the eastern Andes of Ecuador, to the five mega centers of diversity include

The classic division of the tropical Andes into altitude levels was carried out by the Colombian Francisco José de Caldas , who related this to the respective agricultural uses of the Andes. Only Alexander von Humboldt and Aimé Bonpland used this classification in five stages for a botanical examination.

Four camel-like animal species are native to the Andes plateaus . The population has kept llamas and alpacas as pets for thousands of years , because frugality, perseverance and suitability for altitudes above 4000 meters made them important livestock as early as the Inca period. They were bred from the wild guanacos and vicuñas , which are still found in the wild. Guanacos live in small herds of up to 25 animals. The vicuna is the smallest of the Andean camels with a shoulder height of one meter. Due to its fine fur, the vicuna was almost exterminated and only strict protection regulations could preserve it in the high Andes.

Other typical mammals of the Andes are the spectacled bear that lives in the cloud forests of the tropical Andes, the Andean jackal , which occurs in five subspecies from Venezuela to Tierra del Fuego; two Andean deer species that grow slightly larger than a deer; as well as the two pudu species, the smallest deer in the world, which are hardly bigger than hares.

Numerous, sometimes endemic, bird species live in the cloud and cloud forests in particular . One of the most noticeable is the Andean cliff bird , which is found in the Andes from Venezuela to Bolivia. The most famous bird of prey in the Andes is the Andean condor , a New World vulture , which, with a wingspan of up to over three meters, is one of the largest airborne birds in the world.

Inhabitants of the central Andes for centuries: indigenous Quechua (women in the Saquisilí market near Latacunga , Ecuador) 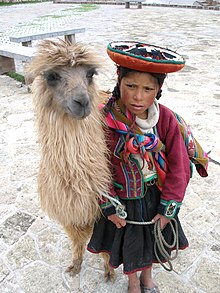 The central Andean region is one of the origins of the sedentary peasant way of life and the early high cultures of mankind. A number of food plants were cultivated here as early as the Neolithic . The potato, for example, was already used between 8000 and 5000 BC. . Chr domesticated . The so-called initial phase (2500–2000 BC) introduced the high Andean civilizations in the space between the coast and the Andes of Peru. The oldest city / culture is called Caral ; the last high culture were the Inca. Her most impressive and popular legacy is the city of Machu Picchu, located at an altitude of 2,430 meters above the Urubamba Valley in the Peruvian region of Cusco . The neighboring indigenous cultures of the Andes eastern edge and the Caribbean region were more or less strongly influenced by the advanced civilizations.

The European expansion to South America also began with the Spanish Conquista in the Andes region. Both the millennia of their own cultural development and the upheavals of the conquest by the Spaniards, including the massive attempts at conversion by the representatives of Christianity, have had a lasting impact on the inhabitants of the central Andes (especially Quechua and Aymara ).

Typical are the irrigation terraces , llama breeding, the worship of the Pachamama called mother earth and the colorful costumes , which are the result of a synthesis of indigenous and Spanish influences. Andean music is world-famous , as it is presented by street musicians from Peru or Ecuador in many European cities.

The southern Andes were only influenced by the high Andean civilizations in the north. This is where the realm of the Mapuche tribes came into being, which, through the use of horses, could expand very quickly to the east coast of Argentina and founded the equestrian cultures of Patagonia with numerous allied peoples. The Mapuche successfully resisted Spanish colonization for over 300 years. Their state (which was partly structured according to the Spanish model) lasted until 1883. Today the proportion of indigenous peoples in the Andes of Chile and Argentina is far lower than in the more northern Andean countries and their cultural heritage is barely recognizable.

The Andes are home to some of the former world's largest silver mines ( Cerro de Pasco , Potosí ) and the world's largest copper mine in Calama . Large deposits of sulfur and saltpetre can be mined in Bolivia and northern Chile . This led to territorial disputes between the two countries during the saltpeter war at the end of the 19th century . There are also many other minerals and valuable metals, the mining of which is of great economic importance, especially for the poorer Central Andean countries. An example in this context is the world's largest lithium deposit in the Uyuni salt lake in Bolivia.

The countries of the Central Andes have always been characterized by agriculture. They are home to the greatest (genetic) diversity of different food plants in the world. On the dry upland steppes , a has extensive remote pasture with alpacas establish. It is very similar to the old world transhumance .