extensive pig production in the Alps near Cimalmotto (Switzerland)

The extensive farming (from Latin .: extendere = "expand") refers to systems of animal production , which by a large-area land use with a low stocking density with less use of other production factors are identified. It is the opposite of intensive animal husbandry .

In most cases, no additional feed is necessary and the cattle are often on pasture all year round. In order to prevent damage from overgrazing , several animal species are often combined, which put different strains on the sward and result in an ecologically sensible grazing pressure . In addition, this is the reason for the previously nomadic forms of remote grazing , which is still the most sensible and most frequent form of use of the sensitive natural pastures in the arid regions of the world. ( see also pastoralism )

More than a quarter of the earth's total land surface is used extensively for agriculture in this way .

An animal husbandry process is extensive if at least one production factor (labor, land, capital) is used extensively, i.e. only marginally. The aim of extensive livestock farming is to still manage mostly low-yield agricultural areas profitably. In the densely populated ecumenism, there is also the preservation of cultivated landscapes in terms of nature conservation.

The unit of measurement for the livestock population is usually the livestock unit (GV or GVE), which stands for a cattle or a camel or, for example, 10 sheep or 12 goats.

(The following values ​​must not be seen in relation to the average values ​​of different countries - as mentioned in the article Stocking cattle - because extensive and intensive systems are included in the calculation.) 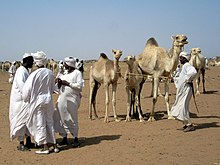 Camels are far better adapted to the sparse vegetation of the desert than cattle, so that the cattle-based livestock units basically only allow a rough orientation. 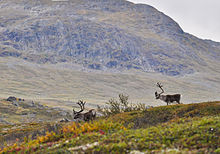 Since the same applies to reindeer as to camels, their stocking is given in numbers.

Sheep herd of the Kuchi nomads of Afghanistan: In the arid regions of the world, extensive animal husbandry, both for self-sufficiency and for the market, has so far been without an alternative.

The origin of extensive animal husbandry lies with the shepherd nomads of Asia and Africa. All of the resulting systems of so-called "remote grazing" are still extensive today. In contrast, the proportion of traditional self-sufficiency is steadily declining in favor of market-oriented production.

Stationary extensive livestock farming systems are just as old in humid savannah areas as nomadism. They are mainly found in Africa. Modern stationary systems in arid regions with own feed production and low stocking density can be found e.g. B. in the Altiplano , the Cerrado , in the western USA or the Sahel zone .

Intensive animal husbandry is predominantly carried out on the originally artificially created grassland areas in the densely populated areas of Eurasia and America. Here, as a traditional extensive form, there is still alpine farming in the mountains (mainly Alps, Norway, Pyrenees, Carpathians). Due to various problems following the intensive husbandry, an extensive strategy has been established again in the agricultural regions since the last third of the 20th century : modern ecological animal husbandry .

In summary, extensive animal husbandry can essentially be broken down into the following criteria and combinations: