Ranch is a redirect to this article. See also: Lars Ranch , The Ranch , Rensch and Rentzsch .

Ranches are farms in the middle of unsettled, naturally created open landscapes

The term ranching describes the stationary form of extensive animal husbandry in naturally created open landscapes (form of so-called pastoralism ). It is mainly found in the temperate and subtropical short-grass steppes of North America , South America , South Africa , Australia and New Zealand . The name is derived from the term “ranch”, which means the seat and home of a cattle farmer. In Australia and New Zealand one speaks of "cattle or sheep station", in South America of estancia or fazenda and in southern Africa of farm .

Cattle is mostly produced on a ranch, and sheep is also produced in very dry areas ( e.g. Karakul sheep in Namibia ). Due to the better adaptation to the ecological conditions, wild animal husbandry is sometimes also used today (for example bison or guanaco ). The herds are looked after by more or less semi-sedentary herders (depending on the country, cowboys , stockmen, vaqueros , gauchos, etc.). In most cases, meat and leather are produced. Additional farming is rare.

Ranching is the main form of land use in areas that are too dry for arable farming: such as semi-arid dry savannahs and steppes beyond the agronomic dry lines . Due to the lack of precipitation, this form of agriculture is tied to very large areas. The minimum size of a US ranch is 500 hectares. In the Great Plains and the intramontane basins of the Rocky Mountains , over 100,000 hectares are reached, in Patagonia up to 200,000 hectares, with the largest areas in the driest regions. To a lesser extent, ranching is common in semi-humid to humid grasslands such as the Pampa Humeda in southern South America and the Llanos in northern South America, as well as in some regions of the prairie states of the USA. Here, however, there is an increasing displacement through the creation of new arable land .

In contrast to the traditional forms of mobile remote pasture farming , the ranchers usually live within the pasture area. Further differences exist in the more complex management of the pastures (in some cases supplementary sowing of forage grasses, well construction, man-made pasture changes, fences, etc.). In addition, stationary livestock farming often only uses one species or breed of animal, while mobile systems are based on two or more species. Seasonally used stables are rarely available in both forms.

Another - essential - difference is the market economy orientation of the ranches: Subsistence production for their own needs - as is often the case with nomadic animal husbandry  - only rarely occurs as an additional benefit (example: complex transhumance in central Utah or southern Idaho ) . 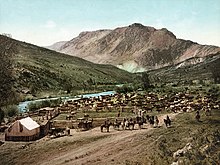 Roundup 1898 on the Cimarron River

Ranching was developed by European settlers in the arid regions of America and Australia and transferred from there to other parts of the world (for example South Africa). The roots are probably in the dry summer of Iberia, where in the course of the Reconquista, deserted, semi-arid spaces were used by large herds of merino sheep and cattle under the supervision of mounted shepherds. With the Spanish-Portuguese conquest in the 16th century, this agricultural system found its way into the deserted grasslands of America: the Pampas, the Gran Chaco, the Sertãos of Brazil, the Llanos of Venezuela, the arid regions of northern Mexico, Texas and California. The fencing of huge areas with barbed wire , which was carried out in this context , was specifically promoted in the late 19th century in order to protect the herds from predators and to be able to better manage them, but also to protect the ranchers' claims to property against natives ( e.g. prairie Indians in the USA) , San in South West Africa or Aboriginal in Australia) and enforce. By the beginning of the 20th century, the focus on the world market increased, but then decreased again: In South America in favor of supplying the rapidly growing cities in the individual states and in the industrialized countries, above all through the political protection of national agriculture from foreign agriculture Competition ( agricultural protectionism ). 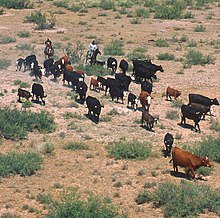 Roundup on a modern ranch in New Mexico

Traditionally, ranches are family owned. Today, however, there are also corporations , cooperatives and wholly or semi-public companies. In relation to the enormously large areas, the livestock stock, the use of labor and capital and the operating income per unit area are extremely low. On the other hand, setting up a ranch requires a high capital investment. The productivity of the soil is extremely low, but labor productivity is high contrast. Modern ranches manage their herds by computer (steering of animals through virtual electric fences , tracking of chipped animals by GPS, etc.). The trend is towards ever larger and more automated systems with fewer and fewer shepherds.

Modern stationary grazing systems in arid areas require a precise calculation of the grazing capacity based on the load (= number of grazing animals per unit of area within the annual grazing time) and the livestock density (= number of simultaneous grazing animals per unit of area, generally based on one day) in order to avoid grazing damage to prevent, for example, as they were created between 1880 and 1940 in the Great Plains by overly large herds. Criteria for an ecologically and economically sustainable management are the maintenance of the productivity and the forage quality of the pastures and the preservation of the functions of the pasture areas for the erosion protection and landscape water balance. In some cases, pasture is improved by sowing suitable forage grasses; Pesticides or other chemicals are usually not used. Modern methods of animal breeding and care (including artificial insemination, veterinary care) are common. Stables are the big exception and the water supply is mostly ensured through access to natural waters or, more rarely, through wells.

The largely natural areas of modern ranches are now mostly divided into various spacious paddocks fenced with barbed wire , which allow for regulated pasture activity and sensible division of the herds. Between the activities, the animals are largely left to themselves, i. H. Interventions by the rancher or the shepherd are kept to a minimum. Free grazing is becoming increasingly rare and will probably only exist in regions close to the mountains, in which, at times, seasonal migrant grazing is carried out. 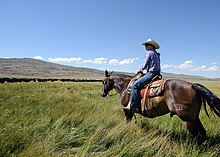 Even today, the horse is an indispensable workhorse in ranching

The cattle are in many countries by branding , marking them to assign ownership of a certain ranch, the cattle in the vast areas provided mixed, if fences are missing or damaged. Even today, the herds are mostly rounded up with the help of specially trained horses - such as Quarter Horses , Paint Horses , Appaloosas or Criollos (South America), Australian Stock Horse - to brand the young animals and later to sell the animals ready for slaughter. Long cattle hauls take place very rarely, as they are usually transported away by truck.

To protect against ecological and economic problems, Rancho Humo in Costa Rica has combined its livestock farming with a large-scale nature conservation project that is marketed to tourists.

Due to the ecological framework, a high degree of specialization is required, which only allows limited possibilities for changing the product range (animal species, races) and correspondingly slow market adjustments. In connection with incalculable losses and costs due to the weather (drought-related lack of fodder, storm damage, etc.) or livestock epidemics as well as frequently fluctuating market prices, ranching is subject to a high economic risk. Similar to the mobile animal husbandry of the former shepherd nomads of the African-Eurasian dry belt, the herd owners sometimes try to counter such acute problems with an intensification of production. An increase in grazing pressure can, however, lead to soil compaction and sealing , damage from overgrazing and the spread of non-forage plants on eroded areas: In the worst case, further pasture use of the areas will be impossible for years or (if desertification occurs ) even finally. Wildlife management with native, adapted species (such as bison in North America or guanacos in South America) are a less problematic alternative; at least in terms of ecological risks.

Another problem is the constant competition with arable farming: modern breeding methods, genetic manipulation and chemical technologies now enable cultivation in dry or cold areas that were previously unsuitable for this. Regardless of the fact that arable farming often leads to even greater ecological problems, ranching is increasingly being displaced into increasingly drier areas, which in turn can tolerate even less livestock.

The special framework conditions require creative ideas from the ranchers in order to survive sustainably. A positive example is the "Rancho Humo" in Costa Rica: The owners have rededicated large parts of their ranch to a nature reserve of over 10 km² (bird protection in wetlands and tropical dry forests). The benefit for the ranchers lies in the tourist marketing.

In the counterpart in fishing , the so-called sea ​​ranching , the fry, which are initially bred in large aquariums, are released in open waters such as ponds or lakes and caught again when they are ready for slaughter.