This article describes the farm. For other meanings, see The Farm .

View of the courtyard of a modern, technical farm with stables in Lower Saxony

Under a farm is defined as a small-scale farming , often agricultural and forestry operations , respectively, the farmyard with residential and farm buildings of this plant as a classic form of settlement ( farmstead ).

The typical farm is a family business in which the members of the owner family mainly carry out the practical activities. But there are also other forms of management.

Pigsties in the district of Cloppenburg

As a farm or Grange , were and are usually referred to large assets in which the practical work mostly by farm workers is carried out while a landowner or manager ( Meier ) is mainly active as an entrepreneur, that in contrast to the usual peasant family . The owners can come from the rural upper class ( landed gentry , such as the manor ) or townspeople, or belong to institutions such as the state and church institutions. The antiquated form of the Fronhof is similar . Many former goods that have not disintegrated now belong to larger companies or are cooperatives , e.g. B. in East Germany as the successor to LPG . In countries with existing nobility, such as England, manors in the classic sense are often still family-owned. 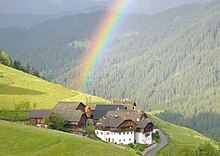 Mountain farmers are farmers in high mountains such as the Alps, Carpathians or high low mountain ranges. The adaptation to the always difficult but regionally different conditions can be done in specialization, e.g. B. insist on livestock farming, but also in complex landscaping (terrace fields). The alpine pastures are typical for livestock farming in the high mountains , but unlike farms, they are only managed and inhabited for part of the year.

In its original English language, the word farm describes any agricultural operation. In the German-speaking area, only individual animal breeding operations are referred to as farms, which differ significantly from the classic structures of a farm; in the case of industrially oriented plants, one speaks only of animal husbandry or agricultural operations. Market-oriented farms outside Europe are mostly called farms in German, regardless of size and ownership structure. Large farms with extensive ranching are known as ranches in many English-speaking countries .

To distinguish it from peasant agriculture , farms in industrial agriculture are referred to - sometimes polemically - as agricultural factories or plantations. Plantations ('planting') are originally operations in tropical areas that grow and harvest permanent plants.

The term usually has a negative connotation and contains criticism of allegedly inappropriate mass animal husbandry and the management of large areas with monocultures , for example for large fruit-growing companies . In particular, the size of animal stalls, for example in pig or poultry production , is viewed critically. 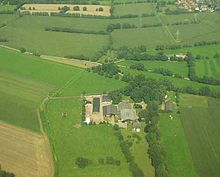 Structurally preserved farms that are no longer agricultural operations and that no longer include fields or pastures are referred to as residual farms .

While the peasants of former times worked mainly for self-sufficiency and also clothes and other utensils made ourselves as possible, so-called subsistence economy , with the market orientation and a specialization occurred. Early forms of specialization were primarily geographical, such as viticulture and dairy farming ( dairy ). Extreme forms are the poultry farm , which no longer cultivates any open spaces, and the riding stables , a sports facility without food production.

The need for low-pollutant, organically produced foods counteracts the trend towards specialization somewhat, since biodynamic production methods include using waste from animal husbandry for plant production and vice versa. Farms with several branches of production are also particularly attractive for another source of income, tourism. Those who want to go on a “ farm holiday ” are more likely to be looking for an ambience that corresponds to their idealized image of agriculture.

The number of farms in Germany has been falling for decades. While there were a total of 288,633 farms in 2007, there were 2010 only 271 783 farms (farm size from 5 ha LF ). The area cultivated per farm increased from 58.0 to 61.3 hectares. More than half of the German agricultural area is cultivated by large farms with a size of more than 100 hectares.

The main building is the farmhouse.

Farmhouses are a compromise between the most diverse requirements for a building . In addition to a residential wing, which often has to last for more than two generations , the house is widely used as a stable , warehouse , workshop or shed ("shelter" for agricultural equipment). Depending on the type of investment, the farm instead includes other residential and farm buildings, stables, warehouses, barns , sheds, gardens, fountains , storage areas and more. When goods are awarded, independent, small localities quickly emerge. For the storage or temporary storage of animal feed and the like, silos are increasingly used. More recently, biogas plants have been installed increasingly .

The single- roof courtyard (often also the single- ridge courtyard ) essentially consists of a building with a continuous ridge line, the single house . Construction and room layout can be very different:

Spain: four-storey single-roof courtyard in Casas Bajas on the upper Turia near Teruel , but to the province of Valencia

In the case of a Paarhof , in contrast to the Einhof , the residential building and farm building are two separate buildings. This construction is particularly suitable for slopes where there is no space for sweeping courtyards. In order to keep the distances short, the buildings are as close together as possible. Typically, the complex consists of two two-storey buildings that are as similar in appearance as possible, arranged in parallel, one of which houses living rooms and storage rooms, the other a stable and barn. Depending on the terrain, the two buildings can also be arranged one behind the other or at right angles to one another.

The Paarhof is spread from Vorarlberg to the eastern edge of the Alps. In the West, the courts usually have a flat Legschindeldach on the east a steeper nail shingle roof .

At the Frankenhof , too , in contrast to the Lower Saxon construction method, the apartment and animal stables were housed separately in opposite buildings.

A larger number of buildings grouped around a rectangular courtyard results in a three-sided courtyard or a four-sided courtyard . However, multi-sided courtyards do not rule out that z. B. Apartment and stable are under one roof ( residential stable house ).

In local locations, buildings on neighboring farms are not always strictly separated. In Upper Valais, for example, there are traditionally barns that have two separate entrances and a partition wall under the ridge. Each half of the barn is used by a different farmer. In individual Lower Saxon villages (actually Einhaus area), a barn district was created in the 18th century for fire protection reasons on the outskirts, in which every farmer had a barn.

If the various courtyard buildings are arranged irregularly, one speaks of a heap courtyard. This is considered to be the most primitive form of courtyard. An extreme form of the heap yard is the Musha (that's the name in Shona , the national language of Zimbabwe ) of some Bantu peoples, here even the living space is distributed over different buildings, separate huts as bedrooms for different generations and the kitchen hut.

Deviations from the scheme

For special purposes, outbuildings were also preferred for one-roof courtyards (e.g. pigsty). Even stronger transitions resulted from need as well as from prosperity. After a war with Austria, Engadin farmers built houses, barns and stables one after the other, and it took years to connect these buildings with wall connections and a new, shared roof. After the devastation of World War II, Polish farmers first built a farm building with a makeshift kitchen-cum-living room, and later a spacious house on the street side of the courtyard. Wealthy farmers in one- house areas built additional barns and, since the 19th century, tool sheds.

Traditional court forms outside of Europe