The title of this article is ambiguous. Further meanings are listed under barn (disambiguation) . 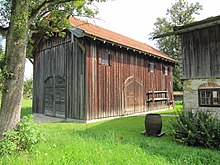 Storage buildings in use are referred to as barn (Upper German also Scheuer , Stadel , Schupfen , Swiss German Schüür , Upper Swabian Schuir , Schopf , Gade ) . It also serves as a storage room for a wide range of operating resources (e.g. agricultural equipment ) and as a roofed workspace for upstream and downstream processing steps in the agricultural production process (preparation of goods, vehicle repair and maintenance).

According to the structural design as well as the geographical arrangement, three basic types can be distinguished.

Typing and linguistic derivation of the names

The word commonly used in German is barn . Etymologically, the name - like Scheuer - derives from the Old High German scuginna for ' shed , shelter '.

Another common regional name for the barn, especially in southern Germany , Austria and Switzerland, is Stadel or Stadl .

According to the basic meaning, the word Schupfen lives on in the Upper German- speaking area .

The Schober always referred to the storage pile in fields and meadows ( Diemen ). In the course of history, this term was also used to include small agricultural buildings.

In the English-speaking cultural area, barns, as well as stable buildings , are called barn . In addition, in the course of history, German-speaking settlers in Pennsylvania have even developed an independent type of barn called a Dutch barn . This in turn should be distinguished from the barn types of the same name in New Jersey, which were introduced by Dutch settlers.

Components and forms of use

Barns are primarily used for weatherproof storage of agricultural resources and secure storage of the raw products from the original production. The barn is also used as a weatherproof place of work, for example for the further processing of the preparation as well as the typical packaging. The usual maintenance processes, such as repair and maintenance of typical equipment, are also carried out in barns.

How these parts are arranged to each other and to the other basic elements of the farm ( living rooms , various stables , other storage and work spaces) is very diverse and depends on regional customs of work processes, on the farming methods and the range of cultivated products and livestock landscape and often the size of the property. This gives rise to the numerous basic and local types of courtyard forms :

Field barn and hay barn far away from the farm are found where harvest logistics require intermediate storage before onward transport (e.g. in landscapes of widely distributed corridors or unsafe local climates). Above all, they are a defining landscape element in some grassland-dominated landscape areas and serve, among other things, to accommodate the mowed hay or straw in a weatherproof storage room away from the courtyard property. Often the harvest was only finally brought in in winter, when it is easier to transport with sleds than with wagons.

In addition to the arrangement of barns as individual buildings on individual parcels, there are also barn districts . These are areas in which barns were built in a physiognomically connected corridor away from the villages. In the past, this was done because of the imminent danger that possible fires could affect neighboring residential areas or towns. 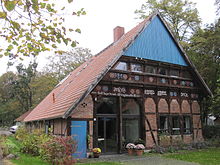 Barns can be determined in more detail according to their function and construction according to certain criteria. As farm buildings, for example, they can be separated from the stable , which is more solid to protect the cattle. As far as the building materials are concerned, the barns are usually more simply built than the other courtyard buildings . In this area, for example, it is characteristic that the subsurface of a level hall floor often only consisted of tamped clay in the past . In most cases, large building gates were created to give vehicles the opportunity to pass through the barn in the facility operation. The latter property has been preserved to this day and is almost imperative due to the high level of mechanization with partly large-format agricultural machinery . In older buildings, these barn doors are usually designed with two leaves or as sliding doors. Nowadays, due to the interior design and functionality, roller gates are mainly used, which can be opened and closed in vertical guide rails. The gates are used in the opposite outer walls, regardless of the roof arrangement (gable or eaves side), to ensure that the machines can drive through. In this case, it is referred to as a drive-through barn. This is mostly not done on a hillside. A level access to the upper barn floor is possible here. In some regions, the barns could also be driven across and a ramp was built on one gable side , on which the second level could also be accessed.

Some also have attics in barns. This applies in particular to combined farm buildings in which a stable building is integrated into the barn parallel to the barn passage along the entire length of the barn.