The title of this article is ambiguous. Further meanings are listed under Arkansas (disambiguation) .

Arkansas  [ ˈɑɹkənsɔː ] is one of the southern states of the United States of America with 2,966,369 inhabitants (2014). The nicknames Arkansas' are The Natural State (German: "The state in the natural state") and Land of Opportunity ("Land of Opportunities"). The capital is Little Rock . The name Arkansas comes from the French pronunciation of a Quapaw word , which means "land of people living downstream". The debate was officially established in 1881 by a decision of the federal state - based on the pronunciation of French and Italian immigrants.

The Mississippi River formed over time the eastern border of Arkansas, while between Clay County and Greene County of St. Francis River marked the western areas. In many places, the Mississippi now meanders away from its original river bed .

Arkansas is characterized by mountains, dense forests and fertile plains. The northwest is part of the Ozark Plateau as well as the Boston Mountains ; in the south belong the Ouachita Mountains , which are separated by the Arkansas River . The southern and eastern areas of Arkansas are known as the Lowlands. All of the mountains there belong to the US Interior Highlands region - the only larger mountain region between the Rocky Mountains in the west and the Appalachians in the east of the United States.

The so-called Lowlands are also known by the name of their regions: Grand Prairie and Mississippi Embayment (see Lower Mississippi Delta Region ). The Arkansas River Delta is a flat landscape that was also shaped by the nearby Mississippi. Both regions mentioned are fertile agricultural landscapes.

The delta region is divided by an unusual geological structure, the Crowley's Ridge . A narrow band of small hills between 65 and 170 m high divides the plain. These hills were probably originally an island between the Mississippi and the Ohio River .

Arkansas has a large number of natural caves, such as B. Blanchard Springs Caverns , and near Murfreesboro has the only natural occurrence of diamonds in the United States. The highest point is Mount Magazine in the north of the state at 839 meters.

The Hot Springs National Park and the Blanchard Springs Caverns, a stalactite cave of national importance, are worth seeing .

Arkansas's eastern border is the Mississippi River, which separates Arkansas from Tennessee and Mississippi . Arkansas is bordered by Louisiana to the south, Texas and Oklahoma to the west, and Missouri to the north .

The US state Arkansas is divided into 75 counties (districts). 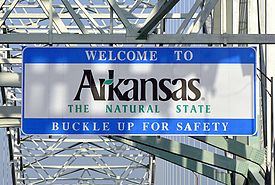 Border sign on the Hernando de Soto Bridge near Memphis

Arkansas is characterized by a humid, temperate subtropical climate that is bordered by the humid continental climate of the northern highlands. Even if the state does not directly border the Gulf of Mexico , it is still within its climatic sphere of influence. In general, the climate is determined by very hot and humid summers and dry and mild winters. In Little Rock , for example, the average summer temperatures are around 32 ° C and those of winter around 10 ° C. The annual rainfall is between 1000 and 1500 millimeters with local variations, although it is somewhat drier in the south than in the north. Snowfalls are quite common, but not very productive at an average of 13 centimeters.

Despite its subtropical climate, Arkansas is known for its sometimes extreme weather. Located between the Great Plains and the Gulf of Mexico, up to sixty thunderstorms are recorded each year. As part of Tornado Alley , tornadoes also occur in Arkansas. Some of the strongest tornadoes have also hit the national territory. Arkansas is far enough from the coast to avoid the direct effects of the Atlantic hurricanes . On the other hand, the heavy rains of a hurricane system and smaller tornadoes occur more frequently . 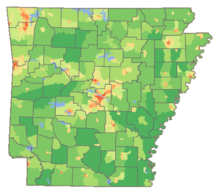 The age structure of Arkansas is made up as follows: 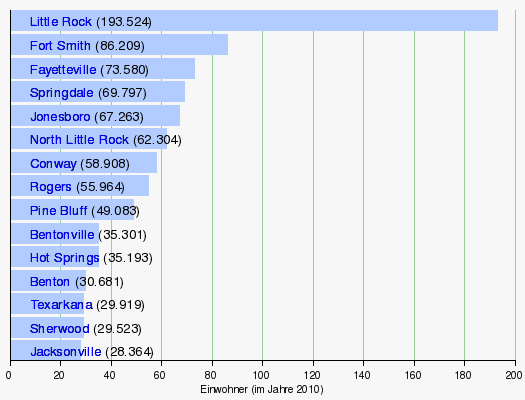 Before European conquerors arrived in what is now Arkansas, the Quapaw-, ruled Caddo and Osage - Indians across the country. The first European conquerors were the Spaniard Hernando de Soto (1541) and the French Louis Joliet (1673) and Robert Cavelier de La Salle (1682). The first French settlement was established at Arkansas Post in 1686 . Arkansas was part of the French colony of Louisiana in the 18th century. In 1762 France ceded the territory to Spain, but received it back in 1800. 1803 Arkansas came as part of the Louisiana -Landkaufs ( Louisiana Purchase ) to the US and was June 15, 1836 the 25th state.

As a result of the displacement of the Indians , Arkansas experienced an economic boom in the 1830s . This was also promoted by the debt-financed expansion of the transport routes. In 1840, Arkansas's national debt had risen significantly. Arkansas declared state bankruptcy in the wake of the economic crisis of 1837 1840 and only partially serviced its government bonds .

Arkansas separated from the Union on May 6, 1861 in the Civil War . Citizens of Arkansas participated in major battles of the war on the Confederate side , with the Union occupying the capital Little Rock as early as 1863 and holding it until the end of the war in 1865. After the Civil War, Arkansas became a US state again in 1868. In the summer of 1919, African American lynch attacks took place, killing five whites and between 100 and 200 blacks.

Notable race riots broke out in Little Rock in 1957 and 1958 when nine African American students who became known as the Little Rock Nine demanded their basic right to attend Little Rock's Central High School . In 1967 Arkansas was one of the last US states to be forced by the Supreme Court to change the prohibition on mixed marriage . In 1968 the US Supreme Court overturned an Arkansas law that made the teaching of evolution illegal. In 1981, an Arkansas court had to annul a law that ordered the pseudoscience, intelligent design, and evolutionary theory to be given an equal share of time in biology classes in Arkansas state schools. In 1978, at the age of 32 , Bill Clinton was elected the youngest governor of Arkansas, and in 1992 he was elected the first Arkansas President of the United States.

The name Arkansas was pronounced in many different ways, the most common being / ˈɑrkənsɔː / and /ærˈkæn.zəs/. In 1881 the two chambers of the Arkansas General Assembly passed a resolution (Arkansas Statutes, Title 1, Chapter 4, Section 105) and specified the first variant as the "only correct pronunciation of the state name" as the State Historical Society and the Eclectic Society of Little Rock agreed that this pronunciation was handed down from the early immigrants.

Seat of the state government: the Arkansas State Capitol

In the early 20th century, rigid mandate time limits were introduced in the two houses of the Arkansas General Assembly ( House of Representatives and Senate ), which favored the governor's strong position in the state.

Arkansas only played a subordinate role in the USA in the 20th century because of its little industrial structure. The Democrats continued in the 1870s by a far-reaching decentralization of public tasks, which the development of the state has up to the present inhibited. Arkansas is also one of the poorest states. Only West Virginia and Mississippi have worse numbers. Only in 1992 Arkansas came into the public eye when the hitherto relatively unknown Governor Bill Clinton nominated surprisingly for Democratic candidates for the presidency and later the 42nd President of the United States was after the election against the Republican incumbent George Bush won would have.

Although the southern state is not characterized by a metropolis like New Orleans , the greater Little Rock area and the Indian territories in the northwest of the state are powerful centers for the Democrats. It is thanks to them that the Democrats were able to hold onto their previous supremacy here longer than in other southern states. Republicans have gained significant ground since the 1990s, especially because their low-tax policy and social conservatism hit the nerve of many residents and they were strongest in the fastest-growing areas like the northwestern suburbs of Little Rock. Popular longtime Republican Governor Mike Huckabee continued the policies of his Democratic predecessors with heavy state investments in infrastructure, social spending, and business development. He ran several times as a presidential candidate in his party's primary . Since the 2010 elections , the Democrats have also suffered significant losses in state-wide elections. US Senator Blanche Lincoln lost her seat in 2010 to Republican John Boozman ; her Senate and party colleague Mark Pryor lost his mandate to Republican Tom Cotton in 2014 . In 2012, for the first time since the Reconstruction , Republicans regained a majority in the state's House of Representatives. In the United States House of Representatives , the four are congressional districts of the state since the 112th Congress represented by four Republicans; in the 111th Congress there were three Democrats and one Republican.

In Arkansas, there is a National Park , the Hot Springs National Park . In total, the National Park Service for Arkansas has seven protected properties (see list below) and five National Natural Landmarks (as of September 30, 2017). There are a total of 52 state parks in Arkansas .

Other protections in Arkansas in the form of National Historic Sites , National Military Parks, and National Rivers include:

In addition as a National Historic Trail of the Trail of Tears (English. "Trail of Tears"), which leads not only to Arkansas by eight other states.

The Old State House is one of 17 National Historic Landmarks in Arkansas.

The NPS has 17 National Historic Landmarks and 2,657 entries in the National Register of Historic Places for Arkansas (as of September 30, 2017).

The most important branch of the economy is agriculture:

List of state, US, and interstate highways in Arkansas

Amtrak's Texas Eagle makes multiple stops in Arkansas each day on its journey from Chicago to San Antonio .

Counties in the US state of Arkansas