The title of this article is ambiguous. For the Danish feature film, see Reconstruction (film) , for the German term see reconstruction .

As Reconstruction is known in the United States by the American Civil War until 1877-long (1861-1865) phase in which the 1860/61 beaten from the US Southern states were reintegrated into the Union. The term reconstruction means that it was not about a mere restoration of the original state, but also about the reconstruction after the destruction of the war and the state reorganization of the former confederate states , in which slavery was now abolished. 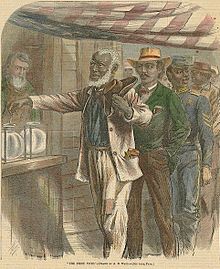 Among other things, the Reconstruction ensured the liberation of the slaves so that African Americans had the right to vote for the first time in 1867

The leaders in the north agreed that ending the war meant more than just ending the fighting. It had to encompass the two war goals: Confederate nationalism had to be completely pushed back and all forms of slavery had to be eliminated. The way to get there was, however, heavily disputed. The questions of the intensity of the Union's oversight to which the South should be subject and the processes by which the southern states were to be reintegrated into the Union polarized northern society.

Reconstruction began at an early stage of the civil war and formally ended in 1877. US President Abraham Lincoln had already declared on December 8, 1863 an amnesty and reconstruction for the areas occupied by the US Army . Lincoln's plans for Reconstruction were mildly shaped towards his former adversary. The radical republicans like Thaddeus Stevens , Charles Sumner , Benjamin Wade , Henry Winter Davis and Benjamin Franklin Butler wanted to keep the south out of the Union for as long as possible and exploit it particularly economically.

After the war ended, the US faced three fundamental problems:

There were three possible solutions:

On March 3, 1865, Congress passed a law establishing the Freedmen's Bureau. This office was subordinate to the War Ministry and was to be responsible for abandoned lands and for all affairs of refugees and freed slaves from the Confederate states, but also from other areas affected by the war, until one year after the end of the war. The Minister of War was instructed to provide the Department for immediate and temporary aid with as much food, clothing and fuel as he considered necessary. The head of the department was also given the authority to give land that was abandoned or owned by the state to male refugees or freed slaves who could acquire them over a three-year period. In the course of the following years the budget and the staff of the department were continuously reduced. It was finally dissolved in 1872 under pressure from white MPs from the former southern states.

Johnson's plan, who had become president after Abraham Lincoln's assassination in April 1865, was viewed by radical Republicans as too compliant and led to bitter political power struggles.

Reconstruction also included taking an oath, which, according to the radicals' demands, should contain the passage that the oath had never supported the Confederation or served in its armed forces in the past ( ironclad oath ). This would mean that the entire upper class of the South would have been denied access to any office in the Union. The moderates prevailed and the southerners had to swear that they would stand by the Union in the future.

The three “civil war” constitutional amendments (sometimes called reconstruction amendments ) had the longest lasting effect . The 13th Amendment abolished slavery, the 14th extended protection of citizens to all races, and the 15th abolished racial restrictions in elections. The Republicans obtained an absolute majority in the 1866 congressional elections , mainly because the southern states were not allowed to vote. The Congress in the years adopted several Reconstruction Acts , against which President Johnson each vetoed. The aim of these laws was primarily to force the southern states to recognize the amendments to the constitution. The differences between President Johnson and radical Republicans ultimately led to the first impeachment process in US history, which Johnson survived in the decisive votes in the Senate with the closest possible outcome.

On March 7, 1867, Congress passed the Southern Reconstruction Act against the President's veto. The aim of the law was to replace members of the southern governments with supporters of the northern states and to preserve the rights of liberated blacks. The existing southern governments were ousted and replaced by military governors. No one who had supported the former Confederate or state government was allowed to vote or hold political office.

Between 1868 and 1870 the Ku Klux Klan , founded in May 1866 in Pulaski , Tennessee , by former Confederate members, played an important role in restoring white rule in North Carolina, Tennessee, and Georgia.

The southern states, with the exception of Tennessee, which had already returned to the Union, were divided into five military areas under the command of a military governor and administered. Prior to their appointment, Johnson had consulted with General Ulysses S. Grant . The military administrative districts were:

The military governors had absolute power. They removed from the administration thousands of officials who had already served their states during the secession. Under the strict supervision of the army, the states worked out new constitutions and elected new parliaments, and the army put down unrest.

The Southern Democrats decided in 1870 that if they were to survive and regain influence, there was no other way for the Southern States than reconstruction.

Reconstruction ended at different times in the various states, in the last three (Florida, South Carolina and Louisiana) through the "Compromise of 1877". In it, the southern states agreed to the controversial presidency of Rutherford B. Hayes due to an unclear election result if all US troops were to leave these states at the same time.

The states that had left the Union rejoined the Union one after the other after meeting the requirements.