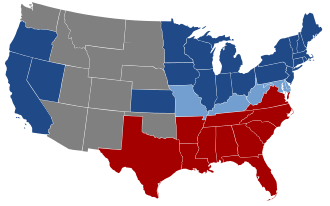 With Northern states (more rarely Union countries ), those states are the United States called that continue pleaded 1860/1861 to the United States when eleven Southern states had split off and the Confederate States of America founded. Indecisive or neutral states like Maryland or Kentucky have been pressured by both parties to join one side or the other.

After Confederate troops marched into Maryland, Maryland joined the Northern States in the interests of self-defense, despite sympathizing with the South in many ways, but breaking away from the Union was out of the question for Maryland.

The term “northern states” is, however, partly controversial and can also be seen as a cultural area . The “Southern States” cultural area then includes Maryland and Delaware , with some reservations also Kentucky and West Virginia (which split off precisely because of this). California, for example, due to its location in the western United States, cannot geographically be considered the “northern state of the USA”. Politically, however, it was on the side of the Union during the civil war.

The northern states saw themselves in the legitimation and in the continuity of the previously existing political unit as the union that continued to exist through them, so that union also became a synonymous term for the northern states among their supporters and the hostile Confederates.

The division into northern and southern states has persisted to this day and establishes a socio-cultural contradiction that runs through all social classes and parties and, since the reconstruction phase, has implicitly polarized all politics between the individual states and the federal government. Only in the western United States, which hardly played a role in the American Civil War , is this classification not applicable.

The Mason-Dixon Line , named after the astronomer Charles Mason and the surveyor Jeremiah Dixon , traditionally forms the border between the northern and southern states in common parlance, although a state of the northern states ( Maryland ) and even the District of Columbia including the city of Washington south of this line.