This article deals with the state of the United States. For additional meanings, see Delaware (disambiguation) .

Delaware  [ ˈdɛləwɛɹ ] is a state on the east coast of the United States of America . Rivers and forests shape the landscape, the headquarters of large international companies shape the economic picture of the second smallest state in the USA. The latter result from the particularly favorable taxation of holding companies and are in part pure mailbox addresses . The state bears the official nickname of The First State (first state) , since 1787 Delaware became the first state of the Thirteen Colonies to the US Constitution ratified. There are only three counties in Delaware, fewer than in any other US state.

The state has a total area of ​​6,447 km², 1,387 km² of which is water. This makes Delaware the second smallest US state in terms of area after Rhode Island . The majority of the area of ​​Delaware lies on the Atlantic coastal plain . The state borders Pennsylvania to the north . The eastern border with New Jersey is formed by the Delaware River and the Atlantic Ocean; to the west and south is the state of Maryland . The largest city is Wilmington and the capital is Dover . One of the largest American air force bases, Dover Air Force Base , is located near Dover.

Delaware has a moderate year-round climate with average temperatures ranging from 0 to 24 ° C and statistically 208 days of sunshine. The seasons are clearly demarcated from each other, but the climate is influenced by the Atlantic and is temperate to humid all year round. In summer it can get up to 32 ° C; Snow sometimes falls in winter - temperatures can drop to -5 ° C. 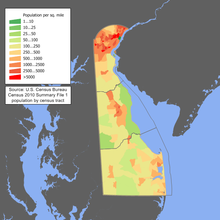 The age structure of Delaware is composed as follows:

The Lenni Lenape are an Indian minority, also known by Europeans as the Delawars . They were very influential during the formation of the United States.

The first black church in the United States was founded in Delaware by the former slave Peter Spencer in 1813 as the " Union Church of Africans ". According to a study, the current distribution of religious communities is as follows:

Wilmington is the largest city in Delaware

Before European settlement, Lenape (also known as Lenni Lenape ), Susquehanna, and other tribes lived in the area.

The Spanish and Portuguese came to the coast of what is now Delaware in the 16th century. But later explorers - such as Henry Hudson , for example , who drove as far as the Delaware River in 1609 - reached the coasts without any evidence of landing there.

The first European settlers came to the area in 1631, organized as a trading company under the leadership of Captain David Pietersen de Vries . They established a Dutch trading post called "Zwaanendael" (or "Swaanendael", today's Lewes ). In 1632 Captain de Vries returned and found that in the meantime all the settlers had been killed by Indians and the settlement had been burned down.

In March 1638 a Swedish expedition consisting of the ships Kalmar Nyckel (Key of Kalmar) and Fågel Grip (Bird Griffin), led by Peter Minuit, reached the coast of what is now Delaware. The settlers, who landed around March 29th, built Fort Christina (named after the then Swedish Queen Christina I ). Fort Christina, now Wilmington , became the first permanent European settlement in Delaware.

The main Swedish governor was believed to be Colonel Johan Printz , who ruled the colony from 1643 to 1653. Shortly after his arrival in 1654, his successor conquered the Dutch trading base Fort Casimir, which was built in 1651 on the site of the present-day town of New Castle .

When the Swedish colony became a commercial competitor for the Dutch, Petrus Stuyvesant , the governor of the Nieuw Nederland colony , decided to drive the Swedes out and establish the New Amstel colony. In 1655 he reached the coast with his fleet. He defeated the Swedish forces and placed the whole area under his authority.

The Dutch rebuilt the destroyed Fort Casimir. The fort quickly became a central settlement and was soon unable to accommodate everyone. Then the city of Neu-Amstel was built, today's New Castle.

The name "Delaware" comes from the title of the second governor of the colony of Virginia , Sir Thomas West, Lord De La Warr and the Delaware River named after him . In 1664, the English captured the colony and added it to their own colony, New York .

In 1681 King Charles II gave the province of Pennsylvania to William Penn . Penn's agents, who arrived there soon after, reported that the province would no longer have access to the coast if there were hostilities with the colonies on both sides of the Delaware River and the Bay. Penn then submitted a request to the royal family to give him the land on the west side of the Delaware River and the Bay that was below his province. This request was granted in March 1682 by James, the Duke of York (and later James II ). Penn received the land that is now New Castle, St. Jones and Deale Counties.

After his arrival in America, on October 27, 1682 in New Castle, the land was given to Penn by agents of the Duke of York. On this occasion, the colonists of these lands also swore allegiance to Penn.

In 1683 the three "lower counties" were annexed to Pennsylvania according to Penn's famous "Frame of Covernment". At the same time, St. Jones was renamed Kent and Deale was renamed Sussex.

In 1704 the “three smaller districts” got their own parliament and in 1710 their own administrative council.

In 1776, two months after the signing of the Declaration of Independence , the three counties merged to form the State of Delaware and separated completely from Pennsylvania. Delaware renounced itself as one of the thirteen colonies of the British rulers and joined the American independence movement .

The military conflicts during the colonial era had produced well-organized and well-managed militias and the Delaware troops, which numbered 3,000 volunteers at the beginning of the War of Independence, took part in a large number of known battles, with only the Battle of Cooch's Bridge , which took place on September 3, 1777 in near Newark, was fought on the soil of Delaware.

In 1777 Dover became the capital of Delaware in place of New Castle .

On December 7, 1787, Delaware became the first of the 13 colonies to ratify the new American Constitution during a ceremony in Dover .

Although Delaware was a slave-holding state, the state sided with the Northern states during the Civil War after a vote to leave the Union on January 3, 1861 failed to find the required majority. On February 18, 1865, eight months after the end of the Civil War, Delaware refused to approve the 13th Amendment to the United States Constitution . It was not until February 12, 1901, when Delaware approved the abolition of slavery by ratifying the new article . In Delaware you can still visit the first "black" church , which was founded by slaves before the abolition of slavery. In 1967, Delaware was one of the last US states to be forced by the Supreme Court to abandon the prohibition of mixed marriage . 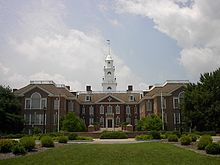 Delaware's fourth constitution , currently in force , was adopted in 1897 and provides legislative, executive and judicial bodies. The legislature consists of a House of Representatives with 41 members and a Senate with 21 members. The head of the executive branch is the governor of Delaware and the judiciary has a hierarchy of courts with the highest court of the state at the top.

The political orientation of Delaware was always difficult to grasp until the presidential election in 2000 , as the state had previously voted most often of all states for the ultimately victorious candidate. But in recent years, the Democrats' lead in the affluent little state that was still classified as a swing state in 2004 has become increasingly evident. Governor John C. Carney is just as Democrat as all three representatives in the 115th Congress : the Senate Chris Coons and Tom Carper and the deputies in the House of Representatives , Lisa Blunt Rochester . In the Electoral College , Delaware has continuously provided three electors since 1789.

Until 2013, Delaware was the only US state that had no national parks, nature reserves, or federal memorials on its territory. On March 25, 2013 , President Barack Obama dedicated the First State National Historical Park as a National Historical Park to commemorate the state's role in colonial times and the ratification of the United States Constitution by Delaware as the first state.

The National Park Service (NPS) has two National Historic Trails for Delaware , both of which run through several states:

The NPS lists 14 National Historic Landmarks and 409 structures and sites in Delaware that are listed on the National Register of Historic Places (as of September 30, 2017).

Delaware has been the most economically successful state in the USA for years. The real gross domestic product per capita GDP - the most important indicator of prosperity - was USD 73,931 in 2016 (national average of the 50 US states: USD 57,118; national ranking: 3).

1 Ranking place based on the USA

There is a fish industry based primarily on crustaceans and mussels , an important chemical industry, as well as food and paper processing companies.

Delaware as a tax haven

The Corporation Trust Center in Wilmington - a one-story building that served as the "headquarters" of over 285,000 companies in 2012, including a large number of the corporations traded on the US stock exchanges that operated mailbox companies here .

The American state of Delaware is known for its mailbox companies , especially in Wilmington , and is considered the US tax haven . According to the US census, the entire state of Delaware has just under one million inhabitants, but a little more than a million companies registered here. The state government is advertising that 65 percent of the companies listed on the Fortune 500 stock market index have their legal seat in Delaware, but usually not their corporate headquarters.

One reason for Delaware's unusual economic strength is that Delaware corporate law is considered to be the most liberal in the country, resulting in almost all of the major US corporations being registered in Delaware. As a result of the Delaware Effect , Delaware is known as the seat of approximately 620,000 mailbox companies, including numerous large corporations. Delaware is widely recognized as a tax haven . According to the tax law group Tax Justice Network , Delaware tops the list of the world's most popular tax havens (comparing laws, case law and inflow of deposits). In addition to extremely low taxes, it is possible to set up businesses anonymously. No share capital is required to set up a company, and a board of one person is sufficient. Further advantages for companies are that board meetings do not have to take place in Delaware and that there is no disclosure requirement.

Over a third of the mailbox companies are located in a single one-story building, the Corporation Trust Center .

Delaware has a well-developed road system, see the list of State, US, and Interstate highways in Delaware .

In 2007 the rail network covered almost 400 kilometers. The largest route network has the Norfolk Southern Railway , which opens up the entire national territory. Other Delaware railroad companies include CSX Transportation , Maryland and Delaware Railroad , Conrail, and Wilmington & Western Railway .

To the north, the high-speed line of the Northeast Corridor crosses the state. Amtrak has a stop for the Acela Express in Wilmington . Another seven trains also stop at this station. In 2008 the number of passengers was 731,539.

Regional traffic is offered on the Philadelphia – Wilmington – Newark route on behalf of SEPTA and the Delaware Transit Corporation.

Counties in the US state of Delaware