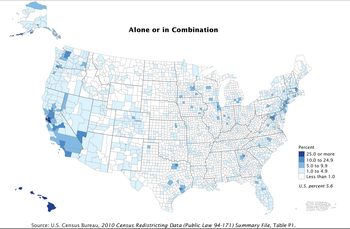 Distribution of the Asian population in 2010

Asian Americans (ger .: Asian Americans ) are residents of the United States , which are either in Asia were born or have Asian ancestry. The term "Asian Americans" was coined in the late 1960s by the historian Yuji Ichioka in order to better identify the members of a new radical political identity of the Asian ethnic groups with similar backgrounds, experiences and goals.

In 2010 there were around 17 million Asian Americans living in the United States. The largest group is made up of the Chinese (3.7 million), followed by the Filipinos (3.4 million) and the Indians ( Desi ) (3.1 million). The majority of them live in big cities. About 50% of Asian Americans live in Hawaii and on the west coast of America.

The past of dealing the United States with Asian Americans is burdened in part: the Chinese Exclusion Act was in 1882 all Chinese workers prohibited immigration. The Gentlemen's Agreement of 1907 made immigration impossible for new Japanese labor migrants. The Immigration Act of 1917 (also known as the Barred Zone Act) also banned the other Asians from immigration. After the Japanese attack on Pearl Harbor in World War II , Americans and immigrants of Japanese origin were interned in camps , some for years .

Asians were only able to immigrate on a large scale again after the racist quota system of the Immigration Act of 1924 was repealed in 1965 .

Asian Americans have the highest life expectancy, the highest median household income, and the lowest crime rate of any ethnic group in the United States.

Distribution of the Asian population