The title of this article is ambiguous. Additional meanings are listed under New Jersey (disambiguation) .

New Jersey ([ njuːdʒɜːzi ] BE /  [ nuːdʒɝzi ] AE , German older also Neujersey ) (after Rhode Iceland , Delaware and Connecticut ) the fourth smallest state of the United States and also the one with the highest population density. New Jersey was named after the Channel Island of Jersey . The state is nicknamed The Garden State and belongs to the Central Atlantic States . 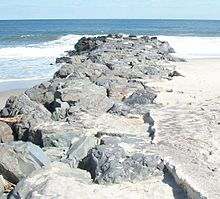 New Jersey has a total area of ​​22,588 km², of which 3,377 km² is accounted for by water. The state borders New York to the north and northeast , where the Hudson River forms a natural boundary. To the west, New Jersey is completely separated from the states of Pennsylvania and Delaware by the Delaware River . In the south, in the Delaware Bay , and in the east, New Jersey has shares of the Atlantic .

The state is roughly the shape of the head and torso of a person whose head is bent slightly forward. Based on this picture, the head, i.e. the north of the country, is the region with the larger elevations in an otherwise flat country. Here in the Great Appalachian Valley (also Kittatinny Valley ), which differs from the US state of Alabama to the Hudson River extends, located on the border of the State New York of High Point , New Jersey's highest mountain, with 550 meters the average Land height by more than seven times.

The east of the country, the catchment area of ​​the Hudson and the largest US metropolis of New York City , is densely populated. The metropolitan area west of the Hudson already includes Newark , Jersey City , Paterson and Elizabeth , all four of the country's major cities.

To the south of it begins the Atlantic coastal plain , which is a popular holiday destination over a length of more than 200 km with its numerous seaside resorts. The coastal strip is relatively heavily populated, especially in the northern and then again in the southern part with its numerous medium-sized towns in a row. The largest cities along the coast are Long Branch in the north and Atlantic City in the south, which is important for tourism .

In the interior to the southern part, dense forests shape the image of the state. Well-known and popular travel destination in this region are the Pine Barrens , which are under conservation and to which the myth of the Jersey Devil is attached. 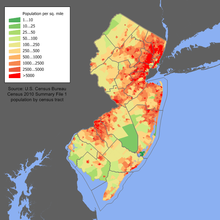 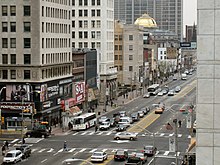 The residents of New Jersey are colloquially called "New Jerseyans" or "New Jerseyites".

In 2005 there were 1.9 million, i.e. H. 19.2% of all residents were born outside of the United States. According to the United States Census Bureau , New Jersey is the second richest state after Maryland .

The age structure of New Jersey is made up as follows:

George Washington crosses the Delaware River during the Revolutionary War.

The area of ​​New Jersey was originally the settlement area of ​​the Lenni Lenape (Munsee) and other, smaller tribes such as the Hackensack, Haverstraw, Navasink, Raritan and Wappinger . Today's New Jersey was then colonized by Europeans from 1609 first in the form of Dutch settlements and formed initially with the modern state of New York , the Dutch colony Neuniederland . The resident Indian tribes had allied themselves after a massacre in Pavonia by Governor Willem Kieft in the Wappinger War (1643-1645) against New Netherlands and its supporters ( Mahican , Mohawk and English settlers). This war was one of the bloodiest and cruelest wars of extermination against the Indians. Together with their allies, the Wappingers had more than 1,600 tribesmen killed. In August 1644, a peace treaty was signed in Fort Orange, in which the defeated Wappinger and Metoac tribes were obliged to pay an annual tribute in the form of wampum to the Mahican. The Mahican and Mohawk suffered no losses of their own, and the Fort Orange Treaty enabled them to control the wampum trade in western Long Islands and the lower Hudson. When the government in the Netherlands learned of Kieft's policy and the massacres, he was finally replaced in 1647 and they appointed Petrus Stuyvesant as his successor . The Nieuw Nederlands years were numbered, however, as the Dutch colony was taken over by England in 1664 without a fight. In honor of the Duke of York, their future king, the British named their new colony New York .

In what is now New Jersey, two proprietary lordships (owned by the Lord Proprietors ) were formed, East Jersey and West Jersey . In 1702 East and West Jersey were united into a crown colony and Edward Hyde, 3rd Earl of Clarendon was appointed first governor of the Province of New Jersey . During the American Revolutionary War , New Jersey was the scene of around 100 battles, including Trenton in 1776, Princeton in 1777 and Monmouth in 1778. As early as 1776, New Jersey's first constitution was passed, which guaranteed all residents above a certain level of ownership the right to vote . This meant that white and black men and widows could vote, but not married women, as they were not allowed to own property. New Jersey signed on July 4, 1776 Richard Stockton , John Witherspoon , Francis Hopkinson , John Hart and Abraham Clark , 1776, the United States Declaration of Independence .

New Jersey was the seat of the first United States government to emerge from the Continental Congress for a short time , Princeton in 1783 and Trenton in 1784 . As one of the 13 original states, New Jersey joined the Union as the third state in 1787. In 1804, New Jersey became the last northern state to gradually abolish slavery . In 1844 the second constitution was ratified; the current constitution of the country dates from 1947. 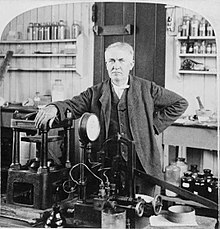 After the Civil War , which largely passed New Jersey by, the Industrial Revolution took hold in the country. Until then, New Jersey was largely rural. However, agriculture was never very productive due to poor soil conditions. Personalities such as Thomas Edison , who worked for Menlo Park for a long time , contributed significantly to the industrial growth. The growth of the up-and-coming metropolises of New York and Philadelphia also had a positive effect on New Jersey from around 1870. Both cities were (and are) located in neighboring states, but both are directly on the state border, so that their economic and demographic growth also radiated to New Jersey. Today, almost half of the New York metropolitan area is in New Jersey, which also means that the most important population center of the country is located there, i.e. in the northeast.

Part of the Frelinghuysen Arboretum in winter

Development towards the supremacy of the Democrats

At the state level, Republican Chris Christie was elected new governor in 2009 and was confirmed in office in 2013 with a clear majority. The main focus of the Democrats are clearly the large industrial cities of Newark and Jersey City in the New York area, as one of their classic target groups, the middle and lower class workers and ethnic minorities, are very strongly represented here. New Jersey has 14 electoral votes in presidential elections.

The state is currently represented in the US Senate by Democrats Bob Menendez and Cory Booker . The latter won the by-election for the mandate of the late Frank Lautenberg against the Republican Steve Lonegan.

The United States House of Representatives has one Republican and eleven Democrats from New Jersey in the 116th Congress .

In December 2007, a democratic majority in both houses of the New Jersey Legislature ( Senate and House of Representatives ) decided to abolish the death penalty .

Members of the 117th Congress

New Jersey is one of the leading industrial nations in the United States. New Jersey's economic output was USD 581 billion in 2016, making it the eighth-highest economic output of any state in the United States and accounting for 3.15% of the total American economy. Counted as a separate country, New Jersey's economic output would be roughly the same as that of Argentina . The real gross domestic product per capita (English per capita real GDP) was 64,970 US dollars in 2016 (national average of the 50 US states: 57,118 US dollars; national ranking: 8th).

Of importance are among others:

Agriculture is highly developed. At the dunes occupied Nehrungsküste tourism is an important economic factor. New Jersey is a research leader in the United States ( Princeton et al.).

Location of the New Jersey Turnpike and Garden State Parkway

New Jersey has a dense network of freeways , interstate highways, and other expressways, some of which are toll roads. As early as the late 1920s, the Route 1 Extension and the Pulaski Skyway, two of the first intersection-free expressways in the United States, were built. The New Jersey Turnpike , which was built at the beginning of the 1950s and is subject to charges, is particularly well-known and has up to 14 regular lanes in some sections.

Newark Liberty International Airport is an international commercial airport in Newark and was the first major airport in the immediate vicinity of New York City.

States , federal district, and suburbs of the United States

Counties in the US state of New Jersey