Statue of William of Orange Rutgers

The Rutgers University , officially The State University of New Jersey , is the largest institution of higher education in the State of New Jersey . The university's main campus is located in the cities of New Brunswick and Piscataway . There are two smaller campuses in Newark and Camden . Rutgers offers more than 100 undergraduate programs, 100 master’s programs, and 80 doctoral programs at 29 graduate schools and colleges, 16 of which offer graduate programs. The Rutgers University is one of the best public universities in the United States , the so-called Public Ivy , and is a member of the Association of American Universities , a since 1900 existing association of leading research-intensive universities of North American. In the 2013/14 academic year, 26 Fulbright scholars went to Rutgers University , which ranks 3rd among Research Universities behind Harvard University and the University of Michigan .

The current university emerged from Queen's College , founded in 1766, making it the eighth oldest higher education institution in the United States. It was originally affiliated with the Dutch Reformed Church , but is no longer religiously oriented today. In 1825 it was given its current name in honor of its patron Henry Rutgers , a hero of the War of Independence . The university's main campus is located in the cities of New Brunswick and Piscataway . In 1946 the Rutgers merged with the University of Newark , now the Newark Campus , and in 1950 with the College of South Jersey and the South Jersey Law School , now the Camden Campus . By administrative acts of 1945 and 1956, Rutgers was declared a State University of New Jersey . 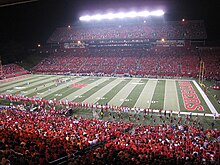 The Scarlet Knights against the Cincinnati Bearcats in front of 43,768 spectators

Rutgers University's sports teams are the Scarlet Knights . The university has been a member of the Big Ten Conference since July 1, 2014.

The Teoma search engine was developed there.