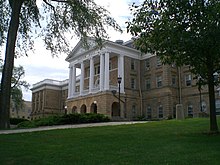 It was founded in 1848 after Wisconsin became the 30th state to join the United States of America. The first 17 students began teaching on February 5, 1849. It has been one of the leading universities in the United States since the beginning of the 20th century. The Daily Cardinal was founded on April 4, 1892, as today's oldest student newspaper . In 1913, the best-known honorary society for graduates in economics, Beta Gamma Sigma, was founded here. In August 1970, assassins set off a car bomb because they wanted to protest against the university's cooperation with the US military. One researcher, Robert Fassnacht, was killed. Three employees were injured.

The university is located in Madison , near the Capitol on the south shore of Lake Mendota . The main campus covers an area of ​​3.8 km². The entire university campus including all research facilities is 43 km² in size. The university has its own police force and hospital.

As the most significant entity in the Wisconsin university system, it is ranked 13th for the best public education institutions in the United States and 45th for the best American universities. In the 2012 Shanghai ranking , it was in 19th place globally.

The UW – Madison sports teams are known as the Wisconsin Badgers . The college is a member of the Big Ten Conference , in the NCAA . The sports that are practiced include American football , ice hockey , wrestling, volleyball and soccer , in which the Badgers are also very successful. The Badgers own several sports venues such as Camp Randall Stadium , built in 1917 , which can hold more than 80,000 spectators. The ice hockey men and the basketball women and men are based in the Kohl Center .

The team colors are red and white. The mascot is a badger ( English Badger ) named "Buckingham U. Badger".

The UW-Madison claims patent rights for the sweetener Brazzein as its own invention, although in Central Africa the fruits of the Pentadiplandra brazzeana , from which Pentadin was isolated, have been known for a long time . The university denies any connection with the natural occurrences in Gabon . It holds three patents on compounds that are isolated from Pentadiplandra brazzeana and on its industrial production (US Pat. No. 5,326,580, US Pat. No. 5,346,998, US Pat. No. 5,527,555). In this context, the patenting of Brazzein is classified as biopiracy by GRAIN and Greenpeace .

In 2012, the animal rights organization PETA published allegations that the biological faculty carried out experiments on the hearing of cats that were cruel to animals. To obtain information about the localization of sound perception in the animals' brains , these probes were implanted in the auditory cortex , the ears and parts of the brain were surgically processed, and feeding was suspended for a few days to increase stimulus perception.