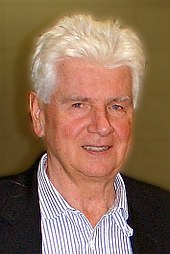 In 1999 he received the Nobel Prize for Medicine “for the discovery of the signals built into proteins that control their transport and localization in the cell”. Blobel's main research area was above all the mechanisms of intracellular sorting of proteins and the search for ways to optimally maintain their function.

Günter Blobel's family fled their native Silesia from the advancing Red Army at the end of January 1945 . On the flight to the west, she crossed the still undestroyed Dresden , which made a deep impression on the eight-year-old. Only days later, from a distance of around 30 kilometers, the family witnessed the destruction of the city by the Allied air raids from February 13th to 15th, 1945. The glow of the burning city, which was visible from afar during the night, remained unforgettable in the young Blobel's memory. Shortly before the end of the war, on April 10, 1945, his eldest sister, Ruth, then 19, was killed in a bomb attack on a refugee train near Schwandorf and buried there in a mass grave. The family did not find out about this until months later.

After the war, the return proved to Silesia impossible and Blobel settled in Saxon Freiberg down where Günter Blobel grew up and at the Scholl High School in 1954 High School took off. After studying medicine in Frankfurt am Main , Munich , Kiel , Freiburg im Breisgau and Tübingen , he received his Ph.D. at the University of Wisconsin and then moved to Rockefeller University , New York , where he worked with the future Nobel Prize winner George Emil Palade . In 1987 he was granted US citizenship. In 1992 he was appointed full professor at Rockefeller University.

Blobel discovered that many proteins have a so-called signal sequence that controls their transport and distribution within the body cell after its production (known as protein biosynthesis ). For this discovery he received the 1999 Nobel Prize in Physiology or Medicine . This knowledge can also explain certain hereditary diseases , the mechanism of which is based on an incorrect transport of proteins.

Around 820,000 euros of prize money of the Nobel Prize Blobel has in memory of his murdered in the war elder sister Ruth to rebuild the Frauenkirche donated in Dresden, especially on founded his own foundation " Friends of Dresden ", which is the goal of the reconstruction of the Dresden Frauenkirche has prescribed. He was an honorary member of the Frauenkirche Board of Trustees . As a reaction to the decision to install a new instead of a reconstructed historical organ , he gave back this honorary membership in the so-called organ dispute in 2003.

Blobel was also very committed to the preservation of the Dresden Elbe meadows and the faithful reconstruction of the Neumarkt . He was an honorary member of the Gesellschaft Historischer Neumarkt Dresden eV and member of the board of trustees of the Kulturstiftung Historisches Bürgerhaus Dresden. With funds from the Max Kade Foundation in New York, she reconstructed the historic town house of the court chef August the Strong at 29 Rampische Strasse true to the original. Today the house is used for international student exchanges and offers students from the Carl-Maria v. Weber affordable accommodation.

On Blobel's initiative, UNESCO had an investigation into whether the world cultural heritage of Dresden Elbe Valley is endangered by the construction of the very controversial Waldschlößchenbrücke . After a corresponding report, the Elbe Valley was placed on the “ Red List of World Heritage in Danger ” and in 2009 the title was finally revoked. Blobel also campaigned for a faithful reconstruction of the Leipzig University Church of St. Pauli, which was blown up in 1968 . At the Neumarkt in Dresden, Blobel himself acted as the client on the Frauenstrasse 9c property and had a building built with the historically partially reconstructed facade of the former “Au petit Bazar” department store, which was externally completed in 2018. There were several debates with the Gesellschaft Historischer Neumarkt Dresden (GHND) about the design of the facade .

Since June 19, 2000, Blobel was honorary senator of the Technical University of Dresden , on June 20, 2000 he was granted honorary citizenship of the city of Freiberg and on May 21, 2001 he received an honorary doctorate from the Technical University of Bergakademie Freiberg . A building belonging to the TÜV school in Görlitz has been named after him since May 10, 2004 . That day, Blobel planted an oak in Jänkendorf . Since 2011 a plaque on local granite has been providing information about his childhood in the village in 1945 as well as his further life and work.