He was a long-time professor at the Ludwig Maximilians University in Munich and is considered one of the most important German-speaking behavioral researchers. The focus of his work was the exploration of the honeybees' sensory perceptions and the way these animals communicate with one another. For his achievements, he was honored with the Nobel Prize for Physiology or Medicine in 1973 together with Konrad Lorenz and Nikolaas Tinbergen . The award recognized “her discoveries about the organization and triggering of individual and social behavior patterns”.

Karl von Frisch was a grandson of General Staff Doctor Anton Ritter von Frisch (1811–1886), who was ennobled in 1877 . He was the youngest of four sons of the surgeon and urologist Anton Ritter von Frisch (1849–1917) and his wife Marie von Frisch born. Exner. The three older brothers, including the lawyer Hans von Frisch , also became university professors. After completing his schooling at the Schottengymnasium and graduating from high school in 1905, he first studied medicine, but switched to zoology after five semesters and studied in Munich from 1908 under Richard von Hertwig . In 1909 he returned to Vienna and worked with Hans Leo Przibram at the Biological Research Institute , where he spoke to Dr. In 1910 about the relationship between pigment cells in fish skin and the sympathetic nervous system. phil. received his doctorate. In the same year he went as assistant to Hertwig in the Zoological Institute of the Ludwig Maximilian University of Munich, where he joined in 1912 with colored decision to bring in fish habilitation and lecturer in zoology and comparative anatomy was. During the First World War , he worked medically and bacteriologically at the Rudolfinerhaus in Vienna from 1914 to 1919 . In 1919 he was appointed associate professor again at Hertwig in Munich. 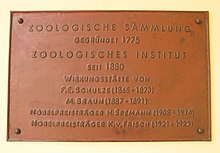 In 1921 von Frisch went to the University of Rostock as full professor of zoology and director of the institute . In 1923 he followed a call to Breslau , but then returned to the University of Munich in 1925, where he took over the management of the Zoological Institute. In 1924, together with Alfred Kühn , he founded the magazine for comparative physiology , which has been published as the Journal of Comparative Physiology since 1972 . With the support of the Rockefeller Foundation , he succeeded in setting up a new zoological institute in Munich in 1931/32 (this has since been demolished). During the Third Reich , it was difficult for Karl von Frisch to keep his job, especially since he had a Jewish grandmother and did not actively cooperate with National Socialism . Karl von Frisch was always very apolitical, but campaigned for the release of Polish academics imprisoned in the Dachau concentration camp . Only after he had started a scientific activity with research on nosemosis and research on increasing honey production, which was of importance for the nutrition of the population, was he left undisturbed at his workplace.

From 1941 to 1945 the Austrian marine researcher and zoologist Hans Hass was a frequent guest at Frisch. In their conversations, they exchanged their observations regarding the communication between fish and the task and function of their sideline organs . Hass was also interested in his discovery of the repellent in fish. It could possibly be used to repel sharks.

After extensive destruction of the Munich Zoological Institute in the Second World War , he went to the Karl-Franzens-Universität Graz in 1946 , where he held his inaugural lecture on November 7th, until he returned there in 1950 when the Munich Institute reopened. In 1958 he retired, but also continued his scientific research in the following years.

Karl von Frisch was with Margarete, geb. Mohr, married; his son, Otto von Frisch , was director of the State Natural History Museum in Braunschweig from 1977 to 1995 and presenter of the 1970s television series Paradiese der Tiere .

His most famous students include Martin Lindauer , Karl Daumer and Maximilian Renner , who continued his research. The extensive estate is in the Bavarian State Library .

Carinthian bee on the goldenrod

Karl von Frisch was best known for his research on the western honey bee ( Apis mellifera carnica ), but he also made important discoveries in other animals, especially in various fish.

Karl von Frisch, together with his student Hans Stetter, succeeded in proving the hearing ability of the fish and the discovery of a frightful substance in the skin of the fish. He was the first to prove that fish can also see colors, which has long been controversial.

The sense of smell

Frisch found out that bees can distinguish different flowering plants by their smell. Amazingly, their sensitivity to the “sweet” taste sensation is only slightly more pronounced than in humans. Due to the firm coupling of the sense of smell to the sense of touch, Karl von Frisch believed that a spatial odor perception of the bees was possible.

The color perception of bees is comparable to that of humans, but shifted away from red towards the ultraviolet. Therefore, they cannot distinguish the color red from black (colorless). However, the colors white, yellow, blue and purple can be distinguished. Color pigments that can reflect UV components expand the spectrum of differentiable colors by two more. Several flowers, which appear the same yellow to humans, can appear differently colored (multicolored patterned) to bees because of the different ultraviolet components. 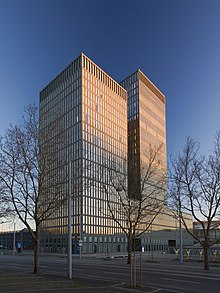 An image taken exactly at right angles to the sun with a polarization filter and wide-angle lens gives an impression of the polarization pattern of the sky: the sky is darkest in the middle, and it becomes lighter towards both sides.

The studies on the bees' ability to orient themselves are important. Karl von Frisch found out that bees can recognize the desired direction in three different ways: the sun, the polarization pattern of the blue sky and the earth's magnetic field , using the sun as a guiding compass and the alternatives under the special conditions of the cloudy sun or Apply to the darkness of the beehive .

The bee has an internal clock with three different synchronization or timing mechanisms. If the bee knows the direction of a feeding place from a morning excursion, it will find its location based on the position of the sun in the afternoon, as well as the exact time at which this source donates food.

The honeycombs (e.g. the new honeycombs of a swarm) are expanded according to Karl von Frisch on the basis of the magnetic sense in the same direction as in the home hive of the swarm. In the experiment, even circularly deformed honeycombs could be detected.

Karl von Frisch attributes the always vertical alignment of the honeycomb structure to the bees' ability to recognize the vertical through the head and the pendulum formed from it in interaction with a wreath of sensory cells in the neck area.

Findings about found feeding places can be passed on from bee to bee. A special dance language serves as a means of communication . The dances come in two forms: round dance and waggle dance.

The orientation works so well overall that the bees can find a source of food with the help of the waggle dance even if they have to fly a detour because of an obstacle, such as a mountain in between.

The majority of the findings were developed by Karl von Frisch with the Carnica bee breed . Experiments with other races resulted in a race-specific expression of the language elements, so that distance and direction information vary greatly.

Karl von Frisch could not prove a sense of hearing. However, the sensitive perception of vibrations was assumed and assumed for communication during the waggle dance. This was only confirmed later by Jürgen Tautz , Würzburg.

Karl von Frisch was very keen to bring biological understanding and the results of his research to laypeople. This is how the books Dance Language and Orientation of Bees and - with more recent research results - From the Life of Bees , Animals as Builders , Ten Little Housemates (first edition 1940) and Twelve Little Housemates (1976), You and Life - A Modern Biology were created for everyone (first edition 1936) and others.

Karl von Frisch has also published a number of poems. A quatrain with the title Resignation from 1967 is quoted as an example :

Man in his thirst for knowledge
Reflects and researches all his life,
In order then to see without:
Basically, he can't understand anything.

The Karl-Ritter-von-Frisch Medal is the most important science award in zoology in Germany. In memory of Karl von Frisch, the German Zoological Society (DZG) awards the prize, endowed with 10,000 euros, every two years to scientists whose work is characterized by excellent zoological achievements and the integration of findings from several individual biological disciplines. 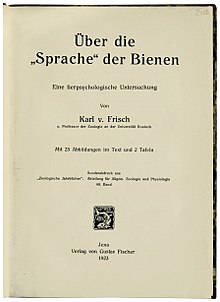