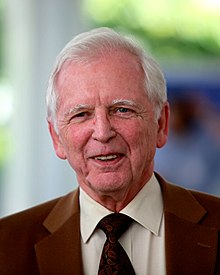 From 1983 to 2003 Harald zur Hausen was Chairman and Scientific Member of the Board of Trustees of the German Cancer Research Center (DKFZ) in Heidelberg . Under zur Hausen's leadership, the Cancer Research Center, which does not have any clinical bed departments, considerably expanded its collaboration with individual university clinics : so-called clinical cooperation units ensure the interlinking of basic research and clinical medicine in order to transfer research results into practice as quickly as possible.

From 2007 to 2011, zur Hausen was a member of the Scientific Advisory Board of the Zukunftskolleg at the University of Konstanz .

Zur Hausen was editor-in-chief of the International Journal of Cancer until the end of 2010 .

Since 1993 he has been married to Professor Ethel-Michele de Villiers , who also works at the German Cancer Research Center. Zur Hausen has three sons from his first marriage. Today he lives with his wife in the Hessian community of Wald-Michelbach in the Odenwald.

Zur Hausen's special field of research was the development of cancers from viral infections. As early as 1976 he published the hypothesis that human papilloma viruses (wart viruses) play a role in the development of cervical cancer (cervical cancer ). The suspicion soon turned into experimental scientific certainty. At the beginning of the 1980s, he and his group were able to isolate types HPV 16 and HPV 18 of the human papilloma virus from tissue suffering from cervical cancer for the first time. The discovery of the trigger of the third most common cancer in women opened up entirely new perspectives in prevention and treatment and ultimately led to the development of HPV vaccines , which have been available since 2006. Zur Hausen is currently (2014) concerned with the question of whether a diet with beef can induce cancer in humans ( Bovine Meat and Milk Factors ) : “That was the starting point for the idea that such virus infections could also be present in animals are not carcinogenic to them themselves, but if they are passed on to humans, they can possibly cause cancer. "

2008 Harald zur Hausen was together with Frenchman Luc Montagnier and the Frenchwoman Francoise Barre-Sinoussi of the Nobel Prize in Physiology or Medicine awarded.

For his professional achievements, Harald zur Hausen was also awarded numerous other prizes, including a. with the Robert Koch Prize (1975), the Charles S. Mott Prize of the General Motors Cancer Research Foundation (1986), the German Cancer Prize (1986), the Paul Ehrlich and Ludwig Darmstaedter Prize (1994), the Behring Lecture at the Philipps University of Marburg (1994), the Ernst Jung Prize and the Jacob Henle Medal (1996), the Charles Rodolphe Brupbacher Prize for Cancer Research together with George Klein (1999), the Prince Mahidol Prize (2005), the William B. Coley Award (2006), the Raymond Bourgine Award (2006), the Loeffler Frosch Medal (2007), the German Cancer Aid Prize (2007), the Johann Georg Zimmermann Medal (2007 ), the Warren Alpert Foundation Prize (2007), the Gairdner Foundation International Award (2008), the “Award for Lifetime Achievement in Cancer Research” from the American Association for Cancer Research (2008), the Tsungming Tu Prize (2011) and the Ernst Wertheim Prize (2012).

He was also awarded an honorary doctorate from the universities of Chicago (USA), Umeå (Sweden), Prague (Czech Republic), Salford (England), Helsinki (Finland), Erlangen-Nuremberg, Würzburg and Jerusalem. Along with other organizations, he is a member of the US National Academy of Sciences , a full member of the Heidelberg Academy of Sciences since 1986, a member since 1987 and vice-president of the Leopoldina Academy of Natural Sciences from 2003 to 2009 . In 1990 he was accepted as a full member of the Academia Europaea . In 1998 he became a member of the American Philosophical Society . In 2017 he was elected a Fellow of the American Association for the Advancement of Science . In April 2004 he was awarded the Great Federal Cross of Merit. In 2006 Harald zur Hausen received the Baden-Württemberg Medal of Merit . On November 4, 2008 he was made an honorary citizen of the community of Wald-Michelbach, where he lives. At the same time he was also awarded the title of Ambassador of the Bergstrasse .

On April 6, 2009, Zur Hausen was awarded the Grand Cross of Merit with Star of the Order of Merit of the Federal Republic of Germany by Federal President Horst Köhler in Bellevue Palace .

From January 1 to July 1, 2010, Harald zur Hausen was the successor of Dagmar Schipanski as honorary president of the German Cancer Aid . From the beginning of January 2014 to the end of January 2017, he was also Chairman of the Board of Trustees of the Paul Ehrlich Foundation, which awards the Paul Ehrlich and Ludwig Darmstaedter Prize.

On July 1, 2020, he was awarded the Order of Merit of the State of North Rhine-Westphalia .