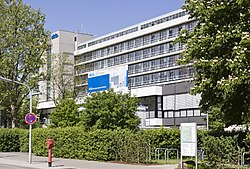 The communication center of the DKFZ next to the main building

The German Cancer Research Center (DKFZ) in Heidelberg is a biomedical research institution and foundation under public law . Around 3000 employees in over 90 departments and junior research groups research how cancer develops and which factors influence the cancer risk. On the basis of these results, they are developing new approaches in the prevention, diagnosis and therapy of cancer. In view of the rampant COVID-19 pandemic in Germany , the DKFZ and the German Cancer Aid Foundation and the German Cancer Society created a task force in March 2020 to provide free advice to cancer patients nationwide via their information services, Infonetz Krebs and the cancer information service KID, and to advise them on the development up to date to inform.

Together with the Heidelberg University Hospital , the DKFZ supports the National Center for Tumor Diseases (NCT) Heidelberg.

Michael Baumann, Chairman of the Board and Scientific Director of the DKFZ

The DKFZ was founded in 1964 as a national research institution, the authorized representative was the Heidelberg surgeon Karl Heinrich Bauer , on whose initiative the DKFZ can be traced back. In 1975 the DKFZ became a member of the working group of large research institutions, from which the Hermann von Helmholtz Association of German Research Centers emerged in 1995 . In 1977 the DKFZ joined the German Research Foundation , in 1979 it was a founding member of the regional cooperation network Tumor Center Heidelberg / Mannheim .

The state of Baden-Württemberg is the sponsor and also bears a 10% share of the financing; the federal government is the main cost bearer with a 90% share. According to the statutes of 2000, its organs are the board of trustees (with board of directors), the scientific committee and the scientific council . Michael Baumann has been the CEO and Scientific Director since November 1, 2016 , and Josef Puchta was the Commercial Director from 1996 to 2019 . Ursula Weyrich has been Commercial Director since January 2020.

The main building of the DKFZ on the “Im Neuenheimer Feld” (INF) campus was fundamentally renovated between 2006 and 2010, 30 years after it was first occupied. The estimated cost is around 70 million euros.

In 1992 the building for applied tumor virology (INF 242) was inaugurated, and in 2002 the genome research building (INF 580) in Technology Park 3. In 2007 the German Cancer Research Center acquired the INF 581 building in Technologiepark 4.

On 6 October 2008 the longtime CEO was Harald zur Hausen for his work on human papilloma viruses of the Nobel Prize for Medicine awarded. In 2014 the physicist Stefan Hell received the Nobel Prize in Chemistry; In addition to a position at the Max Planck Institute for Biophysical Chemistry in Göttingen, Hell is also head of a department at the DKFZ.

According to the American model, junior research groups are linked to a “tenure track”. There are currently 25 young and six junior groups doing research at the DKFZ.

Doctoral students at the DKFZ receive structured training based on an interdisciplinary curriculum at the Helmholtz International Graduate School of Cancer Research.

From 1966 to 1999, the research reactor TRIGA Heidelberg was operated at the DKFZ . In the summer of 2008, a 7-Tesla magnetic resonance tomograph was put into operation in a specially constructed building for research purposes .

In a "strategic partnership" between the DKFZ and the German Cancer Aid Foundation , an outpatient prevention clinic for participants in prevention studies and a citizen information center are to be created, research projects are to be coordinated and bundled, and prevention programs tailored to target groups are to be developed. Krebshilfe supports the project with 25 million euros from donations.

In addition, there are individual contacts with over 150 university and non-university research institutions abroad.

Offers to the public

With the Cancer Information Service (KID), the German Cancer Research Center has established a free, neutral and confidential information service on cancer since 1986. The offer is aimed at patients, interested parties and specialist staff. The KID website offers understandable and scientifically sound information. Trained doctors from the KID answer questions by email or on the phone (toll-free 0800-420-3040 number). The KID can be reached daily, also on weekends, from 8 a.m. to 8 p.m.

Since 2002, the DKFZ has been the sponsor of the Heidelberg Life Science Lab - a project to promote students who are particularly interested in mathematics and science.

The magazine "einblick" appears three to four times a year and can be subscribed to free of charge.