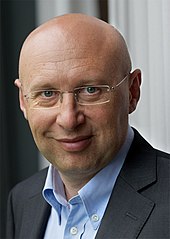 Stefan Walter Hell (born December 23, 1962 in Arad , People's Republic of Romania ) is a Romanian-German physicist and university professor . He is director at the Max Planck Institute for Biophysical Chemistry in Göttingen . In 2014 he was awarded the Nobel Prize in Chemistry together with Eric Betzig and William Moerner .

Stefan Hell comes from a Banat Swabian family from the village of Sântana ( Sanktanna in German  ), twenty kilometers from Arad , where he attended German school. From 1977 to 1978 he was a student at the Nikolaus-Lenau-Lyceum in Timișoara , before his family moved with him to the Federal Republic of Germany in 1978 and he passed the Abitur at the Carl-Bosch-Gymnasium in Ludwigshafen am Rhein .

Hell studied physics at the University of Heidelberg from 1981 . From 1984 to 1990 he was a fellow of the Konrad Adenauer Foundation . After completing his diploma in 1987, he began working with Siegfried Hunklinger on his dissertation, Imaging Transparent Microstructures in the Confocal Microscope , which he completed in 1990 with a doctorate . He then worked briefly as a freelance inventor . During this time he worked on ways to construct light microscopes that allow a higher resolution than those previously developed, and laid the foundation for 4Pi microscopy .

From 1991 to 1993 Hell worked in the main Heidelberg laboratory of the European Molecular Biology Laboratory . He succeeded in demonstrating the principle of 4Pi microscopy in practice and in significantly improving the depth resolution.

Hell was then employed from 1993 as a group leader at the University of Turku in Finland , in the Department of Medical Physics, where he developed the principle of STED microscopy (STED: Stimulated Emission Depletion). At the same time he spent a total of six months at Oxford University from 1993 to 1994 as a visiting scholar in the field of engineering. His habilitation in physics took place in Heidelberg in 1996. In the following year he became head of a junior research group at the Max Planck Institute for Biophysical Chemistry in Göttingen, which researched in the field of optical microscopy. Around the year 2000 the group succeeded in experimentally confirming Hell and Wichmann's theories.

With the invention and development of STED microscopy and related microscopy methods, Hell succeeded in showing that the resolution in the fluorescence light microscope, which is conventionally limited to around half a light wavelength (~ 200 nanometers), can be overcome. Hell was able to prove experimentally for the first time that the resolving power of the fluorescence microscope can be decoupled from the diffraction of light and increased to a fraction of the light wavelength (nanometer range). Since the work of Ernst Abbe (1873) on the diffraction limitation of the resolving power of microscopes, this was considered impracticable. For this achievement and its importance for other areas of science, such as the life sciences and basic medical research, he received the 10th German Future Prize on November 23, 2006 . He has been a member of the German Academy of Sciences Leopoldina since 2013 .

In 2014 Stefan Hell was awarded the Nobel Prize in Chemistry for the development of super-resolution fluorescence microscopy together with Eric Betzig and William E. Moerner .

Hell is married and has four children.