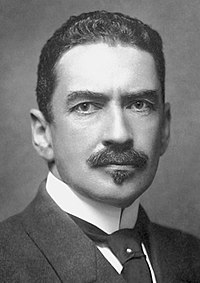 Hans Karl August Simon von Euler-Chelpin (born February 15, 1873 in Augsburg , † November 6, 1964 in Stockholm ) was a German - Swedish chemist of German origin. In 1929 he and Arthur Harden received the Nobel Prize for Chemistry “for their research on sugar fermentation and the role of enzymes in this process”.

He was the son of the later Bavarian Major General Rigas von Euler-Chelpin (1837-1923). and his wife Gabriele Furtner († 1931). He spent most of his childhood with his grandmother in Wasserburg am Inn . He went to school in the royal secondary school in Augsburg (predecessor of the Holbein-Gymnasium ), in Würzburg and Ulm and in 1891 passed the Abitur at the Wilhelmsgymnasium in Munich . After serving as a one-year volunteer in the 1st Field Artillery Regiment of the Bavarian Army in 1891/92, he studied at the Munich Art Academy and above all wanted to know more about color theory. In 1893 he turned to the study of chemistry to, first in Munich and then in Berlin , where he in 1895 Carl Friedheim with the issue of the effect of Molybdantrioxyd and Paramolybdaten to normal vanadates, and a new method of determination of vanadium pentoxide and Molybdantrioxyd next to each other via a PhD .

He took Swedish citizenship in 1902 . Euler-Chelpin nevertheless did voluntary service in the German air force during the First World War . During the Second World War, the professor was on a diplomatic mission for the German side.

Hans von Euler-Chelpin was married twice. Her first marriage to Astrid Cleve , a researcher at Stockholm University , had five children. His son Ulf von Euler became a well-known physiologist and also received a Nobel Prize in 1970 for his research on the chemical nature of noradrenaline at the synapses . His daughter Karin von Euler-Chelpin married the writer Sven Stolpe in 1931 . In 1913 the father married the Baroness Elisabeth von Ugglas. This connection gave birth to four children.

Euler was Chelpin after graduation and a short course on Physical Chemistry in Berlin a researcher at the Universities of Göttingen (1896-1897) and from 1897 in Stockholm, where 1,899 habilitation and work as a lecturer in physical chemistry. In 1906 he was appointed full professor of general and organic chemistry at Stockholm University. In 1929 Euler-Chelpin became director of the newly created Institute for Vitamins and Biochemistry at the university there. In 1941 he retired , but continued his research.

In 1929, Euler-Chelpin and Arthur Harden received the Nobel Prize in Chemistry for research into the alcoholic fermentation of carbohydrates and the role of the enzymes involved . Arthur Harden first dealt with the chemical effects of bacteria and from 1903 with alcoholic fermentation . Harden discovered that the ferment Zymase tracked down by Eduard Buchner consists of the actual zymase and the coenzyme Cozymase, which only produce fermentation when they work together. Euler-Chelpin, on the other hand, was able to convincingly describe the process of sugar fermentation and the action of the fermentation enzymes using the methodology of physical chemistry. This explanation was important in understanding the processes involved in delivering energy in muscles .

The chemist dealt with almost all areas of his profession in his life: Among other things, Euler-Chelpin was able to explain the relationships between different groups of substances, such as vitamins , hormones , enzymes , antibodies , genes and viruses . Their mutual interaction is elementary in the intake of food in the body.

From 1923 the researcher concentrated on the area of ​​coenzymes that Harden had scientifically documented. Euler-Chelpin provided valuable foundations for Cozymase, whereby later in science the knowledge matured that D-ribose was that sugar component. In 1931 the professor managed to isolate the coenzyme NAD ( nicotinic acid amide-adenine-dinucleotide ) and to decipher its structure.

In his retirement he focused on cancer research .