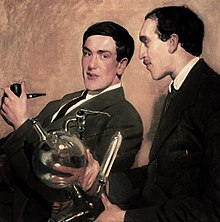 Semyonov's father was a former officer and estate manager, while his mother Jelena Alexandrovna (maiden name: Dmitrieva) was of noble origin. From 1910 on, the family lived in Samara , where Nikolai graduated from secondary school in 1913. Then he studied from 1913 to 1917 Physics and Mathematics at the University in St Petersburg , even though it had provided his father for a military career and did not think much of science. The son's decision led to a rift within the family and an alienation between father and son that was only gradually overcome. During his studies Semyonov heard lectures from Abram Joffe and became one of his favorite students. At the same time he met the young physics student Pyotr Kapiza in Joffes laboratory , who became his closest friend. This friendship lasted all her life. Semjonow completed his studies in 1917 with the grade magna cum laude and stayed at the university as a doctoral student with Joffe.

In order to escape the political turmoil that reigned in Petrograd after the October Revolution , Semyonov traveled to his parents in Samara. There he volunteered in the white army and fought in the Russian civil war . However, after a few months he left the fighting force and first traveled to Samara, and from there to Tomsk . There he worked in the laboratory of the professor of geophysics B. Weinberg and became a lecturer at the university there. In September 1919 Semyonov was forcibly recruited into the white army of Admiral Kolchak , but only used in the communications service, so that after the conquest of Tomsk by the Bolsheviks he was released from the army and not persecuted. In 1920, at the invitation of his doctoral supervisor Joffe , he went to the Laboratory for Electron Processes at the Physico-Technical Institute in Petrograd, which was located in the premises of the Polytechnic Institute there, and took over its management. Semjonow was involved in the establishment of several physical-technical institutes in the Soviet Union and worked together with scientists who later became famous, such as Juli Borissowitsch Chariton and Viktor Nikolajewitsch Kondratjew . Together with Joffe he set up an institute for physical chemistry in Leningrad and was appointed professor in 1928, although he had not previously managed to finish his doctoral thesis - he was to receive his doctorate in 1946 without ever having written a dissertation .

In 1931 he was appointed head of the Institute of Chemical Physics of the Soviet Academy of Sciences in Leningrad, which was created from his laboratory on October 15 of that year by a decree of the Supreme Council of Economics . He also took over a professorship for physical technology at Lomonossow University in Moscow. In 1932 Semyonov was elected a full member of the Academy of Sciences. During this time, Semjonov's main focus was on the further refinement and explanation of the kinetics and the associated mechanisms of chemical reactions. The book Chain Reaction , written by Semjonow in 1934, appeared in English a year later and became the standard work for kinetic chemistry. In 1941 he received the Stalin Prize for the book The Heat Theory of Combustion and Explosion Processes . In 1941, the Soviet physicist Nikolai Sergejewitsch Akulow , who was in competition with him in the field of chemical chain reactions (but was actually an expert on magnetism), tried to destroy his reputation by accusing him of plagiarism and vague, but at the time dangerous allegations of cosmopolitanism . Semyonov resisted and was able to achieve that a commission from the Soviet Academy of Sciences acquitted him and Akulov himself suffered the consequences by losing his chair at Lomonosov University.

After the German invasion of the Soviet Union in 1941, the Semyonov Institute was relocated from Leningrad to Kazan , where his staff dealt with the problem of improving conventional explosives. Semyonov succeeded in moving his institute to Moscow instead of having to return to Leningrad after the war . At the same time, Semyonov founded the Chair of Chemical Kinetics at Lomonosov University in Moscow in 1944, which he was to head for almost forty years. The professors included such important scientists as Nikolai Markowitsch Emanuel and Wladislaw Wladislawowitsch Wojewodski . In 1945 Semyonov also became a lecturer at the Moscow Institute of Physics and Technology (MIPT).

During this time he was called in to work on the Soviet atomic bomb and took over the manufacture of measuring devices. From 1948 to 1949 almost half of the Institute of Chemical Physics was temporarily located near Semipalatinsk , where the nuclear test site was. However, Semyonov himself was not allowed to enter the premises because the Soviet leadership was afraid that he might not be loyal enough. But later this did not represent an obstacle to award Semyonov together with other leading figures of the nuclear project with the Stalin Prize. A year later, Semyonov fell out of favor for good. The reasons for this were his past, especially his participation in the civil war on the side of the "whites", his friendship with Pyotr Kapiza, who was considered "uncomfortable" by the regime, and his relationships with British scientists. Semyonov was accused of "hunching over" in front of the West. Only after Stalin's death in March 1953 was Semyonov allowed to research again unhindered.

Receiving the Nobel Prize in Chemistry in 1956 made Semyonov at one stroke a famous man throughout the Soviet Union. The new Kremlin leadership under Nikita Khrushchev also sought proximity to the scientist. However, he was not allowed to take his children with him during the trip to Stockholm to be awarded the Nobel Prize, as they were afraid he might flee to the West. Semyonov's popularity was reflected in his election as Vice-President of the Academy of Sciences (from 1963 to 1971), in his position as "advisor on chemical issues" to the Soviet leadership and in several awards.

At the end of the 1950s, at Semyonov's suggestion, a test site for research into burning and explosion processes was established in the village of Chernogolowka near Noginsk , and he took over management of it. The later human rights activist and dissident Sergei Kovalev was one of Semyonov's employees at the time . However, Semyonov, who had been a member of the Communist Party since 1947 , never publicly supported the dissident scholars who had grouped around Andrei Sakharov .

In his last years he devoted himself heavily to ecological problems and overcoming the effects of air pollution . He was one of the first Soviet scientists who warned of global warming and called for factories and factories to be quickly equipped with environmentally friendly filters. He founded the journal Chemische Physik and became its editor-in-chief .

It was only a few months before his death at the age of 90 that he gave up the management of the Institute for Chemical Physics that now bears his name.

Nikolai Semjonow concentrated his work primarily on the theory of reaction mechanisms and researched reaction kinetics and chemical chain reactions . He tried to make the theories developed by Max Bodenstein about the reaction processes in chain reactions usable for various applications and problems.

In 1924 he was able to establish that phosphorus vapors need a certain critical oxygen partial pressure in order to ignite. He was also able to see that after the start reaction of a chain reaction, as in the following reactions, several active particles are formed, which lead to a branching of the reaction and at the same time make the overall reaction more violent. According to his theories, these active particles can be used to control and slow down a chain reaction.

His results are used, on the one hand, in the production of low-knock fuels and explosives with predictable explosion processes . On the other hand, they help in the development of new industrial manufacturing processes, especially in the plastics industry . For example, the work laid the foundation for the industrial manufacture of polymerisation products .

In 1921 he married Maria Issidorovna Borejsche-Liwerowskaja, the professor of Romance studies and translator of Dante's works into Russian. She was older than Semyonov and married before; from her first marriage she had four children, although the eldest children never recognized Semyonov as a stepfather. After his wife died of cancer in 1923, Semyonov married her niece Natalja Nikolajewna Burzewa, a music teacher, in 1924. From this marriage Semyonov had two children: son Yuri (born 1925) and daughter Lyudmila (born 1928). In 1971 he got divorced and married Lidia Shcherbakowa for the third time, who was one of his assistants at the institute. This marriage remained childless.