In 1966 he received the Nobel Prize in Chemistry “for his fundamental work on chemical bonds and the electronic structure of molecules using the orbital method ”.

Mulliken was born in Newburyport , Massachusetts . His father, Samuel Parsons Mulliken, was a professor of organic chemistry at the Massachusetts Institute of Technology (MIT). As a child, Robert Mulliken learned the names and botanical classification of plants and generally had an excellent but selective memory. He learned the German language so well that he could skip the corresponding high school course, but he couldn't remember the name of his German teacher.

Mulliken helped his father create his four-volume work on the identification of organic molecules and became an early expert in the nomenclature of organic compounds.

At Newburyport High School he chose the science branch. He won a scholarship at MIT that his father had already received. In his first semesters he wrote his first scientific publication on the representation of organic chlorides. He also took some chemical engineering courses and worked as a student trainee at various chemical plants in Massachusetts and Maine. He received his BS in chemistry from MIT in 1917.

During the First World War he developed chemical weapons for the American Army at the American University in Washington, DC ; he suffered severe burns in the process. 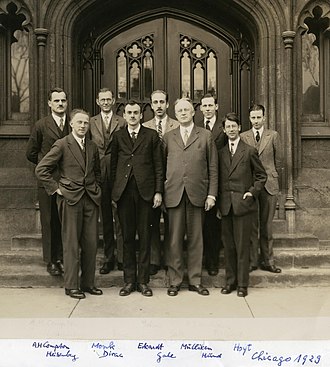 After the war he worked on the influence of zinc oxide and carbon black on rubber , but began a Ph.D. in 1919. Program at the University of Chicago .

At Harvard University he learned spectrographic techniques from Frederick Albert Saunders and quantum theory from Edwin Kemble . At this time he met many of the later luminaries such as Robert Oppenheimer , John H. van Vleck and Harold C. Urey , as well as John C. Slater , who had worked with Niels Bohr .

In 1925 and 1927 he traveled to Europe to work with important scientists such as Erwin Schrödinger , Paul Dirac , Werner Heisenberg , Louis de Broglie , Max Born , Walther Bothe and Friedrich Hund . Mulliken was particularly influenced by Hund, who worked on the quantum mechanical interpretation of diatomic molecules. As a result, he developed his molecular orbital theory , also known as the Hund-Mulliken theory .

From 1926 to 1928 he taught physics at New York University . He then went to the University of Chicago as an associate professor , where he received a full professorship in 1931. During the Second World War, he headed the Information Office for the University's Plutonium Project from 1942 to 1945. In 1961 he became a Distinguished Professor of Physics and Chemistry. In 1985 he retired.