At the time of the American Declaration of Independence in 1776, what is now Arlington County was part of the British Crown Colony of Virginia. In 1791, three years after the American Constitution came into effect , the hundred square miles of the US federal district on the Potomac River was created and the new capital of the United States was to emerge in the years to come. This federal district originally corresponded to exactly one square and at that time also included those lands on the western side of the Potomac that are now again part of Arlington County and Alexandria (Virginia) and thus to Virginia. The latter areas were still known as Alexandria County of the District of Columbia at that time . The name Arlington County did not exist at the time.

Alexandria was an important port and hub for the slave trade . After 1830, the anti-slavery movement grew in Virginia, as in other parts of the United States . The advocates of slavery in Virginia then backed a referendum in the important slave marketplace of Alexandria to get a petition to the American Congress. The aim of the action was to add an additional pro-slavery county in Virginia. On July 9, 1846, this goal was achieved. Since then, Alexandria County , d. H. also what is now Arlington County back to Virginia.

In 1852, the city of Alexandria was separated from the rest of the county and has been a county since then. This gave rise to recurring confusion between the rest of County Alexandria and Alexandria City. For this reason, the former county was renamed Arlington County in 1920 , after the Arlington House , which is located on the also named Arlington Cemetery .

The Pentagon seen from the southwest along with the Potomac River and the Washington Monument in the background.

The Tomb of the Unknown Soldier is located on a hill overlooking downtown Washington DC . Another popular site is the grave of President John F. Kennedy . Kennedy is buried here with his wife Jacqueline Kennedy Onassis and some of their children. An eternal flame burns on his grave . His brother, Senator Robert F. Kennedy, is also here. Another US President and Chief Justice of the United States, William Howard Taft , is the only other US President to be buried in Arlington National Cemetery.

Arlington is also home to the Pentagon , the headquarters of the US Department of Defense . It was inaugurated on January 15, 1943 and is the largest office building in the world. Although it is in Arlington, it has an address belonging to Washington DC.

The building is pentagonal in shape and has five floors. Each floor has five circumferential corridors. It houses approximately 26,000 military and civilian employees. 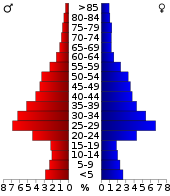 As of the 2000 census , Arlington County had 189,453 people in 86,352 households and 39,290 families. The population density was 2828 inhabitants per square kilometer. The racial the population was composed of 68.94 percent white, 9.35 percent African American , 0.35 percent Native American, 8.62 percent Asian, 0.08 percent of residents from the Pacific island area and 8.33 percent from other ethnic groups Groups; 4.34 percent were descended from two or more races. Hispanic or Latino of any race were 18.62 percent of the population.