Williamsburg is a city in the southeast of the US state Virginia with around 11,998 residents. It is the county seat of James City County , but does not belong to him. Part of the city has been restored as 18th-century Colonial Williamsburg , largely funded by John D. Rockefeller, Jr. , who, according to his son David, has invested about $ 60 million in the project over 30 years. 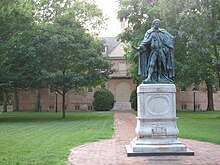 College of William and Mary, statue of Lord Botetourt (formerly Rector) in the forecourt

Large parts of Williamsburg stand since 1931 as Colonial Williamsburg under monument protection . For example the Capitol (1701/05), the Governor's Palace (1706/20, reconstructed 1927-34) and the College of William and Mary (1695/99). They represent the epoch of the creation of the nation.

At the beginning of the 20th century, the restoration and rebuilding of Colonial Williamsburg was one of the largest projects of its kind in the United States. It was v. a. accompanied by William Archer Rutherfoord Goodwin (1869–1939) and John D. Rockefeller, Jr. and his wife Abby Aldrich Rockefeller to celebrate the early history of the United States .

Many of the missing colonial structures were reconstructed in their original location in the 1930s. Much has been set back to the structural status of the 18th century. Most of the buildings are open to tourists and Colonial Williamsburg is visited by more than a million visitors from around the world each year. Today it is a living history museum, in which people in historical costumes interpret life in the 18th century.

The DeWitt Wallace Decorative Arts Museum has an extensive collection of American and British antiques. It includes furniture, metals, ceramics, glass, paintings, prints, firearms and textiles from the 17th, 18th and 19th centuries. Affiliated to the museum is the Abby Aldrich Rockefeller Folk Art Museum , which is the nationwide leading center for the research, preservation and exhibition of American folk art and holds the extensive folk art collection of Abby Rockefeller.