Charlottesville is an independent city that is completely surrounded by Albemarle County in the US state of Virginia . It is located on the small Rivanna River , about an hour's drive west of Richmond and a two-hour drive southwest of Washington, DC, covering an area of ​​26.6 km 2

The city was named after Princess Sophia Charlotte von Mecklenburg-Strelitz , the wife of King George III. of Great Britain.

Although the city is not part of Albemarle County, it is the administrative center (the county seat). It is home to the renowned University of Virginia founded by Thomas Jefferson and the CFA Institute . Charlottesville has around 49,000 inhabitants (as of 2016), which grows by almost 20,000 university students during the semester.

In 2004, Charlottesville was rated in Cities Ranked and Rated as the best place to live in the USA due to quality of life, climate and cost of living.

During the War of Independence in Charlottesville from 1779 to 1781, captured British and Allied troops (so-called Convention Army ) were interned. The prisoners were transferred to Pennsylvania in the spring of 1781 when the British forces launched initiatives in Virginia.

In the same spring, the Virginia government under its Governor Thomas Jefferson fled to Charlottesville and Monticello , Jefferson's residence near Charlottesville, after an attack on the capital Richmond . When the British general Charles Cornwallis found out on June 1, 1781, he ordered the arrest of the government, which included many leaders of the revolution, by British Lieutenant Colonel Banastre Tarleton .

On June 3, Tarleton, known for its brutality, moved in a hurry towards Charlottesville with 180 cavalrymen and 70 mounted infantrymen. With Virginia largely spared fighting from 1776 to 1780, most of the troops were deployed far away, and Tarleton faced no resistance. That night, however, the troop was spotted in Louisa County by Jack Jouett , who suspected an attack on the government in Charlottesville. He managed to overtake the force and warn the Virginia government on the morning of June 4th. Jefferson and most of the government escaped, and only seven government officials were captured by the British in Charlottesville. Monticello was searched but was not damaged or looted at Cornwallis' orders.

The University of Virginia was founded in 1819 and became the city's most important economic factor.

During the American Civil War , the city was spared from fighting. From March 3 to 6, 1865 - one month before the end of the war - the city was occupied by troops from the Northern States under General Custer and Philip Sheridan . City and University of Virginia officials persuaded Custer to spare the university, and there was no bloodshed.

On August 12, 2017, hundreds of right-wing extremists , neo-Nazis and Ku Klux Klan supporters marched through Charlottesville. They clashed with counter-demonstrators. 20-year-old James Alex Fields Jr., who had previously participated in the neo-Nazi demonstration, deliberately drove his car into a crowd of counter-demonstrators, killing Heather Heyer and injuring at least 19 people. Both inmates died when a police helicopter crashed. Terry McAuliffe, the governor of Virginia , declared a state of emergency in order to be able to summon National Guard forces to Charlottesville.

Monticello , residence of Thomas Jefferson off the Charlottesville city limits

Most visitors come to Charlottesville to, designed by Thomas Jefferson University of Virginia to visit, in which mankind list of World Cultural and Natural Heritage of UNESCO has been added. The city also has a small, listed pedestrian zone that has been declared historic.

Near the city's former residences of three former are US presidents : one and a half kilometers from the city limits, there are the former plantation Monticello by Thomas Jefferson, whose house jointly with the University of Virginia by the UNESCO as a world heritage site was listed. Less than two kilometers away is Ash Lawn-Highland , the former residence of James Monroe , the 5th President of the USA. About 45 minutes north of Charlottesville is Montpelier , the former residence of James Madison , the 4th President of the USA. Shenandoah National Park is half an hour's drive west of Charlottesville . 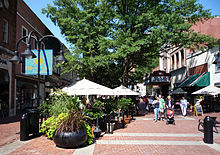