The United States Census Bureau , officially the Bureau of the Census ( USCB for short ; German  " Census Office " ), based in Suitland , Maryland, is part of the United States Department of Commerce . It was founded in 1903 and today has around 12,000 employees.

The main task of the agency is to carry out the census, which usually takes place every ten years ( United States Census - Population & Housing Census) and the annual American Community Survey . The population of the United States should be statistically recorded at least once every ten years. For example, the distribution of representatives in the United States House of Representatives is based on the determined number of inhabitants . Are also created statistics on geography, population (u. A. Age, income) and economy . It has twelve regional offices , which are temporarily increased for the ten-year censuses. The sole purpose of the censuses and statistics is to provide general statistical information. Answers are recorded and created individually (per resident, company), but only consolidated, general statistics are published. Here, you want privacy a top priority. By law, no data may be published that allow conclusions to be drawn about individual persons, households or companies. 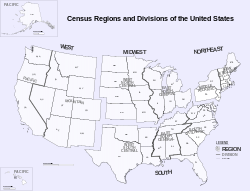 Breakdown of the Authority's regions and regional offices