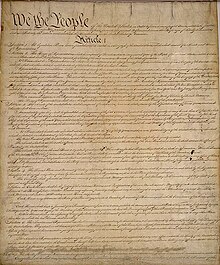 The United States Constitution describes the framework of the American system of government in seven articles. It came into effect on March 4, 1789 after the Constitutional Convention in Philadelphia . 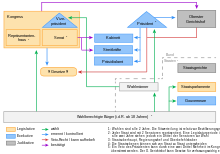 According to the US Constitution , the Federal government of the United States includes all state organs at the federal level of the United States of America (the term is therefore misleading in German , because "government" there only means the executive part ). It consists of three separate branches:

Through a system of separation of powers ( checks and balances ) , each of these branches has the opportunity and task to work independently and to have a controlling effect on the other branches.

Article 1 of the Constitution assigns all legislative power of the federal government to Congress , which is divided into two chambers, the Senate and the House of Representatives . The Senate consists of two members for each state. It currently has 100 members. In contrast, the distribution of seats in the House of Representatives is based on the population of the individual states; the constitution does not stipulate a specific number of MPs. In almost all states, the members of both chambers are determined by relative majority voting. The only exceptions are Louisiana and Washington , both of which use runoff elections when no candidate achieves an absolute majority .

The US Constitution does not contain specific reference to the establishment of congressional committees . As the nation grew, the need to deepen the legislative process arose. The 108th Congress (2003–2005) had 19 standing committees in the House of Representatives and 17 in the Senate. There are also four other joint permanent committees with members from both chambers. These committees serve to advise on Library of Congress , press , tax , and business matters. Due to the increased workload, Congressional committees have formed about 150 subcommittees.

Congress has the task of overseeing and influencing the executive branch. Congressional oversight is designed to prevent waste and corruption, safeguard fundamental rights, ensure law enforcement, collect information for bills, notify the public of new bills, and evaluate the administration of the executive branch. The oversight relates to cabinet departments, administrative authorities, supervisory commissions and the presidency. The oversight function is exercised in many forms, including:

Legislative powers of the federal government

The US Constitution explicitly gives Congress a number of legislative powers . These include competencies to determine the:

In addition, Congress generally has the power to enact all laws necessary to carry out its constitutional functions. The states have all other legislative powers .

According to Article 2 of the Constitution, the Executive consists of the President and his delegates.

The president is both head of state and head of government as well as supreme commander of the armed forces and highest diplomat. The office of President of the United States is one of the most powerful offices of its kind in the world. The President's constitutional responsibility is to ensure that the laws are carried out to the best of his knowledge and belief. To do this, he presides over the entire executive branch of the federal government, an administrative apparatus of some four million employees, including one million active-duty military personnel. In addition, the President has important legislative and judicial powers. Within the Executive Branch, the President has extensive powers to administer national affairs and, by executive order , to determine its organization and work.

The President has veto power over laws passed by Congress. Following an abuse of office investigation by the House of Representatives, the president can be removed by a two-thirds majority in the Senate ( impeachment ). Removal from office is possible in cases of treason , corruption and other gross criminal acts. The President cannot dissolve Congress or call extraordinary elections. However, the President can pardon criminals who have violated federal law, issue executive orders, and, in cooperation with the Senate, appoint the judges of the Supreme Court and all federal courts.

The day-to-day administration and execution of federal laws is the responsibility of the 15 federal ministries established by Congress for specific purposes. The President, with the advice and consent of the Senate, appoints ministers who run the agencies under his direction.

The ministers form the President 's Cabinet with some other members of the government, currently Vice President , White House Chief of Staff , Head of the Environmental Protection Agency , Director of the Office of Management and Budget , Trade Representative , UN Ambassador and Chairman of the Council of Economic Advisers .

There are also a number of independent agencies such as the Central Intelligence Agency , the Food and Drug Administration and the Environmental Protection Agency .

In the English original usage, the term administration refers to both the entire government apparatus below the president and the president himself, i.e. not just the administrative authorities. Especially in journalistic language in Germany, the term administration is therefore often used instead of the term federal government , since the latter term in the German general understanding only means the cabinet as a quorum. The level of the state secretaries and council commissions is usually not included, but they are also authorized to give instructions to the administrative authorities assigned and can draw up draft laws.

The federal government of the United States consists of 87,504 agencies, offices and departments.

Under the Constitution, the First Congress had divided the country into judicial districts and established federal courts for each district. Since then, the judicial system has evolved into the current structure of the Supreme Court, 13 Courts of Appeal, 94 District Courts and two specialized courts. Congress retains the power to establish and dissolve federal courts and to determine the number of judges in the courts. However, Congress cannot dissolve the Supreme Court, but it can determine the number of Chief Justices.

There are three tiers of general jurisdiction courts dealing with criminal and civil proceedings. The other courts, including the bankruptcy courts and the tax court, specialize in hearing specific cases. The bankruptcy courts are attached to the district courts but are not technically considered part of the "Article III" jurisdiction as their judges are not appointed for life. Accordingly, the tax court is not an Article III court.

The federal district courts are the first instance courts where lawsuits are filed and decided. The federal courts of appeals are appellate courts that hear appeals and revisions of district court judgments and decisions of certain federal agencies. The Supreme Court hears appeals on decisions of the appellate courts or state supreme courts (on issues of constitutional concern). The Supreme Court also has first instance jurisdiction in a very small number of cases.

The reach of the federal courts includes both civil actions for damages and other relief and criminal cases under federal law. The provisions of the Constitution have created a complex interplay between the federal and state courts. On the one hand, the federal courts do not usually deal with cases governed by state law. On the other hand, some cases falling under federal jurisdiction are heard and decided by state courts. Both court systems therefore have exclusive jurisdiction in some areas and joint jurisdiction in others.

The Constitution ensures judicial independence by allowing federal judges to serve as judges for life. They usually serve until their death, retirement, or resignation. However, judges can be removed from office for abuse of office like the President and other members of the government. The federal judges themselves are nominated by the President and confirmed by the Senate. Another constitutional safeguard relates to salary, which cannot be reduced during a judge's term, although salary may be reduced for future appointments by Congress.

Governments of the States of North and South America