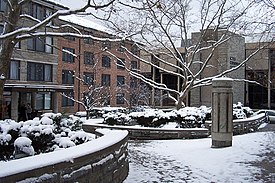 Cornell University was founded in 1865 by Ezra Cornell , a businessman and pioneer in the telecommunications industry, and Andrew Dickson White , a noted scholar and politician. The motto of the college, formulated by Ezra Cornell in 1865, is “I would found an institution where any person can find instruction in any study” (“I wanted to found an institution where anyone can study any subject”); it can be found in abbreviated form in the university's coat of arms.

Today more than 20,000 people study at the three main locations in Ithaca, New York City (human medicine and Cornell Tech) and Doha ( Qatar ). Cornell is a numerically large member of the Ivy League and to date has 47 Nobel Prize winners among its students and faculty. The university is regularly among the top 15 in the world in various rankings. The QS Ranking lists them in 14th place worldwide in 2018. The admission rate for graduates in 2022 is 10.3%. Cornell University is a member of the Association of American Universities , an association of leading research-intensive North American universities that has existed since 1900, and has guest status in the Euroleague for Life Sciences .

In December 2011, plans for a large graduate school from Technion and Cornell University in New York were published: A new New York City Tec campus is to be built on Roosevelt Island with investments of 2 billion US dollars on the previous site of the Goldwater Memorial Hospital . Private donations made a significant contribution to the financing. For example, Charles Feeney contributed $ 350 million and the Bloomberg Foundation contributed $ 100 million. In addition to an emphasis on engineering courses, degrees from Business School (MBA) and Law School (LL.M.) are offered in New York City. Regular teaching at Cornell Tech began in the fall semester of 2017.

Cornell's sports teams are the Big Red . Cornell University is a member of the Ivy League .

Cornell University has the most fraternities in the country .