Bad Religion is a punk band from Los Angeles whose trademark are their snappy, socially critical lyrics.

The history of the band

The group with the distinctive "Crossbuster" logo was founded in 1980 by Greg Graffin (vocals, keyboards), Brett Gurewitz (guitar), Jay Bentley ( bass ) and Jay Ziskrout ( drums ) against the backdrop of the burgeoning American punk scene in Los Angeles founded. The first self-titled EP was released in 1981 on Gurewitz's newly founded label Epitaph Records , and in 1982 the first album How Could Hell Be Any Worse? , which is now regarded as one of the most significant albums of early US West Coast punk. After a brutal but unsuccessful change of style (' Into the Unknown ', Epitaph Records, 1983), the majority of the musicians dropped out, and many copies of the record were returned by disgruntled fans; today this no longer available album is a coveted collector's item. A year later, an EP was released with Back to the Known , on which the original style was taken up again.

In 1987 the band reunited with Greg Graffin, Brett Gurewitz, Greg Hetson (guitar), Jay Bentley and Pete Finestone (drums) to record a new album. This record, Suffer (Epitaph Records, 1988), offered something new in punk rock: fast but very melodic songs with the polyphonic chants and background choirs typical of the band as well as occasional abrupt changes in rhythm. In addition, there was the gesture-rich appearance as well as the clear singing of graffins, which is characterized by exact pronunciation and metrics. In terms of content, the band also created a style that was shaped by a distant commentary, academically, philosophically and literarily influenced and inspired by political and scientific publicists such as Noam Chomsky , Edward O. Wilson and Richard Dawkins and thus stood out from the stereotypes of punk rock . To this day, Suffer is considered by many to be one of the best punk albums ever and was a style-defining element of melodic punk rock . In the years that followed, Bad Religion quickly made a name for itself in concert appearances thanks to the energetic and audience-oriented shows, and the band continues to tour the world regularly for each new release. The tour to the Suffer album took the group to Germany for the first time in 1989. The subsequent albums No Control (Epitaph Records, 1989), to which a new edition of the first EP was added in limited numbers, and Against the Grain (Epitaph Records, 1990) tied on the style of Suffer .

After Pete Finestone left the band in 1991, Bobby Schayer got on as a drummer, and Generator (Epitaph Records, 1992) and Recipe for Hate (Epitaph Records, 1993) were released, on which there were some small and partly grunge- influenced style changes and various guest musicians such as Eddie Vedder ( Pearl Jam ) and Johnette Napolitano ( Concrete Blonde ) could be heard. In 1994 the band switched to the major label Atlantic Records , as Brett Gurewitz and bassist Jay Bentley were very much involved in the label work with Epitaph, especially due to the surprising success of the offspring album Smash (at Epitaph), and the band and the record company separated should be. On their major debut, Stranger Than Fiction ( Sony / Atlantic Records, 1994), Bad Religion was stylistically based on the albums before Recipe for Hate . This time, too, different guests came with Jim Lindberg ( Pennywise ), Tim Armstrong ( Rancid ) and Wayne Kramer ( MC5 ). Stranger Than Fiction remains the band's most commercially successful album to date.

After this album, Brett Gurewitz left the band to take care of his Epitaph label. With that, the group lost an important songwriter , as Graffin and Gurewitz had always been responsible for writing the songs. In spite of this, Bad Religion continued, and Brian Baker, one of the best guitarists in the punk rock and hardcore scene, joined the band. In return, he even turned down an offer from REM to play as an additional guitarist on their monster tour. Brian Baker played or still plays in hardcore bands like Minor Threat and Dag Nasty . Like the other band members, he took part in the compositions in the following years, but Greg Graffin had to contribute most of the songwriting. While the next album The Gray Race (Sony / Atlantic Records, 1996) continued the quality of the last release with Brett Gurewitz, the following records No Substance (Sony / Atlantic Records, 1998) and The New America (Sony / Atlantic Records, 2000) failed to convince many fans and critics and stylistically oriented themselves more towards Greg Graffin's folk- influenced solo album American Lesion (Atlantic Records, 1997) than the classic Bad Religion sound. Brett Gurewitz only released the single Hate You with his new band The Daredevils after the separation (Epitaph Records, 1996).

However, after Brett Gurewitz reappeared on the 2000 album The New America as co-writer of the track Believe It and fans hoped for a reunion with Bad Religion were raised, he actually returned to the band in 2001. With the expiration of the contract with Atlantic Records Bad Religion returned to Gurewitz 'record label Epitaph Records. In addition, Bobby Schayer, who could no longer play the drums professionally due to a shoulder injury, was replaced by Brooks Wackerman . He is considered one of the best punk drummers, played with the Suicidal Tendencies and The Vandals and comes from a well-known family of musicians; his brother Chad was already on the drums with Frank Zappa . With this new line-up and new inspiration, the album The Process of Belief (Epitaph Records, 2002) was released in 2002, which is based on the 1994 work Stranger Than Fiction and offers fast, energetic and melodic punk rock. With Greg Hetson, Brian Baker and Brett Gurewitz, Bad Religion could now fall back on three guitarists, although Gurewitz is not part of most tours due to the work with his label. The successor The Empire Strikes First (Epitaph Records, 2004) musically tied back to the typical style of the band and this time mainly focused on political events such as the Third Gulf War . In the same year, remastered new editions of the albums were released from 1982 to 1992.

In autumn 2005 Bad Religion played two evenings in a row at the Palladium Club in Hollywood , had the two sold-out concerts recorded with ten cameras and released the recording on DVD. Live at the Palladium (Epitaph Records, 2006) can be viewed as a retrospective of the band's previous career, which, similar to previous live videos ( Along the Way and Big Bang ), includes interview parts and video recordings from the band's early days in addition to the actual concert. In 2007 the band released their next album called New Maps of Hell , which stylistically linked to its predecessor. In addition, Brett Gurewitz produced Greg Graffins' second solo album.

For the 30th anniversary of the band, a live album was released on May 18, 2010, which could be downloaded for free for a short time. In September 2010, The Dissent of Man, the band's 15th studio album, was released.

On January 18, 2013, the 16th studio album True North was released . Stylistically, the album is strongly based on the early work of the band in the late 1980s and consists for the most part of fast, short, hardcore punk songs. With 10th place it reached the highest position in the German album charts since Stranger Than Fiction 1994 (6th place). In the US, it was the most successful album in the band's history at number 19 in the local charts.

In the same year, on October 29th, Bad Religion released Christmas Songs, an album on which they covered eight traditional Christmas carols in the typical style of the band. These songs are also supplemented by a new mix of the song American Jesus (originally published on Recipe For Hate ). It is the band's first release since 1983 that Greg Hetson is not involved in, as he has been taking a break from the band since April 2013. Hetson has meanwhile been replaced by Mike Dimkich (among others active in The Cult) as the new guitarist.

In October 2015, drummer Brooks Wackerman left the band; in November he was introduced as a member of Avenged Sevenfold . He was succeeded by Jamie Miller in February 2016. 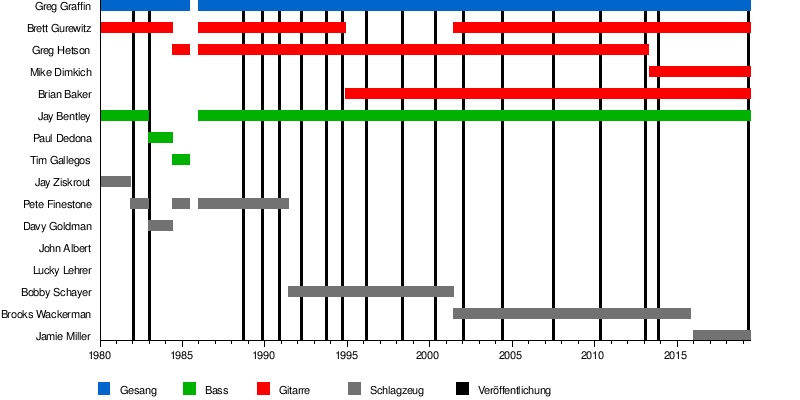