The Generaloberst-Beck-Kaserne is a barracks of the Bundeswehr in Sonthofen in the Oberallgäu district . Originally the building was one of twelve Adolf Hitler schools distributed throughout Germany for the training of National Socialist cadres. As Ordensburg Sonthofen it was, next to Krössinsee in Pomerania and Vogelsang in the Eifel, one of three NS-Ordensburgen during the time of National Socialism . As a Bundeswehr barracks, it was named in 1956 after the former chief of the General Staff of the Army andResistance fighter against the Nazi regime, Colonel General Ludwig Beck , named.

Model of the NS-Ordensburg Sonthofen (ca.1934) 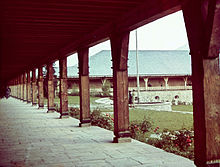 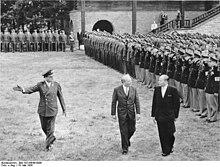 On August 24, 1934, Robert Ley , the head of the German Labor Front , visited the building site. The entire complex was built from autumn 1934 as the NSDAP Ordensburg Sonthofen according to plans by the architect Hermann Giesler of the German Labor Front for the National Socialist German Workers' Party (NSDAP) until 1942 and served as the Adolf Hitler School . The most prominent student was the actor Hardy Krüger (1941 to 1944). From 1936 to 1941 the Reichstag deputy Robert Bauer was in command of the Ordensburg , followed by Theo Hupfauer .

In the last year of the war, the Ordensburg also served as a hospital ( military hospital ).

The facility is located in the south of Sonthofen above the Iller valley . The Tower, the palace , on the west side to the east corner of the main building of the whole Gebäudezug is about 160 meters long. The length of the side wings is about 85 meters. The dining room in the south of the Ordensburg has a length of 116 meters. In the spirit of the National Socialist gigantomania , the complex was planned with huge buildings and expansion. 16 bells from the Franz Schilling bell foundry in Apolda were hung in its bell tower for a carillon . With these bonds to a Christian church, National Socialism wanted to emphasize its claim as the then new religion of modern man. The training castle was initially planned for around 400 people. The first topping-out ceremony took place on October 19, 1935. On November 23, 1937, Adolf Hitler visited the Ordensburg and gave a speech in which he u. a. There was talk of the desired character of a National Socialist: persistent, tenacious, but also, if necessary, ruthless . On May 5 and 24, and on June 21, 1944, Heinrich Himmler gave speeches to officers from the Chief Army Armaments Office and commanders of the Replacement Army and General Army Office , where he openly discussed the overall plan for the extermination of the Jews in Europe and at the same time justified the murders. Also on June 21, 1944, the Nazi chief ideologist Alfred Rosenberg gave a political speech on the subject of Europe.

After the war ended, the western Allgäu initially came under French occupation . The French military took over the castle. From February 1947, the US armed forces set up the central training facility for the US Constabulary special unit there . From May 1951 to February 1952, the castle was a basic training center for the US Air Force .

Renaming and use by the Bundeswehr from 1956

In 1956 the castle passed into the possession of the newly founded Bundeswehr and was named after the resistance fighter and former chief of the Army General Staff , Colonel General Ludwig Beck . Among other things, the Army NCO School  I (HUS I) was located in the Generaloberst Beck barracks from 1964 to 1972 .

The school for military police and staff service of the Bundeswehr was relocated to the Hanover location in the Emmich-Cambrai barracks in mid-2009 . After the Federal Ministry of Defense was considering giving up the castle and selling it for civilian use, State Secretary Christian Schmidt announced in a press conference on April 18, 2008 that it would continue to be used by the Bundeswehr.

As part of the fundamental reform of the Bundeswehr decided in 2010, the stationing concept in 2011 envisaged reducing the Sonthofen location from 1120 posts (as of October 26, 2011) to 590. The Grünten and Jäger barracks in the city area were given up, the ABC and self-protection school was relocated from the Jäger barracks to the Generaloberst Beck barracks after the general renovation . In August 2012 the newly established fire protection center of the Bundeswehr (ZBrdSchBw) moved here .

A negotiation procedure had already been carried out in 2008 for the basic renovation, restructuring and expansion of the barracks area, in which the Stuttgart office of Wulf Architekten was awarded the contract. The total construction costs (as of April 1, 2009) were estimated at around 100 million euros. The entire construction work should initially be completed at the end of 2018, due to the unexpectedly extremely dilapidated structure of the listed buildings, there were delays and completion was rescheduled for 2022. The foundation stone for the renovation and expansion of the barracks took place on May 3, 2016, and the topping-out ceremony for the € 22.4 million lecture hall building, which is the heart of the renovation, followed on May 24, 2019.

Rumors about extensive tunnel systems below the barracks do not correspond to reality. There is only one tunnel to what was subsequently an empty house below the barracks, which has now been demolished. In addition, there are unfinished supply tunnels and underground shooting ranges that are not used. The Ordensburg uses a local heating system , as was common with compact barracks at the time .

Instead of digging deep foundations down to load-bearing layers, the decision was made when erecting some buildings to remove the soil to the load-bearing layers and to build several basement floors. Local aid organizations (fire brigade, THW and disaster control) occasionally use the areas that are no longer used for emergency exercises.

The castle is under ensemble protection .