The title of this article is ambiguous. See Hardy Krüger (disambiguation) for other uses. 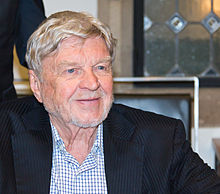 Eberhard August Franz Ewald "Hardy" Krüger ( born April 12, 1928 in Berlin ; † January 19, 2022 in Palm Springs ) was a German film actor , radio play speaker , voice actor and writer . He was one of the most successful German actors of the 1950s and 1960s. After establishing himself as a film star in Germany, he was featured in international film productions such as Einer kam durch , Hatari! , The Flight of the Phoenix , Barry Lyndon , The Arnhem Bridge and The Wild Geese are world famous. He also moderated television programs and campaigned against right-wing extremism .

Eberhard August Franz Ewald Krüger was born in Berlin in 1928, the son of the engineer Max Krüger (manager of the Berliner Tanklager-GmbH, BeTaLag ) and his wife Auguste Meier. He had a sister. The family moved to Berlin-Biesdorf in the 1930s , where Krüger grew up.

In 1941, at the age of thirteen, at the request of his parents, he came to the elite boarding school at Ordensburg Sonthofen , one of the Nazi- oriented Adolf Hitler Schools (AHS) belonging to the Hitler Youth . His schoolmates included Jakob Muth and Theo Sommer . Until 1944, Krüger was educated here for a future leadership position in the Nazi state , with his career aspirations being an engineer.

During his school days in Sonthofen , Krüger was selected in 1943 to play the apprentice Heinz Baum, known as "Bäumchen", for the Nazi propaganda film Junge Adler , directed by Alfred Weidenmann . The film was shot in the UFA studios in Babelsberg in 1943 and was released in cinemas in May 1944.

On the advice of Wolfgang Liebeneiner , Krüger became an extra at the Hamburger Schauspielhaus and spokesman for the NWDR . After moving to Hanover , his acting talent soon crystallized. In the 1950s he became a popular film star in Germany, but found German post-war cinema too shallow, which is why he increasingly looked out for international offers.

His portrayal of the fighter pilot Franz von Werra in the British war film One came through made him well-known in English-speaking countries in 1957. In the period that followed, he was seen alternately in German and international productions until the early 1960s, with the quality of the German films improving after his return from England in 1957 ( Der Fuchs von Paris , Banktresor 713 , Confession, Dr. Corda! , the two Käutner productions The Rest is Silence and The Goose by Sedan as well as Boomerang and Two under a Million ) increased noticeably.

After the war he was one of the few German actors to have an international film career; he now called himself Hardy Krüger . He worked in numerous productions up until the 1980s , including Howard Hawks ' animal catcher film Hatari! alongside John Wayne , in the mercenary flick The Wild Geese alongside Richard Burton and Roger Moore , in the star -studded plane crash drama The Flight of the Phoenix by Robert Aldrich starring James Stewart , Richard Attenborough and Peter Finch and in The Red Tent , a Soviet one -Italian co-production with Sean Connery and Claudia Cardinale . In France, he played a German captain in the desert war drama Taxi nach Tobruk alongside Lino Ventura and Charles Aznavour , and took on the male lead in the drama Sundays with Sybill , which won the 1963 Oscar for Best Foreign Language Film .

Due to his Nordic appearance (blonde hair and blue eyes), Krüger was often cast as a Wehrmacht officer of the Second World War, especially in English-language films, for example in the all-star movie The Bridge at Arnhem by his Flight of the Phoenix comrade-in-arms Attenborough and in the War comedy The Mystery of Santa Vittoria as the antagonists of Anthony Quinn and Anna Magnani . However, he also received roles with positive character traits that were supposed to embody the "good Germany".

In the 1980s, Krüger increasingly withdrew from the film business and devoted himself more to writing and his show Weltenbummler . In 2011, after more than two decades, he was back in front of the camera for the ZDF TV film Family Secrets - Love, Guilt and Death alongside Dennenesch Zoudé . In doing so, he explained that he has not retired from acting entirely, but has become choosy about the roles offered. 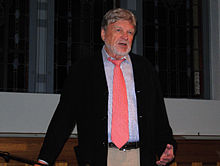 In 1970 Krüger began a second career as a writer. He published several novels , short stories and personal reports in which he was able to draw on his experiences as a well-travelled cosmopolitan .

Through the experiences of his youth, particularly shaped by the Second World War, Krüger campaigned against right- wing extremism for many years . Among other things, he supported the Amadeu Antonio Foundation .

Krüger took part in the documentary Von Werra by Werner Schweizer . Without comment, the film describes the rise of the Nazi aviator hero Franz von Werra during the National Socialist era . The images and quotes cited by the director speak for themselves. The screenplay is based on the dissertation Zwischen Ancien Régime und Moderne: Die Adelfamilie von Werra by historian Wilfried Meichtry . Krüger, who had acted in Werra 's 1957 film, reads his notes and describes his own childhood.

Krüger's escape from the Prisoners of War Camp at the end of the war is contrasted with the escape from Werras to New Orleans . The sequence of the scenes, the interweaving of the actions, the documents and themes are intended to contrast the filmic characters in the double portrait. As a youngster at an elite Nazi school like Franz von Werra, Krüger dreamed an instrumentalized and very specific “ dream of flying ”. Like von Werra, Krüger also played a role in Nazi propaganda.

Later, Krüger's views became more critical when he became acquainted with films by Jewish directors. In dealing with his own history, he states in the documentary Von Werra that his life and that of Franz von Werra ran in opposite directions from a certain point in time. After being taken prisoner by the British, von Werra did everything in his power to return to Nazi Germany. Krüger, on the other hand, describes that he later did everything to escape the Nazi dictatorship and also to get out of Germany at the end of the war. Krüger is asked about his own understanding of the role in Einer durch , as well as about the function of his portrayal in post-war Germany .

Signatures of Hardy Krüger and Anita Krüger in the guest book of the city of Cologne on the occasion of the press conference in Cologne's historic town hall , 2013

During the 1960s and 1970s, Krüger owned and resided in the Hatari Lodge in Tanzania at the foot of Mount Meru , which served as the setting for the film of the same name .

From 1978 he lived in his third marriage with the American photographer and author Anita Park in California and Hamburg . Until 2013, the family lived in a log cabin near Lake Arrowhead in a wooded area of ​​the San Bernardino Mountains above Los Angeles . He then resided in Palm Springs , where he died in January 2022 at the age of 93.