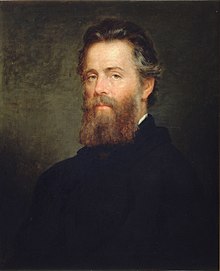 Herman Melville in May 1870

Herman Melville , born as Herman Melvill , (born August 1, 1819 in New York City , New York , † September 28, 1891 there ) was an American writer , poet and essayist . His sea ​​novel Moby-Dick is one of the most important works in world literature .

Herman Melville was the third of eight children of the import merchant Allan Melvill, who came from Scottish immigrants, and Maria Gansevoort Melvill, who came from an originally Dutch patrician family. Allan Melvill also came from a respected family. As a businessman, however, he showed little talent. In order to be able to finance an upper-class lifestyle, he went into debt considerably. His company in New York City went bankrupt in 1830 , whereupon he tried to keep the large family afloat as a seller in a fur shop in Albany . In 1831 Herman had to leave school. The father died a year later, mentally and physically exhausted. After his death, the mother changed the family name to "Melville". Herman worked as a commercial assistant in a bank, as an assistant on his uncle's farm and helped out in his brother's fur shop.

In 1839 Melville was briefly hired as a cabin boy on a mail ship on the route from New York to Liverpool , England . He then tried his hand at a primary school teacher in New York City, but gave up this position again in 1840 and set sail on January 3, 1841 in Nantucket on board the whaler Acushnet . But the conditions on the fishing trip to the Pacific seemed so unacceptable to Melville that in 1842 he ' deserted ' during the first stop on the island of Nuku Hiva ( Marquesas ) . He escaped with the sailor Richard Tobbias Greene and they fled together through the mountains to reach the valley of Taipivai, where they were captured by the Typees. After a few days, Melville's companion managed to escape from captivity, while Melville, injured in the leg, observed the lives of the Typees for four weeks.

He escaped from Nuku Hiva on the Australian whaler Lucy Ann and came to Tahiti ( Society Islands ). There Melville was arrested on board the Lucy Ann because of his participation in the rebellion, but was able to escape from a prison to Moorea . He then hired as a helmsman on the whaler Charles and Henry to Nantucket and settled in April 1843 Hawaii to sign off. In August of the same year he was hired in Honolulu as a simple seaman on the North American frigate United States and returned to Boston , Massachusetts in October 1844 with a stopover in Peru . In 1846 he wrote his first novel "Taipi" followed by "Omoo" in 1847. Both books were quickly received by his readers. In Boston he married Elizabeth Shaw on August 4, 1847. They had two daughters and two sons, whose older son took his own life when he was 18 and the younger, Stanwix, died of tuberculosis when he was 35.

In 1849 Melville traveled to England to deliver the White Jacket manuscripts to his local publisher . He made trips to Paris and the Rhineland . In February 1850 he returned to New York City. In the same year, the Melvilles bought a small farm called Arrowhead near Pittsfield , Massachusetts, on which they stayed until 1863, with the money of their father-in-law Shaw . The building is now listed as a National Historic Landmark on the National Register of Historic Places . During this time Melville ran the court, wrote his books and occasionally gave lectures on his experiences in the Pacific.

From 1856 onwards Melville was plagued by severe rheumatism and his family and father-in-law urged him to take a vacation trip that took him to England, where he met the writer Nathaniel Hawthorne , the Mediterranean Sea and the Holy Land . He returned in May 1857.

In 1860 he sailed on the clipper Meteor under the command of his younger brother Tom for San Francisco , California . Although he had originally planned a trip around the world , he soon hurried back from there by steamer. In 1863 he sold the Pittsfield farm and moved to New York. However, from the 1860s onwards he was no longer able to make a living from writing, although he was still literary to the end. Therefore, in 1863, he accepted a position as customs inspector at the port, which he held until his retirement on December 31, 1885.

Herman Melville died at the age of 72; his grave is in Woodlawn Cemetery in the New York borough of Bronx . 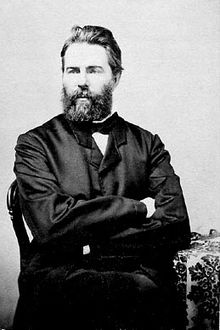 Also in 1850, immediately after acquiring the farm, Melville began to process the experiences on the Acushnet and the Charles and Henry . The novel, first published in England in three volumes under the title The Whale and dedicated to Hawthorne, tells the story of the fishing trip and story of the whaling ship “Pequod” and its captain Ahab, who is obsessed with the hunt for the legendary white sperm whale , from the perspective of the first-person narrator Ismael was. He hunted the whale with a doggedness that led to the destruction of the ship and his own death. In addition to this central plot, the author's philosophical, semi-scientific, historical and mythological considerations are predominantly woven in. 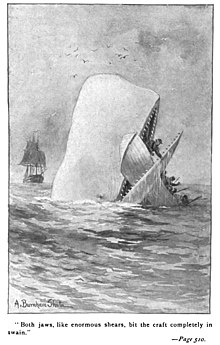 Illustration from an 1892 edition of the novel Moby Dick

Already on his South Seas voyage in 1841 Melville had met the captain Owen Chase (whom Melville called Chace ) and before that he had met his son. The son showed him the book written by his father at the time in the position of chief mate about the sinking of the whaler Essex after a sperm whale attack, of which only a few copies existed. It was not until 1850, however, through the efforts of his father-in-law, Shaw, that Melville came into possession of a copy of this book in Nantucket. The beginning of the tragedy described in this book - the sperm whale attack - impressed Melville so much that he turned it into the brilliant end of Moby Dick .

In addition, Melville drew on numerous literary works: William Shakespeare , Ralph Waldo Emerson , Thomas Carlyle and also works by his friend, Hawthorne , who lived near him , were on his reading list. In August 1850 the work was largely finished, but did not reach the publishers until the following year.

Melville wrote the following to his British publisher Richard Bentley in 1851:

“In the latter part of the coming autumn I shall have ready a new work […] a romance of adventure, founded upon certain wild legends in the Southern Sperm Whale Fisheries and illustrated by the authors own personal experience, of two years & more as a harpooneer […] I do not know that the subject treated of has ever been worked up by a romancer; or, indeed, by any writer in any adequate manner. "

"In the coming late autumn I should be finished with a new work [...] an adventure novel based on certain wild legends from the sperm whale fishing areas in the south, embellished with the author's own personal experiences from his more than two years as a harpooner [...] me I did not know that the subject under discussion was ever adequately dealt with by a novelist, indeed by any writer at all. "

Only about 3,000 copies of Moby Dick were sold during his lifetime .

The short story Bartleby, the Scrivener , published in 1853, is considered one of Melville's most important works and a forerunner of existential and absurd literature. His short story Benito Cereno , published for the first time in 1855, is also counted among the most important shorter stories of Melville and classic highlights of American short prose.Its method of indirection and an ironic perspective narrative technique shaped a narrative method that was later developed and perfected by Henry James .

The verse epic Clarel from 1876 with 18,000 verses about a pilgrimage to the Holy Land was printed in 300 copies during Melville's lifetime, most of which had to be crushed. When he died in New York City in 1891, he was busy revising his last work, Billy Budd, Foretopman , which was only published in 1924 and taken by Benjamin Britten as the basis for the opera Billy Budd .

Melville's first two novels, in which he processed his South Seas stories, were great successes. When he then turned away from the naturalistic adventure novel, his works no longer satisfied critics and audiences.

Melville's work was already forgotten when he died; in the library catalog of Yale University , Moby Dick was only listed in the cetology (the science of marine mammals) category and was collecting dust. It was not until the 1920s that a circle of New York literary scholars, including Carl van Doren (1885–1950), Lewis Mumford , Carl van Vechten and Raymond Weaver (1888–1948), helped his work to gain recognition.

With Moby Dick , Melville created an extremely exciting and complex adventure novel, a parable for the invincibility of nature and human destiny.

Melville belonged to the Young America group, whose concern was to promote American national literature as a sign of cultural emancipation from the aristocratic- feudal culture of Europe, especially England. The American scene was to be represented, both geographically and socially and politically. Such American literature should go beyond the representation of actual conditions to capture the democratic zeitgeist as a vision of an ideal future society.

German editions of the present