The title of this article is ambiguous. Further meanings are listed under Henry James (disambiguation) . 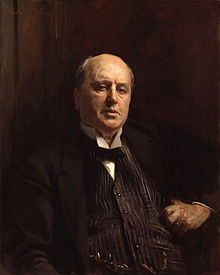 Henry James grew up in a wealthy family. His father, Henry James Sr., was one of the most respected intellectuals, whose friends and acquaintances included Henry David Thoreau , Ralph Waldo Emerson and Nathaniel Hawthorne . From a young age, James was introduced to the classics of British, American, French and German literature. In his youth, Henry Jr. toured Europe and studied in New York, London , Paris , Bologna , Bonn and Geneva . He began studying law at Harvard Law School at the age of nineteen , but soon found that he was closer to literature.

James began contributing to American magazines at the age of twenty . A year later he published his first short story, A Tragedy of Errors . From 1866 to 1869 and from 1871 to 1872 he was a contributor to The Atlantic Monthly magazine and the Nation newspaper . His first short story, Watch and Ward , appeared as a serialized story in the Atlantic Monthly in 1871 . James wrote them on his trip to Venice and Paris. The story is about a bachelor who adopts a twelve-year-old girl and later even wants to get married.

After living in Paris for a while, from where he wrote various articles for the New York Tribune , he settled in England in 1875 and became a British citizen in 1915. The shock of the beginning World War I had prompted James, among other things, to protest against the US policy of non-interference. In England he wrote for The Yellow Book, among others . During his first years in Europe, James mainly portrayed the lives of Americans abroad, particularly in Europe. In 1905 he visited his homeland for the first time in 25 years and wrote Jolly Corner , which is based on his observations in and around New York and tells the nightmarish story of a man who, after a long absence from New York, returns to his father's house and his inlive there Experience life as an American in the form of meeting a doppelganger.

Between 1906 and 1910 he revised various narratives and stories for the "New York Edition" of his collected works, which was published in 1911 by Charles Scribner's Son. The first two volumes of his autobiography , A Small Boy and Others and Notes of a Son and Brother were published between 1913 and 1914 . The third volume was published posthumously in 1917. Henry James died on February 28, 1916 at the age of 72, having recently suffered a heart attack.

James described himself as a "sexual self-sufficient", throughout his life he had many close friendships with men.

In 1898 he was elected to the American Academy of Arts and Letters .

In James' multi-layered work, the antagonism between the "old world" Europe with its long cultural tradition and the naivety of the "new world" America plays an important, perhaps even the central role. Another characteristic of his work are the psychologically complex and carefully drawn female figures, such as in Portrait of a Lady .

He described Honoré de Balzac and George Eliot as special role models ; He once said of Balzac that he learned more about writing from him than from anyone else. Probably the best-known quote about his own writing comes from The Art of Poetry from 1885:

"A novel is in its broadest sense a personal, a direct impression of life: that, to begin with, constitutes its value, which is greater or less according to the intensity of the impression."

Johann Wolfgang von Goethe also had a significant influence on the literary work of Henry James . James, who spoke excellent German, spent his life studying his writings in Bonn and was considered an excellent expert on Goethe's works. Wilhelm Meister in particular had a lasting meaning for James in all creative periods.

The extremely detailed description of the inner workings of his characters makes James appear as a modern writer. He is considered a master of indirect characterization and was among other things a model for the stream of consciousness style ; particularly well-known examples of this technique can be found in James Joyce ' Ulysses and in Manhattan Transfer by John Dos Passos .

While Henry James was practically a cult author in the Anglo-Saxon world, he has faded into the background in the German-speaking world. A smaller James renaissance was brought about not only by various publishing activities (Manesse, Aufbau Verlag, etc.), but also by the various film adaptations.

James published a total of 20 novels , 112 short stories , twelve dramas as well as various travel books and literary reviews. His most important publications include