American Academy of Arts and Letters 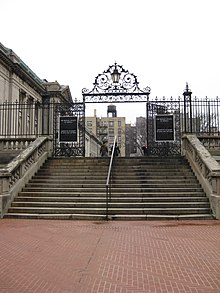 Entrance to the Academy's grounds, which it shares with the Hispanic Society of America

The American Academy of Arts and Letters , formerly also known as the National Institute of Arts and Letters , is a society in the United States based in Washington Heights , Manhattan , with 250 members from the fields of writing, visual arts, and composition . The aim is to promote and maintain the general interest in high-quality art by honoring outstanding artists with a series of prizes and awards, as well as exhibitions of the respective works.

The society emerged from the American Social Science Association (ASSA) founded in Boston in 1865 . This included several departments such as jurisdiction or training. H. Holbrook Curtis , one of the members, submitted in September 1898 to the ASSA President Simeon Baldwin the proposal to found a subsidiary whose orientation and organization should be based on the Institut de France . The idea was approved by the organization, and after many of the invitations had been accepted, the first meeting of the newly formed National Institute of Arts, Science and Letters took place on February 11, 1899 , at which Charles Dudley Warner was elected provisional president. In September of that year the company decided whether to remain a subdivision of ASSA or to become a self-governing apparatus. The members opted for the latter and in the course of this, science was deleted from the name.

William Dean Howells, first member and first president from 1904 to 1920

Initially, a maximum of 150 members was permitted. From 1904, 30 of them formed the “Academy”, the inner core of the institute, which was made up of elite members and was modeled on the Académie française . The first seven members elected by the Institute were William Dean Howells , Mark Twain (Samuel Langhorn Clemens), Edmund Clarence Stedman (1833–1908) and John Hay in the Literature Department, Augustus Saint-Gaudens and John La Farge ( 1835–1910) in the visual arts and music department was represented by Edward MacDowell . These seven then elected a further eight, who in turn appointed new members until the maximum number was finally reached. In 1907 this was increased to 250 (200 members of the "Institute" and 50 "Academy" members). In 1916 the company was officially recognized by the US government in a so-called congressional charter .

The organizational form, divided into institutes and academies, lasted until 1976, when the two-tier system was combined under the name American Academy and Institute of Arts and Letters . In the period that followed, there was only one supervisory board and one common budget. In addition to the 250 living US citizens, 75 foreign artists were also given honorary membership. However, internally there was still a dichotomy. It was not until 1993 that the two-tier organizational structure was completely abandoned by combining the institute and academy by name and giving them the current name American Academy of Arts and Letters . Today the board consists of a president, three vice-presidents for visual arts, three vice-presidents for literature, two for music, as well as a treasurer and a secretary. Since 2012, Henry N. Cobb has served as President for three years.

Membership is reserved for those who are nominated by one of the members themselves. The election is for life and the elected does not have to pay membership fees or other taxes. A new candidate can only be nominated when a seat becomes vacant due to the death of a member. In the first few years, except for Julia Ward Howe, who was admitted in 1907, only men were represented in the Academy. It was only with the election of Edith Wharton , Margaret Deland , Agnes Repplier and Mary E. Wilkins Freeman in 1926 that the female sex was also increasingly introduced into society.

See also: Category: Member of the American Academy of Arts and Letters

The individual committees of the Academy have donated a large number of prizes in the various categories since it was founded. A nomination is only possible here by members of the Academy. The only exception is the Richard Rodgers Awards for Musical Theater , for which you can also apply:

Prizes and awards currently being given

Previously given prizes and awards