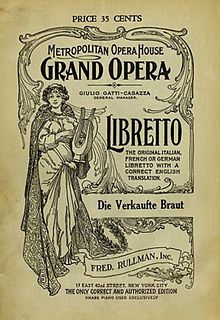 Title of the libretto for the performance of Bedřich Smetana's The Bartered Bride at the Metropolitan Opera in 1908.

The libretto ( Italian “little book”, diminutive to libro “book”; plural: libretti ) is the text of an opera , an oratorio , an operetta , a musical or a cantata ; in a broader sense, scenarios for ballet and pantomimes are sometimes referred to as libretti. The term appeared in the early 18th century but didn't really become common until the 19th century.

The literary research discipline that deals with the libretto as a literary genre is librettology .

The story of the libretto begins with the story of the opera. Since this emerged from the attempt to revive the ancient tragedy (thought of as a unity of word and song) , it is of literary as well as musical origin. Accordingly, the opera libretto already played a key role in the early days of the genre.

The relationship between music and text or between composer and librettist has changed again and again over the years. In France and Italy well into the 18th century, librettists were highly respected artists who were naturally recognized as poets. The best-known representative of this epoch is Pietro Metastasio , whose librettos were not only set to music by numerous composers - sometimes several times - but sometimes also appeared on the theater stage as spoken pieces. Later, the librettists usually step back behind the composers in the perception of the public and research. Since the Romantic era in particular , there have also been composers who wrote their libretti themselves, such as B. Albert Lortzing , Richard Wagner (for all works), Arrigo Boito ( Mefistofele , Nerone ) or Hans Pfitzner ( Palestrina ). Such double talents, which create a linguistically and dramatically coherent libretto and implement it musically, are the exception.

There has been a long-term collaboration between the librettist and composer. B. between Philippe Quinault and Jean-Baptiste Lully , Pietro Metastasio and Johann Adolph Hasse , Carlo Goldoni and Baldassare Galuppi , Ranieri de 'Calzabigi and Christoph Willibald Gluck , Lorenzo Da Ponte and Wolfgang Amadeus Mozart , Eugène Scribe and Giacomo Meyerbeer , Arrigo Boito and Giuseppe Verdi . In the first third of the 20th century, Hugo von Hofmannsthal showed, through the works he created together with Richard Strauss , how librettistic activities can be combined with literary standards. Important librettists in the period after the Second World War included WH Auden ( The Rake's Progress , premiere 1951; music: Igor Stravinsky ), Chester Kallman ( The Visitors , premiere 1957; music: Carlos Chávez Ramírez ) and Ingeborg Bachmann ( The young Lord , Premiere 1965, music: Hans Werner Henze ). At the same time the literary opera, the adaptation of works from spoken theater for the opera stage, became an important model; in this area worked librettists such as B. Claus H. Henneberg ( Lear , premier 1978; based on Shakespeare / Eschenburg ; music: Aribert Reimann ) or Thomas Körner ( Die Walls , premier 1995; based on Les paravents by Jean Genet ; music: Adriana Hölszky ).

The fact that the librettists used to be more respected than their musical partners earlier (e.g. in Mozart's time) can be seen from the shape and size of the two names on the theater announcements. Later the pendulum swung to the side of the composer; in a shortened form, they were and are often named as the sole author to this day (e.g. “ The Magic Flute by Mozart ”). Other examples, however, show that it is possible to mention the author and musician on an equal footing and that it can also be used in general language - e.g. B. in the English-speaking world " The Mikado by Gilbert and Sullivan ", " Oklahoma! von Rodgers and Hammerstein ”or in German-speaking countries“ Der Rosenkavalier von Strauss and Hofmannsthal ”.

The dispute as to whether the text or the music is the more important component in opera is as old as the opera itself. Mozart's famous saying "at an opera the poetry of the music must absolutely be the obedient daughter" are countered by many contrary statements. What is certain, however, is that a genuine libretto only develops its full - also literary - quality in connection with the setting. It must therefore provide stimulation for the music on the one hand, and space on the other hand - the word must neither be too withdrawn nor come to the fore.

Since sung text is on the one hand more difficult to understand than spoken text, and on the other it takes more time, the libretto shows a characteristic alternation of ruffles and repetitions. From a literary point of view, it often has a rambling-pleonastic and sparse-striking effect at the same time. Comparisons between opera libretti and purely literary arrangements of the underlying material show that the libretto reduces complexity in favor of musical feasibility. Complex characters become types, complicated decision-making processes become moods, "tirades" become "catchphrases" ( Ferruccio Busoni ). The resulting shortening of the plot benefits the music, giving it the time it needs to unfold. At the same time, the unthinkable time stretching through music in drama - up to a standstill in arias or ensemble tableaus - offers the opportunity to sound out moods and emotional states in detail.

Accordingly, the action in the libretto is not linear, but jumps from one affect situation to the next. References backwards and forwards, references to invisible actions, as are common in drama, are completely omitted in opera.

This ideal-typical structure applies largely to the opera libretto of the 17th to 19th centuries. It is largely canceled by Richard Wagner , who uses his leitmotif technique to cover the text with a dense network of non-linguistic semantic connections. Even for the literary opera of the 20th century, it only applies to a limited extent.