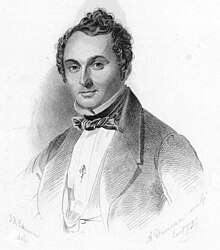 Gustav Albert Lortzing (born October 23, 1801 in Berlin ; † January 21, 1851 ibid) was a German composer , librettist , actor , singer and conductor . He is considered the main representative of the German game opera , a German-language variant of the Opéra comique .

Albert Lortzing was born as the son of the former leather merchant Johann Gottlieb Lortzing (1775–1841) and his wife Charlotte Sophie nee. Seidel (1780–1845) born. The parents founded the Berlin theater company "Urania" and turned their hobby into a profession. They gave up the business and went as actors (" jugglers ") through almost all German provinces. In 1811 the family moved to the local theater in Breslau . In the summer of 1813 they had an engagement in Bamberg , then in Coburg , then in Strasbourg , in Baden-Baden and in Freiburg . The son's first stage appearance was in the Kornhaus at the Freiburg Minster , where the 12-year-old delighted the audience with comical poems during the breaks "to lively applause".

From 1817 the Lortzing family belonged to the ensemble of Josef Derossi in the Rhineland, who appeared as traveling actors in the Alten Komödienhaus Aachen , in Bonn , Düsseldorf , Barmen and Cologne . The young Lortzing became the audience favorite in the roles of nature boy, “young lover” and bon vivant , but also as a singer ( tenor ). He received the musical and especially compositional tools as a student of the Berlin composer , music teacher and Sing-Akademie director Carl Friedrich Rungenhagen , in whose choir he also sang as a tenor.

Lortzing and the actress Rosina Regina Ahles married on January 30, 1824 . The couple had eleven children, six of whom survived childhood. From autumn 1826 the young Lortzing couple belonged to the court theater in Detmold , which also played in Münster and Osnabrück . On September 3, 1826, Lortzing was accepted into the Masonic lodge "For Resistance and Concord" in Aachen. In Detmold he composed a. a. the oratorio Die Himmelfahrt Christi , which was premiered in Münster, admittedly with a reprimand from the Münster district president, since the actor Lortzing “has absolutely no reputation as a composer”. 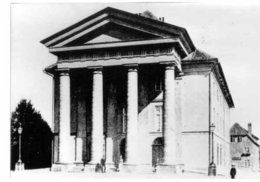 Statue of Lortzing by Gustav Eberlein in the Tiergarten, Berlin

In Detmold there was a dispute with the eccentric poet Christian Dietrich Grabbe , which was soon settled. Lortzing had composed incidental music for Don Juan and Faust , Grabbe's only drama that came on stage during his lifetime ; he himself appeared in the role of Don Juan, his wife as Donna Anna, for which Lortzing received an enthusiastic review from an anonymous in a Frankfurt newspaper. Of course, the drama "of this brilliant poet" was also praised. The reviewer was the ingenious poet himself - it was not uncommon back then to advertise yourself in the form of reviews .

On November 3, 1833, the young Lortzings made their debut at the Leipzig City Theater , where Lortzing's parents had also been members of Friedrich Sebald Ringelhardt's ensemble since 1832 . Here Albert Lortzing became a member of the artists' club Tunnel over the Pleiße , and in 1834 he joined the Leipzig Masonic Lodge " Balduin zur Linde ". From 1833 to 1838 Lortzing lived with his family in the Leipzig Naundörfchen (no.1008), then moved to Frankfurter Strasse (no.1086, next to the Great Funkenburg ) and only in the spring of 1844 into the garden house of the Funkenburg, which is often the only Leipzig Residence is indicated. 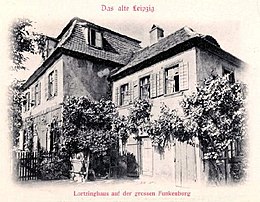 Lortzing was extremely popular in the Leipzig ensemble, and particularly shone in Nestroy comedies. His inclination to improvise, to deviate from the approved role text, made him a problem for the theater police. Even his first comic operas did not have it easy under the Leipzig censorship. The opera Zar und Zimmermann , which is about narrow-minded authorities, premiered on December 22, 1837 in Leipzig. Lortzing himself sang Peter Ivanov. But it wasn't until the Berlin performance in 1839 that it became an acclaimed success and brought about the breakthrough.

Memorial plaque on the house at Luisenstrasse 53 in Berlin-Mitte

In 1844 Lortzing became Kapellmeister at the Leipzig City Theater. In April 1845, his “rheumatic complaints” were the pretended reason for dismissal. The repeated protests of the public did nothing to change his release. In an open letter, which almost everyone in the ensemble signed, he had objected to measures taken by the city council. Between 1845 and 1847 Lortzing worked as Kapellmeister at the Theater an der Wien . The comic opera Der Waffenschmied was written here in 1846 and in 1848 - in keeping with the contemporary freedom movement (see March Revolution ) - he wrote the text and music of his political opera Regina , named after his wife, a work that, in today's terms, is about industrial action , but also about suicide terror. The last full-length opera in 1849 was his fairy tale satire on the military state of Prussia Roland's miners , in which z. B. is asked in the refrain : "And that should be a world order?"

Tomb on the Second Sophien Cemetery in Berlin

In 1848 he lost his engagement and, in order to survive with the large family, had to take on another engagement as an actor ( Gera , Lüneburg ). In 1850 he became Kapellmeister at the newly opened Friedrich-Wilhelmstädtisches Theater in Berlin . Albert Lortzing died on the morning of January 21, 1851, overworked and heavily in debt. For the funeral at the II. Sophien-Friedhof in Berlin-Mitte four days later, u. a. Giacomo Meyerbeer , Heinrich Dorn , Wilhelm Taubert and Carl Friedrich Rungenhagen . Lortzing's theater colleagues had lined his coffin with the colors black-red-gold - reminiscent of the failed revolution of 1848/1849 . The honorary grave of the city of Berlin with a memorial, placed by the members of the Ducal Court Theater in Braunschweig, is located in Dept. IX-6-47 / 48.

In many German cities he is remembered with a Lortzingstrasse.