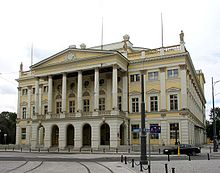 The opera house at night

View of the tiers in the building

View of the stage during a performance

The Breslau Opera (Polish: Opera Wrocławska ) is an institution that plays operas in the former Wroclaw City Theater. The opera house is located in the Stare Miasto district of Wroclaw near the Dorotheenkirche .

In 1841, the building of the City Theater in Breslau replaced a considerably smaller and at the time already very dilapidated theater building by Carl Gotthard Langhans from 1782. The new building on the elegant Schweidnitzer Straße was based on a design by his son, the architect Carl Ferdinand Langhans .

After two fires in 1865 and 1871, the house was considerably rebuilt by Carl Johann Lüdecke and Karl Schmidt, but it was not destroyed in the two world wars. The stage building was expanded from 1954 to 1956 according to plans by Andrzej Frydecki towards the palace square, continuing the classicist-eclectic facade structure. The flood of the Oder (and the neighboring city ​​moat ) in 1997 caused severe damage, which was removed during the renovation and fire protection refurbishment completed in 2005.

In 1804, the German composer Georg Joseph Vogler recommended the then 17-year-old Carl Maria von Weber to the Breslau Opera as Kapellmeister. He became the first general music director in music history - even if not officially called that . From 1830 to 1864 Eugen Seidelmann was Kapellmeister of the Stadttheater.

On September 8, 1945, the performance of the Polish Opera in Wroclaw resumed with the premiere of Halka by Stanisław Moniuszko (directed by Stanislaw Drabik).

More recently, the Breslau Opera has also attracted attention with spectacular large-scale productions - which took place temporarily in the Jahrhunderthalle - as well as its Wagner productions.