Auditorium. Since the renovations around 1901 and 1960 with five instead of six tiers. 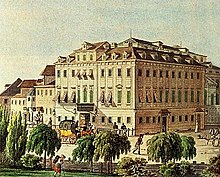 Façade around 1815 on the Wien River

KW Zajicek: State of the front around 1900 before the renovation by Fellner & Helmer

The Theater an der Wien is a traditional theater on Linke Wienzeile , in Vienna's 6th district of Mariahilf , which is operated by the United Theater in Vienna . Since the beginning of 2006 it has been nicknamed Das neue Opernhaus . The theater currently has 1,129 seats and 50 standing places . 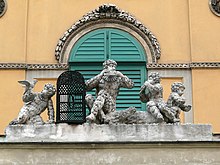 Papageno and his siblings from Peter v. Winters The Magic Flute, part two. the maze 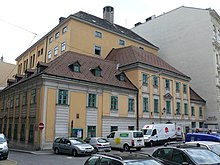 The theater from the rear, which has hardly changed since 1801 (Lehárgasse)

While wealthy (Viennese) society was able to fulfill its need for theater at the two court stages ( National Theater and Kärntnerthor Theater ) in the 18th century, the less well-to-do classes used performances from (often sensational ) stages until the late 18th century of the suburbs. Before 1800 there were a few suburban permanent theaters, but these usually only lasted for a short time. Only three suburban theaters survived : the kk priv. Theater in der Leopoldstadt (1781), the Theater in der Josephstadt (1788) and the Theater an der Wien (1801).

The near situated and opened in 1787 and a temporary performing Freihaustheater 1799 was financially ruined when Emanuel Schikaneder , librettist of The Magic Flute and head of the house since 1792, the theater passionate merchant Bartholomew Zitterbarth (1751-1806) March 1, 1799, the Freihaustheater to 63,266 Gulden ceded. Zitterbarth had already invested 130,000 guilders in the property and hoped that the purchase would give Schikaneder the privilege of building a new theater that had existed since 1786. However, this has failed. Zitterbarth and Schikaneder - both Freemasons - became partners, and in 1799 Zitterbarth acquired the property, while Schikaneder applied for a building permit for the planned theater, which was confirmed by Emperor Franz II on April 3, 1800 .

The Empire- style building, which opened after just thirteen months of construction on June 13, 1801, is only preserved on the outside today on Lehárgasse and (heavily modified) on Millöckergasse, where the Papagenotor (by the Pest sculptor Jacob Schroth ) the builder as Papageno shows with his younger siblings in the heroic-comic opera Das Labyrinth (1798, continuation of the Magic Flute ). In 1803 and 1804 Ludwig van Beethoven lived for some time in a rear wing of the theater building while composing his opera Leonore .

On January 9, 1808, the privately owned Schauspielhaus an der Wien was honored as the only Viennese theater to be one of the newly weds during the celebrations for the marriage of Emperor Franz II to Maria Ludovika Beatrix of Modena on the 6th of the previous month and to organize their family's performance to be visited. The opera Armide with music by Christoph Willibald Gluck was performed in the house, which was lavishly adapted for this purpose .

The owner and director of the Theater in der Josefstadt , Franz Pokorny (1797–1850), recognized as extremely charitable , also acquired the Vienna Theater in May 1845 (which had to be reopened at the end of August 1845 as structurally and stage-technically adapted) and took over its management. In the revolutionary year of 1848, Pokorny corresponded to the prevailing thinking of the street with the (officially approved) renaming of the house to National-Theater an der Wien . The name change took place on April 13, 1848 with the 13th performance of Roderich Benedix ' Das mooste Haupt or Der long Israël and subsequently resulted in the imperial court staying away from the theater and in 1849 completely distancing itself from the house by resigning from the lodge . Pokorny had taken over financially in those years with the commitment of big names such as Jenny Lind and Giacomo Meyerbeer . In 1848 regular theater operations were no longer possible, and Pokorny fired the entire opera staff on September 1 of that year.
After the death of Franz Pokorny on August 5, 1850, his son Alois Pokorny (1825–1883) took over the management of the National Theater an der Wien. As early as 1852, the pecuniary conditions of the theater were so shattered that due fees were rarely paid out. This situation did not change in the following years either. In April 1860 Pokorny rented the stage for a certain sum to Matteo Salvi (1816–1887), an Italian singing teacher who, although the “ entire audience ” expressed his disapproval because of his performance , was appointed director of the Court Opera a little later . In the 1861/62 ball season, Pokorny's brother, Captain Anton Pokorny , who was appointed sequester , intended to improve the box office by holding balls, but poor organization connected with an accident at the first event kept the audience away. At the end of March 1862 the house was closed until further notice. In May 1862 the bankruptcy sought by Alois Pokorny was judicially accepted and his management of the house ended.

After performances of works from all theater genres, including antics by Nestroy and other representatives of the old Viennese folk theater , the "Golden Operetta Era " followed with works by Johann Strauss and Carl Millöcker , and later the "Silver" with Franz Lehár as the most famous representative. During this time the five months closed BEEN House of September 1, 1862 has been to 26 July 1869 by the until then at the Theater in Timisoara and just recently was Friedrich Strampfer passed, then to 1875 by Marie Geistinger and Maximilian Steiner , then up to Steiner's death in 1880 by him alone and then by his son Franz Steiner . In 1884 Alexandrine von Schönerer took over the management of the house, at times together with Camillo Walzel and Franz Jauner . From 1902 to 1911 the management was in the hands of Wilhelm Karczag and Karl Mathias Wallner; the theater programs were then designed by Remigius Geyling .

After the Second World War , the house initially served as an alternative quarter for the ensemble of the bombed Vienna State Opera . Legendary performances of Mozart operas took place here under Karl Böhm and Josef Krips , some of which are also documented on sound carriers.

In 1960 the City of Vienna acquired the theater from the previous owners, the Marischka family, in order to use it as a festival theater for the Wiener Festwochen and guest performances.

Since 1962, the Theater an der Wien has also served as a venue for the Vienna Festival every year during the summer months and for a few years also for the Klangbogen. In 2000 and 2007 the theater hosted the Nestroy Awards.

The Theater an der Wien, together with the Raimund Theater and the Ronacher, form the United Stages of Vienna .

With the Mozart year 2006 the tradition of the contemporary light muse was abandoned and the theater became a venue for operas, especially Viennese classical music. Music manager Roland Geyer , who until then had emerged as director of the KlangBogen and OsterKlang festivals , was appointed as its artistic director . As the third opera house in the city, the building, which is part of Wien Holding's organizational structure and is owned by the city, competed with the two traditional houses of the Vienna State Opera and the Vienna Volksoper, which were run as federal theaters . In contrast to the institutes mentioned, the Theater an der Wien is not run as a repertory theater with its own ensemble, but is played in blocks according to the stagione system . Conceptually, in addition to the focus on Mozart and Viennese Classicism, the house wants to position itself on the one hand with performances of baroque operas and on the other hand with a turn to the 20th and 21st centuries (world premieres, rediscoveries). The opera productions are performed by various orchestras, including by the Vienna Symphony Orchestra , the Vienna Radio Symphony Orchestra and the Concentus Musicus Vienna .

The inauguration concert on January 8, 2006 was conducted by Plácido Domingo . As part of the KlangBogen Festival, which took place for the last time in 2006 and was integrated into the performance of the Theater an der Wien, the Semperdepot was also used as a second venue (premiere of the opera Don Juan comes from the war ).

Façade to the left Wienzeile and Millöckergasse, built after 1900 by Fellner & Helmer , condition since 2006

Front building to the Naschmarkt . Musical porch on the portal changed after 2005.

2015, the opera was Peter Grimes by Benjamin Britten at the Theater an der Wien, directed by Christof Loy and conducted by Cornelius Meister restaged. This production received the International Opera Award in 2016 .