The Raimund Theater in Vienna

The Raimundtheater (own spelling Raimund Theater ) is a theater in Vienna's 6th district of Mariahilf in Wallgasse 18-20, which today belongs to the United Theaters in Vienna and mainly serves as a venue for musicals . The renovation and conversion was completed at the end of May 2021.

Logo of the Raimund Theater 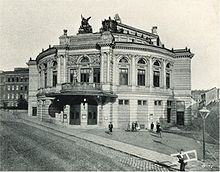 The Raimund Theater around 1898

The entrance area during the season of We Will Rock You 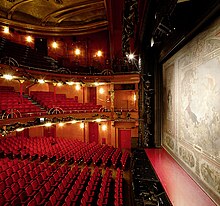 Auditorium of the Raimund Theater

The theater, named after the Austrian playwright Ferdinand Raimund , was founded in 1893 by an association of 500 citizens of the Mariahilf district, built according to designs by the architect Franz Roth (1841–1909) and, fully electrically lit, on November 28, 1893 (first performance on November 27, 1893) ceremoniously opened with Raimund's magic game Die gefesselte Phantasie ( prologue written by Alfred von Berger )

Until 1896 the theater was under the direction of Adam Müller-Guttenbrunn . He and his artistic advisor Hermann Bahr turned the theater into a speaking stage with classic folk plays that were supposed to counterbalance the upper-class “operetta decadence”. Alexander Girardi , Eleonora Duse , Max Reinhardt , Louise Dumont and Adele Sandrock performed here.

In 1907 the Jewish director and theater director Sigmund Lautenburg (1851–1918) took over the management of the Raimund Theater, but only for a short time. He commissioned Carl Otto Czeschka to design the sets and costumes for a new production of the play " The Nibelungs " by Friedrich Hebbel . The performance was not performed for various reasons, but a direct result of Czeschka's intensive preoccupation with the Nibelung theme for the Raimund Theater were the drawings that served as the basis for the small book "Die Nibelungen" published by Gerlach & Wiedling.

Under director Wilhelm Karczag , the operetta found its way from 1908 , for example through the in-house production “ Der Zigeunerbaron ” by Johann Strauss in 1908 or Robert Stolz 's “Glücksmädel” and the Dreimäderlhaus based on Franz Schubert's music . From 1921 to 1924 mainly speaking pieces were played again under director Rudolf Beer .

After 1945, under Rudolf Marik (1900–1976), who ran the house from 1948 to 1976, the operetta with Johannes Heesters , Marika Rökk , Zarah Leander and other well-known actors and singers reached a climax. Many famous actors began their careers at the Raimund Theater , such as Hansi Niese , Paula Wessely , Attila Hörbiger and Karl Skraup .

In December 1968 the Raimundtheater celebrated its 75th anniversary with the performance of the operetta " Der Bettelstudent " by Carl Millöcker .

The festival premiere on May 23, 1969 was the operetta Giuditta by Franz Lehár , in which Gretl Schörg (1914–2006) made another brilliant appearance before she withdrew completely from stage life a little later.

After 1976 musicals were played sporadically. In 1984 and 1985 the theater was completely renovated. Since 1987 it has belonged to the United Bühnen Wien (GmbH) together with the Theater an der Wien and the Ronacher and has since been mainly a venue for musicals .

Well-known musicals in German such as Die Schöne und das Biest with Ethan Freeman and Caroline Vasicek in the leading roles, Tanz der Vampire with Steve Barton and Cornelia Zenz , Wake Up with Alexander Goebel and Rainhard Fendrich and, most recently, Barbarella with Nina Proll in the The title role and Eva-Maria Marold both had their world premieres at the Raimund Theater . In February 2005, the German-language premiere of Romeo and Juliet with Lukas Perman and Marjan Shaki in the two title roles took place. Other roles included Carin Filipčić as wet nurse, Mark Seibert as Tybalt, Rasmus Borkowski as Mercutio and Mathias Edenborn as Benvolio and Thomas Mülner as Count Paris.

The musical Elisabeth was played on the occasion of his 20th birthday from 2012 to 2014. Four LED translation boards were installed in the hall , on which the pieces have since been translated into English.

The Nestroy Theater Prize , initiated in 2000, was awarded for the first time in 2011 in the Raimund Theater .

The Raimund Theater will hold 1,400 seats after renovation. So far there have been 1,195 seats and 40 standing places, but that could vary from production to production.

In March 2018, the culture committee of the Vienna City Council decided to provide 12.76 million euros for the renovation of the theater. The theater has been closed for renovation work for around 14 months since June 17, 2019, the reopening was originally planned for autumn 2020 with the musical Miss Saigon . In June 2020 the reopening was postponed to January 2021. In October 2020 it was announced that the premiere had been postponed again to autumn 2021. On September 26, 2021, the Raimund Theater reopened with the "WE ARE MUSICAL - The Great Opening Gala". The premiere of Miss Saigon will take place on December 3, 2021.