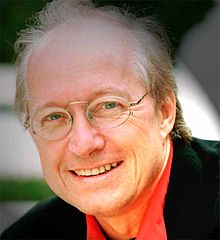 Michael Kunze wrote the lyrics of numerous German and international pop music hits and was awarded the Grammy and ECHO Lifetime Awards , the GEMA music author award and 79 gold and platinum records. He is the author of several books and has developed a number of television shows. He also translated the lyrics of many English-language musicals into German.

Michael Kunze was born in Prague as the son of Dita Roesler (actress) and Walter Kunze (a doctorate in law as well as journalist and caricaturist for the Prager Tagblatt ) , but spent his childhood and primary school on the edge of the Black Forest near Freiburg im Breisgau.

In 1954 the family moved to Stuttgart and in 1959 from there to Munich . In Stuttgart he attended the Schickhardt grammar school and in Munich the Klenze secondary school . As a scholarship holder of the Maximilianeum Foundation , he studied law, philosophy and history at the Ludwig Maximilians University in Munich . He received his doctorate in law on witch trials in the 16th century and specifically the story of a family of rural drivers who were tried for witchcraft, severely tortured and burned. This resulted in his book Road to Fire .

Kunze began writing songs while still a student. Some of his early works appeared on an LP by the Hamburg folklore group City Preachers . Although this production was not a commercial success, it earned him the first recognition of the German music industry.

In 2016 he received the Brothers Grimm Medal from the Göttingen Academy of Sciences for his work on legal history . He gave the lecture to the academy about Rudolf von Ihering as a student in Göttingen. He also published a biography of the Baden revolutionary Gustav Struve ( Der Freiheit ein Gasse ).

Together with his wife Roswitha, Michael Kunze discovered the 20-year-old folk singer Peter Maffay . His first record Du reached number one in the German hit lists in 1970 and was awarded a gold record .

There were also international productions with Gitte Hænning , Herbie Mann , Julio Iglesias , Nana Mouskouri , Gilbert Bécaud and Sister Sledge . Here he used the pseudonym "Stephan Prager" at times (based on his son Stephan and his hometown Prague).

With the group Silver Convention and their album Save Me and the single Fly, Robin, Fly that was released from them , Kunze reached number one on the American Billboard and Cashbox charts. He also wrote the text for the German contribution to the Eurovision Song Contest 1977 , Telegram, for the group .

At the height of his success, he temporarily withdrew from pop music to write books. His work Road to Fire. About life and death in the time of the witch madness. was published in 1982; the New York Times reviewed the 1987 English-language edition.

In the 1980s, Kunze rediscovered his old love for the theater. His collaboration with Harold Prince on the German translation of the musical Evita was not only the beginning of a long-term friendship with the legendary Broadway producer, it also opened the door to a series of successful adaptations of the most famous Broadway musicals for the German stage.

His translations of the works of Andrew Lloyd Webber ( Song and Dance , Cats , Das Phantom der Oper , Aspects of Love , Sunset Boulevard ) and especially Stephen Sondheim ( Company , Into the Woods ) made him one of the increasingly numerous friends Known genres. He also wrote the German versions of Wicked , A Chorus Line , Der kleine Horrorladen , Kuss der Spinnenfrau , The Hunchback of Notre Dame , The Lion King , Mamma Mia! and Aida (by Elton John ).

Michael Kunze has been writing his own musicals since the early 1990s. He calls them drama musicals because all the dramaturgical elements serve to tell the story.

With his friend Sylvester Levay he created Hexen Hexen in 1990 and the musical Elisabeth in 1992 , which has been shown in Vienna for over ten years and premiered at the Theater an der Wien . This was followed by Dance of the Vampires (in collaboration with Roman Polański , music by Jim Steinman ) in the Raimund Theater in Vienna and Mozart! - The musical , in the Theater an der Wien.

The musical Rebecca (based on the novel by Daphne du Maurier ) premiered in October 2006 at the Raimund Theater in Vienna. A Broadway premiere was to follow in 2012 and then in 2015. Due to various difficulties, including financing, it was announced in 2017 that Rebecca would not be played on Broadway. His new musical Marie Antoinette (music: Sylvester Levay) premiered in Japan on November 2, 2006 and was also shown in Germany at the Musical Theater Bremen between January and May 2009 . Both cases were directed by the internationally known opera director Tamiya Kuriyama, head of the New National Theater in Tokyo. He also wrote the libretto for the musical Matterhorn ( music : Albert Hammond ), which had its world premiere in February 2018 at the Theater St. Gallen .

Michael Kunze is the librettist of the pop oratorio Luther , which was performed nationwide as a contribution to the Luther year 2017.

Michael Kunze lives with his wife Roswitha in Hamburg.