Mozart! is a German-language musical with texts by Michael Kunze and music by Sylvester Levay . Kunze and Levay had previously created the successful musical Elisabeth together . Mozart! is based on the life of Wolfgang Amadeus Mozart . The music styles rock , pop and classical are combined in 53 songs.

In the autumn of 1809, the doctor and natural scientist Doctor Anton Mesmer and one of his servants are led to the grave of their deceased husband by Constanze Nissen - the widow of Wolfgang Amadeus Mozart - in the St. Marx cemetery . For this she demands payment. Arrived at the grave, Mesmer remembers the appearance of the boy prodigy forty years ago on the open-air stage in the baroque garden of his Vienna villa.

Back then, in 1768, the conductor Leopold Mozart - with the assistance of his daughter Nannerl - presented his son Wolfgang Amadé. The boy is sick, but still amazes the guests with his skills or because of it. But the Baroness von Waldstätten ( Martha Elisabeth von Waldstätten ) admonishes the father not to overwhelm his son. It is also what makes it possible for the little one to keep a box that he found.

Nine years later. The child prodigy has become a young man who shows his sister Nannerl a red skirt that he financed from winnings. But when the imperious father sees the skirt, he does not find it appropriate for Mozart. When he found out that Wolfgang had bought it through Spiel, he had Nannerl bring back the rock and Mozart wrote the serenade for the prince.

In the musical, the role of Wolfgang does not write the scores. This is done by the ever-present porcelain child Amadé, who, as the personification of genius, is always busy composing. While the porcelain child is now writing the serenade, Wolfgang struggles with his relationship with his father, who obviously does not accept him for who he is and who would like to be.

Meanwhile, Count Arco ( Karl Joseph Maria Graf Arco ) provides a gala dinner for Prince Archbishop Hieronymus von Colloredo in the Vienna Residence . He appears and admonishes all servants to humility and discipline and warns of disregard of the poor house. So he is portrayed as a strict ruler who wants to have a firm grip on all who serve under him. It is already clear that these two characters cannot get along. When Mozart then - belatedly - appears with his father and is so incredibly proud of his work that he does not consider it appropriate for Colloredo, the latter tears up the score and expresses his displeasure by saying nothing more from his father or Wanting to hear a son named Mozart. Leopold is shocked, but Wolfgang seems rather happy about this decision. Now Wolfgang would like to travel to look for a job in other big cities. Finally, Leopold has to consent. He sends the boy on a trip with his mother. The viewer learns the course of the journey through conversations between the market women and Wolfgang's sister. She is hopeful. But Count Arco slows their zeal by announcing that the Prince Archbishop will now let his influence play. The father, who is very worried, writes a letter to his son, in which he advises him to lock his heart in iron.

In Mannheim, the Weber family, who are in financial difficulties, put their first-born daughter Aloysia on the composer. The company succeeds. Wolfgang gives money and announces his intention to make her his prima donna.

Of course, Leopold also found out about this and ordered his son to Paris immediately. Once there, he still sends money to the Webers so as not to lose the daughter. Because of this, he and his mother become poor themselves. She eventually dies in the two miserable quarters. Mozart realizes the cruelty of life and has to return to Salzburg impoverished, which amuses the servants and Emanuel Schikaneder , the director of a theater group currently stationed there, alike. Now the father has gained leverage through the debt to finally bind Wolfgang to himself. For this reason he also rejects an offer from the Baroness von Waldstätten.

A few months later. Colloredo travels to Vienna and - despite Count Arco's fears - orders Mozart to his court. Once in the capital, the composer meets the Webers again. Aloysia is now married, and so he falls in love with Constanze when they both watch a group of performers. He moves into the family's apartment.

When Leopold found out about this, it became clear to him that the chances of the son's return have been greatly reduced. Bitter and disappointed, he sinks the trophies of the former child prodigy in the Salzach. Nannerl - who failed in the attempt to comfort her father - it is becoming more and more clear that, despite her musical talent, she will probably not lead an artist's life in the future.

In Vienna, however, the Prince Archbishop broke his promise to arrange an audience for Mozart with the Emperor. Instead, he wants to send him back to Salzburg. Wolfgang confronts him and decides no longer to submit to a master, but to be free. After an argument, Mozart is kicked out of his service. He decides to start over, but has to realize that he needs the hated porcelain child in order to achieve his goals. He wants to get rid of his shadow, but doesn't know how.

Back in 1809. The servant starts digging. Mesmer asks Mrs. Nissen questions about her deceased husband that she does not want to answer. He remembers that the composer was strange at times.

In 1781, after a concert by Wolfgang Amadé Mozart, the audience discussed his skills and opportunities. They all agree: whoever wants to be successful has to be able to intrigue and recognize intrigues.

Wolfgang moved out with the Webers, which made his love affair with Constanze even stronger. However, after an argument, she runs away from home, straight into the arms of her lover. The two are surprised by Cäcilia Weber and her lover Johann Torwart. Cäcilia and Johann force the composer to sign a contract that obliges him either to lifelong maintenance payments or to marry. Constanze - does not agree - takes the contract from her mother and tears it up.

A nightmare kidnaps Wolfgang to a masked ball. Pressed by companions in life, he seeks an answer to the question of what is blind, fragile, feminine, moody, invisible, incorruptible, unfaithful, indescribable, smaller when lingering, smaller from amazement, but shy and larger through sharing. Finally his father brings him to the answer: Happiness. Then it disappears. Wolfgang wants to follow him, but is stopped by the Baroness von Waldstätten and admonished not to chase after his father all his life, but to grow up.

In the meantime, the father in Salzburg does not agree to his daughter Nannerl's love as long as there is no dowry. She then asks her brother for the money that is actually due to her, which the father gave him. Wolfgang is ready to give her the money, but seemingly friends bring him around who make him drunk and play cards with him.

After a long night, Constanze explains to the audience that she thinks it would be a shame to miss a dance and thus shows her easy-going character. Mozart can offer her such a life. But he still lacks reconciliation with his father for his success. He comes to Vienna and is initially enthusiastic about what his son has achieved, but when he realizes that his former child prodigy no longer needs him, his mood changes - inexplicably for his son. Finally, Wolfgang hands him the box from Mesmer's garden, which is filled with money. The son wants to use the money to buy his father out of the service of the Prince Archbishop. Leopold angrily throws the box at his son's feet and says that he owes him more than just money. Then he goes off. Mozart is disappointed because without this reconciliation it is not possible for him to be happy about the success. But it is also clear to him that he still has to go his own way. The situation seems hopeless, which is why the "strange things", as Mesmer described them, set in. At this moment he is also attacked by his genius because he is not satisfied with the life he is leading.

Meanwhile, the prince archbishop is thinking about his former servant. He never forgot Mozart. He wants to take him back into his service. So he summons Leopold, who does not, however, consider the venture to have any great chance of success. Instead, he offers his grandson as a new child prodigy. That leads to his release.

Mozart's success in Vienna is waning. His income, which is still more than sufficient, is increasingly flowing into the pockets of the greedy Cäcilia Weber. When he refuses to continue paying, he learns of his father's death. In St. Stephen's Cathedral, the lawsuit becomes an indictment. But both suffered because - according to Mozart - God's miracles do not come for free. While still in the cathedral, he was commissioned to write a requiem for a stranger.

In 1789 - after a street discussion about the French Revolution - Wolfgang was commissioned to set the Magic Flute to music. His client Emanuel Schickaneder offers Wolfgang an actress as a source of inspiration. The two disappear into a summer house and Amadé begins to compose the music for the Magic Flute. The figures float through the garden while a medley of opera music is played. The opera will be a huge success.

Mozart, however, is sick. Amadé is working on the Requiem. Wolfgang realizes that it is for himself. When the child runs out of ink, Wolfgang - as so often before - stabs him in the arm and continues to write with his blood. But when that is no longer enough, the porcelain child stabs him unmoved in the heart. Mozart dies.

Now time and space merge in the finale. The dead body falls victim to people who are hungry for money and souvenirs. All partners stand around Mozart's deathbed. Dr. Mesmer raises a human skull dug up by the servant in the cemetery. Nannerl finds the mysterious box. The melody that sounds is reminiscent of the child prodigy.

Wolfgang Amadeus Mozart is portrayed as "torn apart". In his endeavors for a free life and an artistic development without constraints, he often stumbles with his environment. (Especially with his father and with Archbishop Colloredo). On the stage, Mozart is supported by Amadé, the “porcelain child” who is only visible to him. It embodies the little Mozart, works tirelessly on new symphonies and is ultimately responsible for Mozart's death.

Michael Kunze and Sylvester Levay have next to Mozart! also created Elisabeth (the story of Sissi ), Marie Antoinette and Rebecca as a musical. 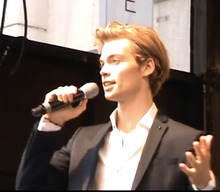 Song sequence on the highlight CD from the world premiere