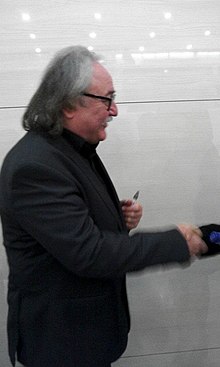 Sylvester Levay (born May 16, 1945 in Subotica in Vojvodina , Serbia ) is a Hungarian composer . He had success in the pop genre in the 1970s , composed for film and television and, since the 1990s, musicals .

Sylvester Levay began his training at a music school when he was eight . Sylvester Levay won his first composition competition at the age of 15. From 1962 he worked all over Europe. In 1971 he recorded the progressive rock album Vita nova (on organ and keyboards ) with Eddy Marron and Christian von Hoffmann .

In 1972 he moved to Munich. During this time he met Michael Kunze , with whom he has worked successfully ever since. Their first major joint successes were the productions for Silver Convention and Penny McLean in the "Munich Disco Sound" ( Save Me , Fly, Robin, Fly , Get Up and Boogie , Lady Bump ). Fly, Robin, Fly was also the first title produced in Germany to reach number one on the US Billboard charts. In Munich he also worked with Udo Jürgens and Katja Ebstein . Between 1977 and 1980 Levay composed and produced for Elton John , Donna Summer and others. Levay orchestrates all of his works himself and has mastered various instruments such as piano , saxophone , clarinet , flute and organ .

From 1980 to 2000, Sylvester Levay spent a great deal of time in Hollywood , concentrating on composing film music . He became a member of the National Academy of Recording Arts Sciences (NARAS) and the Academy of Television Arts & Sciences (ATAS). He lectured on film composition at the American universities of the University of California, Los Angeles and the University of Southern California .

Levay has dedicated himself to musicals since the 1990s . Most recently he wrote the musical Rebecca together with Michael Kunze , which premiered in September 2006 at the Raimund Theater in Vienna and has continued to be performed since then (as of 2017).

Levay he lives near Munich and in Vienna, has been married to his wife Monika for 25 years and has a daughter and a son.