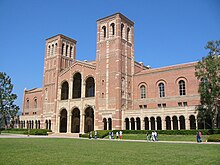 The University of California, Los Angeles ( UCLA ; German University of California, Los Angeles ) was founded in 1919 and is the third oldest campus of the University of California . UCLA is one of the most prestigious universities in the world and is located in the Westwood district of Los Angeles . In particular, the business school, the John E. Anderson Graduate School of Management, achieved top rankings every year. In the current USNews ranking 2009, across all US business schools, it came in 7th, ahead of Harvard Business School and Berkeley's Haas Business School . TheUniversity has been located in Westwood Village between Bel Air and Holmby Hills since 1927 , previously on Vermont Avenue in Hollywood . The university is a member of the Association of American Universities , an association of leading research-intensive North American universities that has existed since 1900. In 1969 she took part in the Arpanet , the forerunner of today's Internet . Together with three other research institutions, this makes it one of the first four participants to be connected with one another using Internet technology. There are currently five Nobel Prize winners teaching at UCLA. In 2014 more than 105,800 students applied, which is a new record and, as in previous years, UCLA is the most popular university with the most applicants in the country. It was voted 8 best in the Times Higher Education Ranking and 12th best university in the world by the Academic Ranking of World Universities . The UCLA Film & Television Archive is one of the most important film archives in the world.

UCLA is considered one of the most respected universities in the world.

In the worldwide ranking of subjects, UCLA ranks 2nd in linguistics, 5th in medicine, 6th in psychology and 8th in mathematics.

The UCLA sports teams call themselves the Bruins . The university is a member of the Pacific-12 Conference . The mascot is the "Bruin Bear". The USC Trojans and the UCLA Bruins have traditionally been a strong rivalry.

Personalities of the athletics department

The main attractions on campus are Royce Hall and Franklin D. Murphy Sculpture Garden. UCLA includes the Armand Hammer Museum of Art in the Westwood district (mainly Impressionism, including Monet ) and the Fowler Museum on campus (art history from around the world).