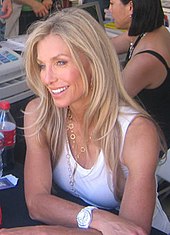 Heather Anne Thomas (born September 8, 1957 in Greenwich , Connecticut ) is an American actress , author and political activist . She became known in German-speaking countries through the personification of Jody Banks in the US television series Ein Colt for all cases .

Thomas is the daughter of Gladdy Lou Ryder, a special needs teacher who taught in the Santa Monica and Malibu school districts. She attended Santa Monica High School until 1975, then transferred to UCLA's School of Theater, Film and Television (TFT) .

1984 Thomas began at the urging of her mother and fellow actor Lee Majors , a drug treatment to overcome their cocaine addiction and joined the support group Cocaine Anonymous (CA) in which the Alcoholics Anonymous is comparable. In August 1985 she married Allen Rosenthal, one of the co-founders of Cocaine Anonymous; the marriage was divorced in September 1986. That same year she was hit by a car while crossing San Vincente Boulevard in Los Angeles and suffered fractures in both legs; she had to spend almost a month in the hospital and undergo multiple operations.

At the end of the 1980s she was in a relationship with the Austrian singer Christian Anders , whom she met in 1986 while filming the film The Stone of Death .

Her television debut was Heather Thomas in 1971 at the age of 14 years with the NBC telecast Talking with a Giant resulted in which it interviews with famous people. During her studies she played minor television roles, including 1978 in David Cassidy: Man Under Cover and 1979 in the sitcom Co-Ed Fever radio station CBS . The series was originally supposed to have six episodes, but was discontinued after the first episode aired. Thomas later said: "It was discontinued after the third commercial block." (Engl. "It was canceled after the third commercial.")

As Jody Banks , she had her greatest success on the side of Lee Majors from 1981 to 1986 in the US television series A Colt for All Cases . During this time, Thomas was also a sought-after pinup girl and became addicted to cocaine. After the series ended and her addiction had been overcome, supporting roles followed in several films, most of them " B-Movies ", as well as guest appearances in television series such as Love Boat .

In 1987 Thomas was nominated for the Canadian Gemini Award in the category "Best Supporting Female Role" for her portrayal in the television film Ford: The Man and the Machine . That same year she played Marilyn Monroe in the TV movie Hoover vs. the Kennedys: The Second Civil War . In 1998 Thomas ended her acting career.

After that, Thomas tried his hand at scriptwriting. After writing nearly 40 scripts, Touchstone Pictures bought a script called School Slut for a six-figure sum. Since it was not made into a film, she acquired the rights to produce it herself. In April 2008 Thomas' first novel Trophies was published by HarperCollins .

Together with her husband, media attorney Harry M. Brittenham, Thomas supports liberal political candidates and interest groups. Since 2003, the couple has hosted a monthly fundraising breakfast at their Santa Monica home known as The LA Cafe. According to newsmeat.com, Thomas has raised more than $ 280,000 in donations to date.